Improving the administration of marine and coastal spaces

The concepts proffered in paper generally are in relation to developed jurisdictions that have fully embraced the Information Age and its significant investments in digital data management. Since 2001, and as a means of improving the administration of marine and coastal spaces through decision support, interested members of the international geomatics community have increased research efforts towards the development of marine cadastres in various jurisdictions. Among them are researchers from Canada, Australia and the United States of America (USA) (Collier, Leahy and Williamson, 2001; Ng’ang’a, Sutherland and Nichols, 2002; Sutherland, Wilkins, and Nichols, 2002; Barry, Elema and van der Molen, 2003; Binns et al., 2003; Ng’ang’a et al., 2004; Sutherland, 2004; Sutherland and Nichols, 2004; FGDC, 2008). The main focus of this paper is Canada but developments from the U.S. and Australia are briefly discussed.

As with upland management, the general perception is that good governance ofmarine and coastal spaces, through the management of people and their activities in relation to space over time, can be achieved through the management of rights/interests, responsibilities and restrictions. A marine cadastre, built upon the multipurpose cadastre principle [Figure 1], is a system that is envisaged to be able to provide this kind of decision and management support. Figure 1 – Multipurpose Cadastre Concept [AfterDale and McLaughlin, 1988]
The multipurpose cadastre concept envisions the linking of juridical and fiscal cadastral layers with layers of other spatial information occurring in the same space, to provide a more complete set of information about the spatial extent of interest. These other layers could include, among other things, data relating to:

In many jurisdictions these other datasets are managed by various organizations. There is an implication of collaborative, cooperative, or integrative governance arrangements among the stakeholders, for the multipurpose cadastre to ideally be implemented. Jurisdictions vary in their socioeconomic, environmental and institutional requirements and value systems in the management of their coastal and marine spaces. However, common among them with regard to the governance of marine and coastal spaces, is the need for laws, regulations,policies, governance structures and arrangements, personnel, data and data management, and organizations. Spatial Data Infrastructure (SDI), including national, regional and global concepts, provides for cohesive combinations of these components of governance. 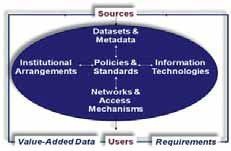 Figure 2 – Spatial Data Infrastructure[After McLaughlin and Nichols, 1994]
Figure 2 shows a conceptualization of a SDI (McLaughlin and Nichols, 1994). A perusal of the components strongly point to collaboration, cooperation or integration of data management systems to provide information for decision support, satisfaction of user requirements, and the production of value-added products to meet the objectives of the various participating stakeholders.

A marine cadastre ought ideally to be envisioned as part of a SDI. From this perspective, and taking into consideration the multitude of overlapping rights/ interests occurring in marine spaces, the 3-dimensional nature of marine spaces to be managed, the variety and number of stakeholders involved, and the traditional silo approach to governance, the development of marine cadastres as part of SDIs offer improved decision support in the management of these spaces (Ng’ang’a et al, 2004; Masser, Rajabifard and Williamson, 2008).

In consideration of the foregoing discussions, this paper outlines the latest development relating to the marine cadastre concept in Canada. Developments in the USA and Australia in terms of web applications placed in the public domain are also reviewed. Comparisons are made with a conceptualization ideal. The motivation for the paper is linked to recent developments in Canada where interest in the marine cadastre concept has been renewed outside of academe, and some support was given to the development of a prototype system. A number of interested stakeholders were contacted and a task force formed to give input on the direction in which a Canadian marine cadastre might be developed, and to seek necessary funding. Although not all stakeholders participated there is in this action a tacit recognition that collaboration, integration or cooperation among stakeholders is essential in the marine cadastre’s development. From the Canadian perspective, these are considered further steps in the administration of marine spaces.

The marine cadastre ideal, based upon a multipurpose cadastre principle, will include 2- and 3-dimensional graphical representations of all rights and interests occurring within the spatial extent of focus. It will include 2- and 3-dimensional graphical representations of other spatial data described above. In other words, visualizations would include volumes and not just plan views of polygons. The visualization of spatial extents of interest would make it easy to determine if rights, interests, and other spatial phenomena are related to the water surface, the water column or pelagic environment, the bed or benthic environment, or the subsoil of the bed. Also included will be all related legal, fiscal, environmental, social etc. textual information. The textual information would be complete in terms of being able determine appropriate laws, regulations, responsibilities, restrictions, stakeholders and all other pertinent multipurpose information about any point in the 3-dimensional spatial extent of interest (Ng’ang’a et al, 2004; Sutherland, 2005).

In the U.S. the Federal Geographic Data Committee’s Marine Boundary Working Group developed a web-based marine cadastre and placed it in the public domain [Figures 3 and 4]. One is able to navigate through the datasets and to seek information about any point. The design concept is multipurpose. Background data simulates the 3-dimensinal form of the seafloor, but the visualization of rights are 2-dimensional. There have been improvements made to the interface in terms of data content (NOAA 2010). Also online is the Australian Marine Spatial Information System [Figures 5 and 6]. This system also provides multipurpose cadastral information by clicking on a point on the displayed map. Custom queries are possible and more information may be obtained than from the U.S. model in terms of, for instance legal interests. 3-dimensional visualization of the seafloor provides a backdrop but the visualization of the rights and interests are 2-dimensional (Geoscience Austalia, 2010). 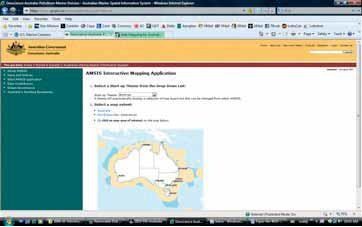 In Canada, between 2001 and 2008, major interest in the marine cadastre was mostly from a few university researchers and even fewer Federal government officials. In 2008 the Coastal and Ocean Information Network for Atlantic Canada (COINAtlantic) (COINAtlantic 2009a), supported by Geoconnections Canada, developed a search utility that locates marine and coastal datasets and offers the user the option to add and display found datasets in a graphic map interface. A sub-component of the COINAtlantic initiative was a prototype marine cadastre proof of concept, using St. Margaret’s Bay, Nova Scotia, as the case study area [Figures 7 and 8] (COINAtlantic 2009b). This was the first time in Canada that any major funding was directed at this type of research, outside of academe. The funding was still small compared to funding received in other jurisdictions (e.g., Australia). Developed using ArcGIS Server the datasets are also 2-dimensional polygons with 3-dimensional characteristics simulated through database designs that added fields indicating whether the rights were related to sea surface, water column, seafloor, or subsurface.
The ArcGIS Server map interface used to develop the prototype allows participating stakeholders, who agree to supply spatial information for inclusion in this type of application, to maintain their own spatial data at their own sites, and in their own data formats, allowing datum and projection transformations to be done on the fly while dynamically incorporating all the various datasets in one interface for presentation and query [Figure 9]. The prototype was developed by storing all collected datasets on one web server, simulating dynamic data sharing possible. The level of dynamic collaborative governance that would allow the sharing of spatial data among stakeholders, in real time, is not yet in place. Fig 9 – Hypothetical Example of Data Sharing via Web Mapping Interface
A workshop was held in St. Margaret’s Bay to demonstrate the prototype’s functionalities to interested stakeholders. The general consensus, especially from community members, was that a marine cadastre would be a useful tool in the management of rights in their community and they would support their provincial government’s involvement in further developments. Natural Resources Canada, the Association of Canada Lands Surveyors, and the Canadian Hydrographic Association have shown interest in developing a national Canadian marine cadastre. A task force comprised some major stakeholder representatives, indicative of the recognition of the importance of collaboration, was set up to take the necessary steps to pursue funding for the effort. That initiative is in process and represents, in the Canadian perspective, a step forward in the development of a national marine cadastre.

The author acknowledges the support of COINAtlantic and Geoconnections, Canada. Also acknowledged is Mr. Daniel Jones, Department of Geomatics Engineering and Land Management, who was an important part of developing the St. Margaret’s Bay prototype proof of concept marine cadastre. Also acknowledged are researchers from the Department of Geomatics Engineering, including Dr. Sue Nichols and Mr. Titus Tienaah, M.Sc.E. student in the same department.

Ng’ang’a S., M. Sutherland and S. Nichols 2002. Determining user needs in a marine cadastre. Published in the proceedings of the Canadian Hydrographic Conference, Toronto, May 2002, CD-ROM.

Sutherland, M. and S. Nichols 2004. The evolving role of hydrography in ocean governance and the concept of the marine cadastre. The Hydrographic Journal, No. 111, January 2004.