I was given the title of this article “How Japan is managing the disaster of this magnitude?” by the Coordinates magazine but I dare to say that Japan is not yet managing the disaster but suffering from the hardships. Though all Japanese people are in mourning the sorrow, I feel it should be my duty as an old scholar to report on the biggest earthquake and Tsunami to the rest of the world. I hope that my report would be useful to prevent the similar misery.

At 2:46 pm on the 11th March 2011, the huge earthquake of M 9.0 (firstly it was 8.8) occurred offshore of Sanriku (north east of Japan) of which epicenter was 500 km long (north-south) and 200 km wide (east-west) in the Pacific Ocean (see Fig.1). Accordingly the damaged areas were also 500km long including a part of Hokkaido (the north island of Japan) to Tokyo. We had many big earthquakes in the past, for example, Kobe Great Earthquake occurred in 1995 but the area of the damage was limited in several 10 km. I was at my house located in the west of Tokyo at the time of the earthquake when I felt danger to stay in my room and jumped out of my house together with my wife. The shaking continued for almost 3 minutes (normally one minute long even in the case of very big earthquake) and repeated many times even after the earthquake. After the earthquake was settled a little bit I switched on TV and came to know that very serious damages were anticipated in the Tohoku Area (north east of Japan) and Tsunami would be coming soon. 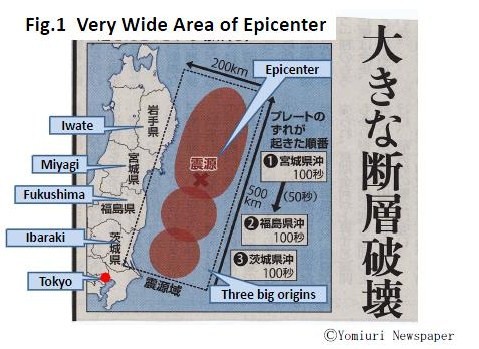 The damages are as follows; 10,0489 dead (confirmed so far), 16,621 missing (still increasing), 2,777 injured, 144,194 houses destroyed, 245,689 evacuated, 2,200 road damages, 56 bridges dropped, 6 fuel power stations stopped, Tohoku Shinkansen and Tohoku Highway seriously damaged (as of 26th March, 15 days after the earthquake). The main damages were from Tsunami which swept away huge number of people, cars, houses, fishing boats, ports and harbors see (Fig.2a and 2b). Quickly measured height of Tsunami is as follows; 23 m at O-funato, 16 m at Minami Sanriku, 15 m at Onagawa, 14 m at Fukushima nuclear power plant area, 13 m at Kuji port, 7~8 m at Kamaishi, 5 m at O-arai etc. The Tsunami hit small coast towns 5 km upstream along river as Sanriku Area has special topography of V shape bay which exaggerates the height of Tsunami. Along the River Kitagami, 5 m Tsunami attacking at the outlet swept away all harbor facilities and boats, at 4 km point a bridge fell down, at 6 km riverside villages were flooded, at 14 km agriculture fields inundated and at 49 km point of water level gauge station the water level suddenly raised by 10 cm one hour after the earthquake. It would be unexpected to have such Tsunami propagation. 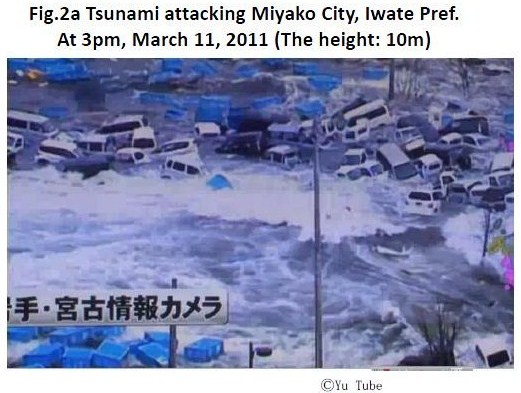 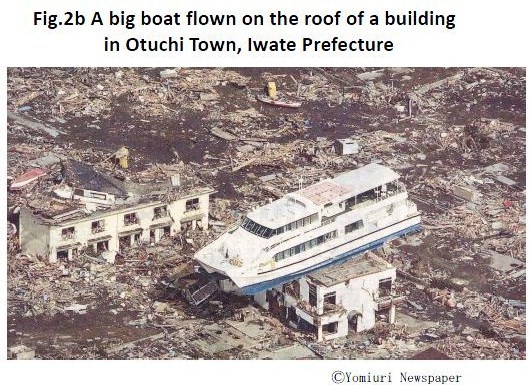 The most serious accident was the destruction of the Fukushima Nuclear Power Plants of which cooling system and electric and electronic facilities were completely damaged by Tsunami (see Fig.3). It resulted in the extraordinary heat up of the nuclear reactors and protected vessels. The atomic radiation was spilled out which polluted air, water and soil including vegetables and milk. People within 20 km radius had to move out of the residence and people within 20 ~ 30 km had to be inside of their houses. The total numbers of evacuated people were 450,000 at maximum not only from the earthquake and Tsunami but also from the nuclear power plant accident. They had to stay at congested houses without light, heater, water, foods, blankets, etc. in spite of cold night of below zero temperature until supporting materials had arrived. 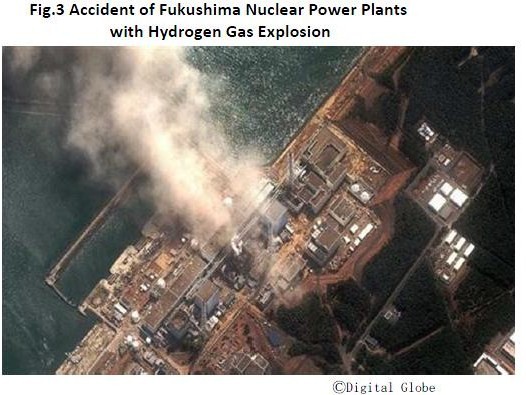 Tokyo, the metropolitan area was also under panic as all trains and subways were stopped which made several million people impossible to go back home or very difficult to move. After 30 minutes from the earthquake, all drinks and foods were sold out at every shop. From the next day, water, foods, toilet papers, etc were also sold out at super markets, department stores, convenient stores and so on. Electricity failures were also started as the electric power stations stopped the operation which brought shortage of electricity. Tokyo Electric and Power Supply Company (TEPCO) had the capacity of 52 million KW before the earthquake which reduced to 31 million KW after the disaster. 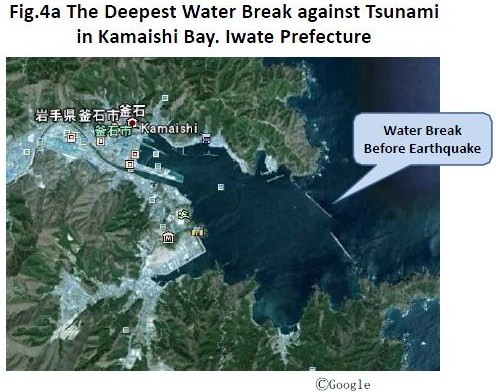 Fukushima Nuclear Power plant was providing about 9 million KW. Serious was the shortage of gasoline as the oil refinery facilities were also damaged. Almost all gas stations and tanks were swept away in the coast areas. It was a big trouble as we could not transport relief supplies to the damaged sites because of lack of gasoline. Even in Tokyo after two weeks, we have to make queue to wait for an hour for gasoline supply which is limited only 10 litters. In addition, almost all ports were damaged by Tsunami, roads and railways were not usable. Only helicopters of the defense agency were rescue parties. Mobile phones and Internet at the sites were not available for long days which made difficult to communicate between safe and damaged areas as well as among family and relatives. Many of survivors lost their mobile phones too. Even with mobile phones, they could not use them as electric services were completely stopped. 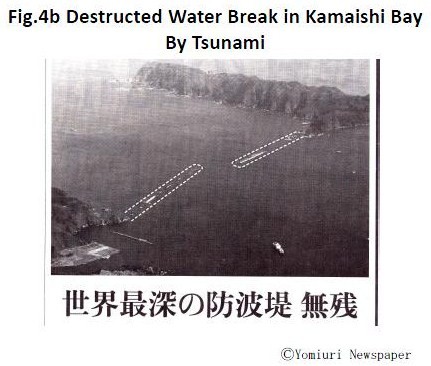 Lessons from the past disasters in Japan

Japanese people were well educated about the evacuation from earthquakes and Tsunami as there were so many terrible disasters occurred in the past. Particularly the area of Sanriku was heavily damaged by the Great Tsunami in 1896 which killed almost 22,000 people including my great grandfather. According to this miserable lesson, many coast towns prepared the construction of water break against Tsunami. For example, Kamaishi City, Iwate Prefecture constructed huge water breaks with 2 km long with 20 m thickness, 8 m height of the crust above the sea level and 65 m depth which has been registered as the deepest water break in Guinness World Records (see Fig.4a and 4b). Taro fishery village, Miyako District, Iwate Prefecture constructed 10 m high water break against Tsunami as the village was most seriously damaged by 1896 and 1933 Tsunami. But those water breaks were completely destroyed by Tsunami this time. The Tsunami was 14 m high this time much higher than the preparedness. Many people said that the Tsunami was beyond the estimation but the Tsunami in 1896 was 38 m high! We should have lessons that the hardware including very high water break cannot rescue people but we need software including how to provide early warning and evacuation system.

In the case of Kobe Earthquake occurred in 1995 which killed more than 6,000 people the establishment of GIS database was so important to recover from the damages. Many local governments started GIS database but everything including computers, databases, backups, even city and town halls/offices were swept away. Most of people lost ID card and passport which made difficult to identify with documented evidence. In several towns, the official registration data bases were also lost as well as town offices.

The world experienced a devastating disaster on 11th March 2011, first the Earthquake of a very high magnitude and afterwards a massive Tsunami. Some authorities say that ‘the magnitude was near the “Black Swan” category’, and the travel time of the wave to the coast was reported to be only about 10-15 minutes, insufficient to inform the nearby communities of the impending disaster. These are conditions where even the most advanced Early Warning System (EWS) cannot make a significant difference. Therefore, the potential to mitigate such disasters in the future will have to be based on vulnerability reduction by adaptation, e.g. in urban planning and construction, based on risk and vulnerability maps.

Another question is the quality and coordination of disaster mapping activities to support response measures. Here it will be necessary to coordinate all efforts in the preparation of adequate Geoinformation on a global scale, as most of the disasters nowadays are not limited by national or regional boundaries. We believe that Geoinformation technologies developed for the purposes of disaster monitoring and management can contribute to assisting all facets of disaster management and alleviating their impacts for such purposes as the rescue of victims. Lastly everyone in the world must learn from the Japanese experiences, their calm behavior in the face of such a devastating event, without losing their well-known disciplined manner.