NSDI in India – through the years

The National Spatial Data Infrastructure (NSDI) initiative in India began in the year 2000.‘NSDI in India: Through the years’ a comprehensive book charts the course of this decade long journey, which is still continuing.

For the first time in India, all events related to NSDI are now brought together in this story by the Coordinates (www.mycoordinates.org) team of Bal Krishna, Shubhra Kingdang, Sanjay Malaviya and Prof P Misra. An attempt has also been made to delve into the reasons why NSDI, after the initial euphoria and despite many efforts, is still no where near being the ‘one-stop’ source of spatial information in a country where the need for the same is growing by leaps and bounds

The book is organised as episodes, and the heading of each episode captures the mood prevailing in NSDI at a particular juncture. While maintaining the chronology of the actual NSDI related events – like meetings, workshops, articles, interviews and press releases – the book highlights the significance of individual events by short commentaries, notes and posers.

The happenings of each year have been summed up in a wrap up section. Other NSDI related documentation like the Strategy and Action Plan (2001), the New National Map Policy 2005 et al has been included in the appendices for easy reference. The effect is a comprehensive compilation of information on NSDI in India. 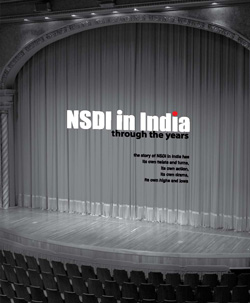