A geo-spatial approach to urban development

Recommendations of the National Commission on Urbanization (NCU), set up in 1985, covered the aspects of emergence of nodal points; special regional characteristics of urban growth; spatial eco-tones of urbanization; spatial distribution of wheat and rice productivity and industrial employment; and spatial planning of settlements . Besides other analysis, it studied the spatial distribution of cities and urban agglomerations in 1971 and 1981 . Accordingly, the Commission came out with a set of recommendations that included a geo-spatial perspective to the pattern of urban settlements at the National scale. It went on to recommend location of urban settlements by population size and function in their regional/ sub-regional context. It highlighted the necessity of delineating properly the planning regions at national level and sub-regions at state level. Identification of 329 Generators of Economic Momentum (GEMs) for development as National priority cities and 49 Spatial Priority Urbanisation Regions (SPURs) (Map 1) were very important recommendations of the Commission from a geo-spatial perspective.

The Commission reminded that a major dimension of the problem of meaningful growth of National cities, viz., Calcutta, Bombay, Delhi and Madras, is the spatial dimension . Unfortunately, no elaborate efforts were made to implement the recommendations of the Commission. Despite two successive National Housing Policies within a span of a decade, the country is yet to evolve a National Urban Policy. Although numerous attempts have been made by the scholars and alike to analyse the spatial distribution of urban settlements in the country , this has not translated into an `official’ approach for spatial settlement pattern planning for urban areas in the country. At the national level, the Planning Commission constituted a National Task Force on Urban Perspective and Policy in 1995. The reports of two (out of 5) technical groups are yet to be finalised. These are expected to provide input for the National Urban Policy . This has been the state of affairs as far as spatial approach to urban India at all levels of planning, i.e. the National, regional (State), city/ town, zonal or area level. 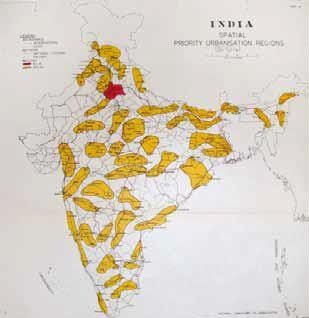 As physical planners always knew and emphasised, solution to many of the urban problems lies in the rural areas or the hinterland. Yet, most efforts in urban planning overlook this aspect. The need for establishing a set of regions for planning purpose was realized in the 1950’s, when the Housing and Regional Planning Panel of the Planning Commission made specific recommendation to this regard. Consequently, 15 agro-climatic regions for approach to agricultural planning were accepted by the Planning Commission. Subsequently, a tentative scheme of 13 macro and 36 meso-regions was formulated. Yet, there was no effort to locate or plan for a (urban) settlement pattern in these regions. Today, while we have a number of Metropolitan Regions and their plans (e.g., those of Delhi, Bangalore, Chennai, Kolkata, Mumbai, and so on), there is no effort to plan or guide their spatial arrangement at a National scale. The mega cites, metropolitan cities and various other large cities are growing spatially, vertically, economically and demographically without reference to their respective locations at the region, state or national level.

A missing ministry of regional (planning and) development

Thousands of crores of rupees are being pumped into urban areas under the Jawaharlal Nehru National Urban Renewal Mission (JnNURM), primarily for the betterment of slums and squatter areas and related infrastructure development. Yet there is no matching effort to cut migration from rural to urban areas. Some regional planning is indirectly happening in the disguise of `Rural Development’, through various schemes of the Government, viz., Pradhan Mantri Gramin Sadak Yojna, Mahatma Gandhi NREGS, etc. But these are isolated efforts at the `settlement’ level rather than a comprehensively planned effort at a spatial level. The consequences of these efforts in evolution of a `urban’ settlement pattern and therefore the spatial urbanisation seems to be no one’s concern. Though we should be talking about sustainable employment, the various employment programmes generate daily wage jobs for limited number of days. This does not ensure that people stay in villages .

Some beginning was made with the conceptualization of PURA (Provision of Urban Amenities in Rural Areas), a dream project of the former President, Dr. A. P. J. Abdul Kalam, where he advocated for the development of `clusters of villages’ linking them through a loop of 30-40 km and providing them physical, electronic and knowledge connectivity. Even this effort was subsequently dumped by the Government.

Ironically, we do have separate ministries of Urban Development and Rural Development respectively, both catering to the planning and development needs of various `settlements’. Unfortunately, there is huge gap in terms of a Ministry of Regional (Planning and) Development both at the Centre as well as states. Geo-spatial planning at a regional scale, as a result, takes a back seat.

As is the case for regional planning in general, there is hardly an organisation to plan and oversee the growth and development of `metropolitan regions’ at the national level spatially. `Urban planning is a State subject’, is the often used excuse to pass the buck to the State Governments, whereas most of these metro-regions have inter-state and/ or the National ramifications as in the case of the Central National Capital Region (CNCR), Puducherry Region or the Chandigarh Region. It is high time that besides creating a Ministry of Regional (Planning and) Development, the metropolitan city and region planning should be accorded a `Central Subject’ status.

A General Lack of Geo-Spatial Approach

Probably the first ever visible use of the Geo-Spatial technologies, in India, was made during the famous general elections to the Lok Sabha in 1984. GIS tool `PollMap’ was extensively used to relate some key spatial indicators into predicting the number of Lok Sabha seats that the Indian National Congress was likely to win. This was by far the most accurate prediction of election results in India. The GIS expert behind this application , Dr Manoshi Lahiri, was recently honored with the Life Time Achievement Award , yet, when it comes to use of the technology for various formal tasks of the Government, the same Geo-spatial approach seems to be lacking. The recent exercise in delimitating the constituencies for the National and various State and local level elections did not use such technologies and the process is generally not backed by logic. The demand for creation of a separate state of Telangana and a chain of demands for the creation of other smaller states also seem to have their roots in political calculations. Use of Geo-spatial technologies into analyzing the various spatial indicators apart from the original criterion of he language, could make the exercise more logical and convincing.

Locating and developing SEZs is closely related to the process of urbanisation. However, in this case also, the approval and establishment of the SEZs is on a case to case basis by the respective State or the Central Government. There has been hardly any attempt to plan for a proper distribution of the same at the National or State scale. A cursory look at the locations of SEZs (approved as well as in various stages of approval; Map 2) suggests large areas of gap in their spatial location. Clearly, there are concentrations of the SEZs and voids, across the States. An opportunity to coordinate their locations with that of large and metropolitan cities was not utilised. 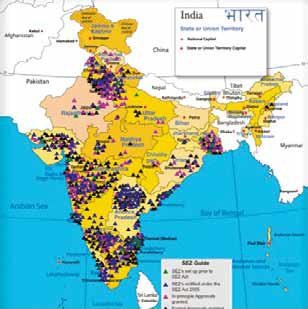 Scope of Master Plans (or Development Plans) generally confines to broad proposals for allocating the use of land for various purposes such as residential, industrial, commercial, recreational, public and semi-public, etc. The various Master Plans (including Development Plans) prepared in the country dwell upon this premise and are essentially supported with an existing Land Use Map and one for target period, along with other related maps. The entire Plan (document) relates spatially to the various proposals under the Plan. The recent Gazette, notifying the Master Plan for Delhi – 2021 , although making detailed proposals on various aspects, lacked a formally notified `Land Use Plan (map)’, not only raising questions about its legal and professional sanctity, but also raising questions about geo-spatial considerations. Surprisingly, it also fails to provide an area-wise break-up of land under various proposed land uses.

Although there are a few examples in `geo-spatial’ approach to Master Planning in the country, these are largely confined to `mapping’. The Master Plan for Delhi – 2021 states , “Mapping of the NCT of Delhi would be done using remote sensing and GIS tools and will also be updated from time to time to have valuable data as regards ground situation …”. We need to graduate from merely `mapping’ to a comprehensive geo-spatial analysis and solutions.

National capital Region (NCR) of Delhi is one of the largest metropolitan regions of the country, spreading across four states. The NCR Plan – 2021 envisages preparation of sub-regional plans, at the level of each state, to ensure a proper distribution of settlements, apart from other details. Delhi, however, has chosen not to prepare such a sub-regional plan, showing a disregard to a geo-spatial approach. At the NCR regional level too, a point based settlement pattern has been proposed where the largest urban settlement (i.e., Delhi) has not been differentiated from the smallest. Introduction of the concept of Central NCR (CNCR) was a right step in the direction of a geo-spatial approach. Unfortunately, this opportunity has also not been exploited in the absence of any plan for the CNCR, which could have also worked as a sub-regional plan. Similarly, no effort has been made to ensure a shift form a `point base approach’ to large `Continuously Built-up Areas’ approach while dealing with settlement patterns as well as while dealing with large built masses spreading beyond administrative boundaries.

Among various other targeted achievements, it is expected that the implementation of the Scheme will result in planning and management of urban settlements based on updated and scientific database supported as decision support system, employing modern planning methods using Geographic Information System (GIS) technology. 168 towns and cities of the various sizes were selected under the Scheme.

Simultaneous to the NUIS, the Government of India initiated Jawaharlal Nehru National Urban Renewal Mission (JnNURM), with objectives to include planned development of identified cities including peri-urban areas, outgrowths and urban corridors leading to dispersed urbanization. 65 towns and cities were selected under the Mission.

Though both the NUIS and the JnNURM aim at planned development of towns and cities of all sizes, the schemes remain largely in isolation to each other, from conception to detailing. The scale and size of the two schemes vary grossly. The coverage, both in terms of population covered and the spatial distribution of towns and cities is with apparent disregards to each other. Both the JnNURM and the NUIS have their independent criteria for selection of towns and cities. When translated into the objectives of the two schemes, it means that only 23 of these cities will have benefit of a planned overall development with the use of modern data sources such as satellite and aerial platforms to generate a comprehensive 3-tier GIS database, as well as focused attention to integrated development of infrastructure services. While for these cities the two schemes become complementary to each other, the remaining 210 cities would gain from only one of the two schemes.