A geo-spatial approach to urban development

Spatial distribution of the selected urban settlements seems to have been overlooked in both the schemes (see Map 3 ). While there are clusters of JnNURM cities, there are large regions without any JnNURM identified city. Similarly, while the NUIS cities are relatively uniformly distributed, there are regions devoid of NUIS cities (e.g., most of the Central and North-western India). At the same time, there are clusters of cities covered by both the NUIS and JnNURM. Criteria for selection of towns and cities, under both the schemes do not have any criterion for their geographic location in a state or a region. There are also cities, close to each other, yet covered by one of the two schemes separately. Non- synchronization of the selection of cities also means that while all of them would have a City Development Plan (CDP) prepared under the JnNURM, they may not necessarily have a Master Plan in place.

The JnNURM also raises a pertinent question about the need of a new (planning) document when a Master Plan/ Development Plan may be already in place. The name `City Development Plan’ itself is misleading to the general public and the legislator as well as the administrators. Many may take it a synonym to a Master Plan, which is a statutory document having gone through the process of `public opinions and objections’ and backing of 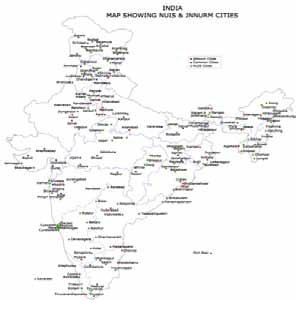 the relevant Act of the State Government. CDP, on the other hand, is more of a guideline and may not stand in a Court of Law. A CDP also does not find place in the recommended planning system detailed out in the UDPFI Guidelines and also not in force by the Institute of Town Planners, India (ITPI) . There is no formally specified plan period for a CDP. However, a cursory look at many of the CDPs prepared indicates it to be about 5 years, i.e. 2006-11, whereas the plan period for a traditional Master Plan is usually 20-25 years. Above all, as stated earlier, a traditional Master Plan essentially follows a geo-spatial approach to planning. The JnNURM is seemingly altering this position to a `non geo-spatial’ approach, hence exposing a lack of `geo-spatial’ vision to planned urban development.

And there is now talk of undertaking `GIS Mapping ’ of the slums and squatter settlements under the newly launched Rajiv Awas Yojana (RAY), to make it look `geo-spatial’ and thus achieve the objective of `Slum Free Cities’.

There has been a general tendency of non `geo-spatial’ approach to urban planning in India, be it at the National or at the lowest level of hierarchy. No concentrated attempts are in place to plan or recommend an urban settlement pattern in the country, spatially. Urban development, by Constitution, is a state subject. As a result, planning for metropolitan cities and their regions also remains a `local’ initiative, though having national ramifications. Absence of a Ministry of Regional (Planning and) Development further contributes to a `non geo-spatial’ vision at the National level.

Location of SEZs in the country (or in States) also does not reflect any geo-spatial approach. Though not directly related to urban development, the current debate on creation of smaller states had a potential to be resolved with geo-spatial technologies. Besides, a general tendency to bypass the time tested approach of Master Planning, which is essentially geo-spatial in nature, is emerging in the form of Master Plans without the supporting Land Use Plans (e.g., in case of Delhi) or in the form of CDPs, which is not only non geo-spatial, but also non-professional. The scheme of NUIS started with good intentions (towards geo-spatial approach) but was overwhelmed by its `flagship’ cousin, the JnNURM.

A geo-spatial approach for urban planning and development in India would include, establishment of a Ministry for Regional (Planning and) Development at the Centre, bringing `Metropolitan Planning including the Metropolitan Region Planning’ under the Central ambit, initiation of another Commission on Urbanisation, better synchronisation between the NUIS and the JnNURM and bringing the CDPs prepared under the JnNURM into the planning framework suggested by the UDPFI Guidelines.

Also, planning for urban settlements has to graduate from a cosmetic `GIS Mapping’ approach to a comprehensive geo-spatial analysis and solution approach. The newly launched Rajiv Awas Yojana and the likely setting up of a National GIS should provide the opportunity for ensuring a geo-spatial approach to urban planning and development. There is no dearth of technology and humanware, there is only a need for a strong geo-spatial vision and approach at all levels of urban planning and development.

Map 2 Locations of SEZs in India

* Ministry of Housing and Urban Poverty Alleviation (2010); Guidelines for GIS Mapping, MIS Development and Integration of GIS with MIS, Unpublished * Report of the Sub-Committee 1 on Rajiv Awas Yojana, Government of India, New Delhi.