Did you pack in the camera? Where’s my toothbrush? Hey, don’t forget the blanket! These are just some of the words of excitement that seem to flow around Civil Engineering students at IIT Kanpur as their 5th semester nears an end. It’s time for the Nainital Survey Camp to start. It is ironical that people think you are going for a vacation, while this is actually classified as a proper course with credit based weightage and is thus mandatory without attaching any of the holiday related ideas to it.

The place of stay, a very calm and peaceful Aurobindo Ashram, is one not to be forgotten. You soon realize that the beauty of the place is in its calm and not in its isolation from the city, in its view from the top and not its cold weather, in its ability to bring friends together and not the dormitories full with students, in its simple and delicious food and not in its frugality.

The surveying part of the camp lasted for around 10 days forming a major portion. We conducted vari-ous GIS related tasks in and around the Aurobindo Ashram. All of the ground based surveying was linked with GPS data and represented in Global coordinates. We used various modern GIS equipment and technologies for our work such as the following:

Our tasks were made much easier by the constant support and encouragement from our Instructor Dr. Bharat Lohani. Also supporting our endeavour was the Lab Staff consisting of Mr Ram Kewal Maurya and Mr Shitla Tripathi.

The entire batch of students was divided into 11 groups of around 7 students each. Each group had to perform the same tasks. Besides the reconnaissance sketches, the groups also worked on time allocation and group management for each task to ensure that the heavy work finished on time.

Topographic mapping includes exact and to-scale reproduction of the salient features of an area on a map. The survey was conducted using Trimble 3600DR and 5600DR200 Total Stations (see Figure 3). 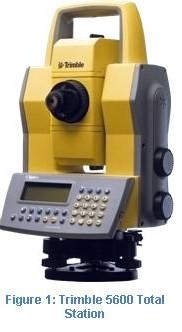 They have accuracies in the order of 2mm for distances and 2” for angles which means that they are very accurate devices that combine the best power of Theodolites and EDMIs (Electronic Distance Measuring Instruments). The challenging terrain of the place required a very thorough renaissance. Control route, rough sketches and various design calculations were done to develop and efficient survey strategy which minimized errors and effort while improving the quality of the work (see Figure 1) 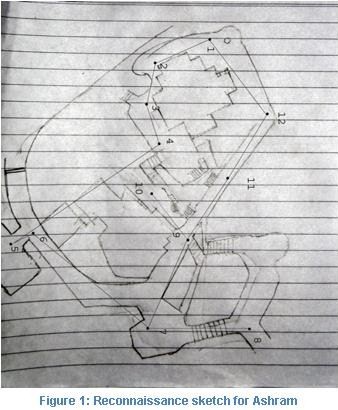 During the survey, the total station was kept on all the pre-decided control points and through that more than a thousand topographic points were observed pertaining to various features like:

Due to the significant elevation differences across the map area, contour development was a very im-portant task, hundreds of spot elevation points were taken for this purpose. At the same time, GPS read-ings from 4-6 control points in the closed traverse were taken using very advanced Trimble R3 GPS re-ceivers with high accuracies of up to 5mm (see Figure 2). 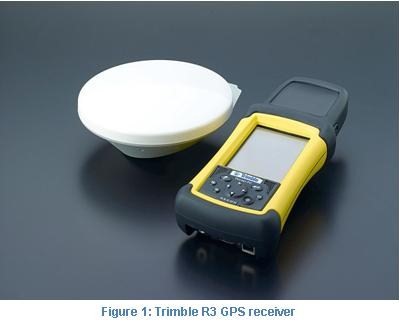 These were adjusted and corrected later with readings from a permanent base station that had been established at the Ashram. The horizontal con-trol traverse was adjusted using the advanced Least-squares method. This gave a huge 1300% improve-ment when compared to the standard Bowditch’s method of adjustment. The map produced can be seen in Figure 4. Notice the similarity with the initial sketch in Figure 1 that was done during reconnais-sance in the initial parts of the survey. A good reconnaissance can really save a lot of time and effort. 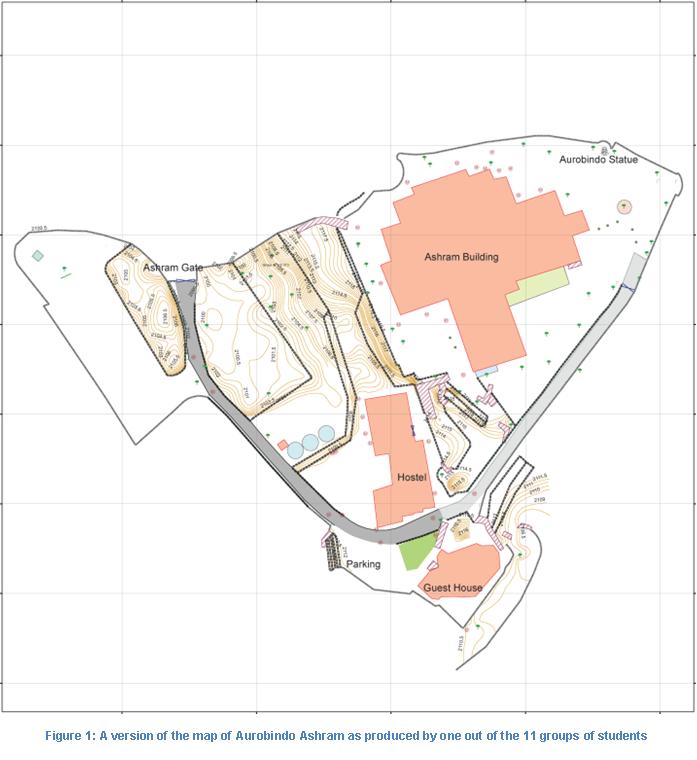 The second task was road profiling of the road from Holy Angels School near the Ashram and leading up to the Ashram gate. Besides the development of a topographic map of the hilly road, we also needed to analyse the slope of the road throughout its length to find patches having a slope greater than 1:10 which then becomes unsafe for vehicles. We also needed to survey the area 3m on either side of the road to account for a road expansion task.

It involved similar techniques as in the Ashram mapping discussed before. The only difference was the type of traverse. The Ashram survey was done with a closed loop traverse; which is self-adjusting. But in the road profiling, we used a link traverse since closing back in at the origin would have meant traversing he road twice – which is inefficient.
Once the map was done, we also laid out a plan for a future widening of the road and suggested a strategy for efficient cutting and filling in some parts of the road. The constant traffic on the road made the task very challenging and required proper planning.

A Real-time kinetic (RTK) survey was conducted of two major routes of Nainital city. These routes were strategically important for tourism and commerce. Equipped with a map marking out the route, a Leica GS5 GPS receiver and an HP iPAQ loaded with ArcPad, each group marched out into the city. The main objective was to mark the road/route/paths and the various shops, hotels, mobile recharge spots, bus stands, travel agencies, food outlets, tourist spots, public services, ATMs etc. with an objective of these being vital to a person travelling in the city – especially a tourist. The objective was to make a tourist friendly map which could be integrated with a Web-GIS based solution to provide internet based navigational services and focus more on mobile platform.

To sum it all, I can only say that it was an experience of a lifetime. The opportunity to study out in the open in such an atmosphere was something which is incomparable to any classroom teaching. The ex-posure and experience of field work was tremendous and it definitely boosted our confidence and helped us learn from such a different perspective.
Students said they felt like real Civil Engineers perhaps for the first time in their life. Some even said that the camp was designed very carefully keeping in mind the enjoyment needs of a student – allowing him to wind back, relax and prepare himself for the tougher years to come. Many students also added that this camp helped them realise their inner self and made them clearer about their future.

The interaction amongst friends was at its prime, with everybody in the department getting to know about each other. Plus the brilliant weather and the beautiful scenery made it even more memorable. These are the days which we shall be cherishing for many-many years to come.