Nowadays, a growing number of GNSS users demand highly-accurate positioning with minimal latency. PPP is a new positioning technique providing centimeter-level error. Precise Point Positioning (PPP) processes measurements from a single user receiver, using detailed physical models and corrections, and precise GNSS orbit and clock products computed beforehand. PPP differs from other precise-positioning approaches like Real Time Kinematic (RTK) in that no reference stations are needed in the vicinity of the user. Another advantage is that since the GNSS orbit and clock products are by nature global, the PPP solutions are also global. However, it should be noted that it is possible to set up a regional PPP service using a regional network of stations.

A PPP solution requires some time to converge due to the need for properly estimating phase ambiguities, but the use of combined GLONASS and GPS measurements leads to significantly better results when the observation time is short. For the GNSS user, this means that up to 18 GPS+GLONASS satellites can be simultaneously visible in open-sky areas, which represents an increase of around 60% in satellite availability compared to the GPS-only scenario. This will lead to higher accuracy and faster convergence in precise positioning applications.

A further improvement will be obtained in the near future thanks to the deployment of new regional systems in geosynchronous orbits. With these systems, the convergence time or the accuracy on a short observation time would remain unaffected, but the accuracy on applications that can afford a long observation time will be significantly improved. To achieve this, it is important to be able to compute accurate geosynchronous orbits; this is currently a challenge, but appears to be feasible in the near future.

The PPP algorithm uses as input code and phase observations from a dual-frequency receiver, and precise satellite orbits and clocks, in order to calculate precise receiver coordinates and clock. The observations coming from all the satellites are processed together in a filter that solves for the different unknowns, namely the receiver coordinates, the receiver clock, the zenith tropospheric delay and the phase ambiguities.

Given that PPP is not a differential technique, it cannot resolve carrier phase ambiguities and they need to be estimated with the aid of the code measurements. This fact makes the convergence period longer than in other techniques (RTK, for instance). The generation of precise satellite orbits and clocks in real time becomes a major challenge for enabling a real time positioning service. GMV has developed an infrastructure for the generation of highly precise GPS, GLONASS and Galileo orbits and clocks in real time.

magicGNSS is a web-based suite of GNSS algorithms and products developed by GMV are available at magicgnss.gmv.com. It includes a state of the art PPP module, able to compute precise positioning for static and dynamic users in real time. In addition to the web application, an e-mail based PPP service is also provided. 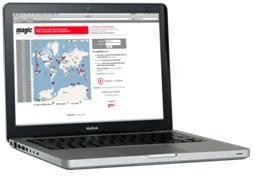 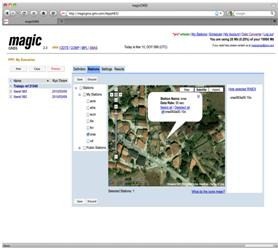 The accuracy of the PPP solution (vs. IGS) is around 1 cm, both for GPS and GPS+GLONASS, for 1-day-long observation times. 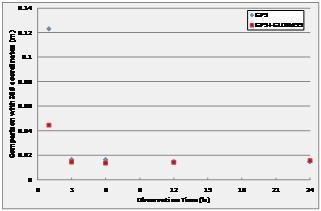 These performances present multi-system PPP as an interesting option for precise positioning, since sub-dm accuracy can be reached with one hour observation time. The latency with which the solution can be obtained depends only on the latency of the reference products. Real-time generation of products implies that the solution is available immediately after the collection of the measurements.

The main application of real-time PPP, however, is kinematic positioning. In order to evaluate the performances, a receiver was installed on the roof of a van, and data were recorded during a 30-min drive in the countryside near GMV premises, illustrated in Fig. 3.

GPS data were then processed off-line with the new kinematic PPP and compared with a reference trajectory. This reference path was calculated with RTK, using a reference station installed a few km away. The difference between the solutions versus time is shown in Fig. 4. 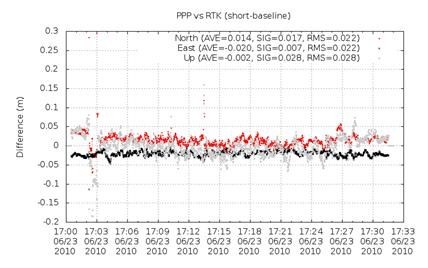