Could you briefl y explain the mandate of USTDA?

USTDA’s reverse trade missions (RTM) are the mainstay of its International Business Partnership Program (IBPP). Created in 2010 in response to the Obama Administration’s National Export Initiative, the IBPP is USTDA’s signature program for linking the U.S. private sector to foreign buyers with upcoming procurement plans. These visits are carefully planned to enable foreign decision-makers the ability to observe the manufacture, demonstration and operation of U.S. goods and services that can help them achieve their development goals.

The United States and India have been collaborating closely in the civil aviation space for almost 6 years with the signing of the landmark bilateral Open Skies Agreement in mid-2005. As you may already know, collaboration in the area of satellite navigation has been identifi ed as one of the important tools for enhancing the US-India bilateral relationship which in turn is an important pillar of the Strategic Dialogue. Since the signing of the Open Skies Agreement the two countries are now closely collaborating in the area of civil aviation and satellite based navigation. Through collaborative efforts, our two countries are promoting compatibility and inter-operability between the U.S. Global Positioning System, India’s navigation systems, and those of other countries. The goal is obviously to ensure safer skies and effi cient air traffi c management which will help lower costs and increase bilateral trade between our countries.

The hallmark of USTDA development assistance has always involved building partnerships between U.S. companies and overseas project sponsors to bring proven
private sector solutions to developmental challenges. Would you like to explain this in the context of MoU signed between USTDA and Airports Authority of India (AAI) on GAGAN?

In 2008, USTDA sponsored a reverse trade mission consisting of technical personnel from the Directorate General of Civil Aviation (DGCA), the Airports Authority of India (AAI), and the Indian Space Research Organization (ISRO) to travel to the United States to assist in developing a plan to certify GNSS technologies for use in the development of India’s GPS and Geo-Augmented Navigation System (GAGAN) project. The reverse trade mission promoted increased cooperation between U.S. and Indian aviation offi cials with regards to the implementation of a satellite-based augmentation system (SBAS) in India and familiarized Indian offi cials with U.S. aviation technologies, approaches, and standards. As a result of this visit, Raytheon secured a contract for$60 million in exports of U.S.- manufactured goods and services that was awarded by ISRO in July 2009. USTDA did not sign a grant agreement with the Airports Authority of India for GAGAN, rather we sponsored a reverse trade mission to allow offi cials to see the technologies in action.

According to the agreement USTDA will provide $407,325 to support the AAI’s efforts to install and commission a pilot Ground Based Augmentation System (GBAS). Would USTDA also facilitate technical knowhow to this program?

Recently, USTDA provided a grant ($407,325) to the Airports Authority of India (AAI) to assist in the installation, certifi cation, and operational commissioning of a Ground Based Augmentation System (GBAS) at Chennai airport. At the request of AAI, the USTDA assistance will fund the demonstration of a Honeywell’s GBAS SmartPath system pilot at the Chennai airport, a system that is already certifi ed with the Federal Aviation Administration. By gaining its operational service approval in India, the SmartPath system will help AAI achieve greater fuel effi ciency and cost savings for air carriers, as well as safety and effi ciency/capacity improvements for its many airports. Under the grant agreement, the technical assistance will support training of AAI and DGCA personnel for the installation, operational commissioning, and certifi cation of Honeywell’s GBAS and associated GPS Landing System (GLS) procedures at Chennai airport. Honeywell and FAA personnel, with the support of USTDA funds, will facilitate technical training on the GBAS technology.

Could you highlight few key initiatives supported by USTDA pertaining to GPS in the South and SE Asian region?

In addition to the Indian GAGAN and GBAS projects, USTDA has supported a number of technical symposia related to GPS technology innovations for aviation in the broader South and SE Asia region. This has included sponsoring the APEC Aviation Navigation Technologies Workshops I and II, in 2005 and 2009, in cooperation with aviation partners in SE Asia and the U.S. FAA. 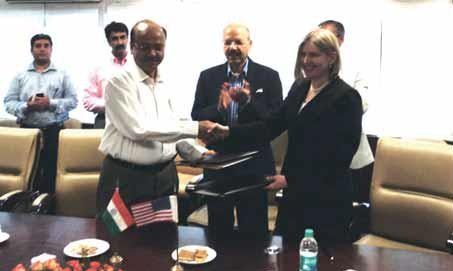 The first of these addressed RNAV/RNP aviation navigation technologies, and aimed to familiarize SE Asian aviation authorities with the technical capacities needed to implement and authorize these performanceenhancing navigational systems. The symposium focused on topics ranging from fl ight standards, aircraft certifi cation, air traffi c operational approvals, and the procedural implementation of RNAV/ RNP systems. The second workshop, held in Bangkok Thailand, addressed the operational approvals of technologies such as Performance Based Navigation (PBN) procedures, as well as the implementation of other Global Navigation Satellite Systems (GNSS) approaches. This second workshop brought U.S. representatives together with aviation offi cials from numerous APEC economies and India to discuss the role of institutional, operational, and regulatory procedures needed to promote aviation modernization and a range of technologies related to the next generation air traffi c system, also known as NextGen. Most recently, in August 2010 USTDA sponsored the Asia-Pacifi c Commercial Aviation Access workshop and reverse trade mission for approximately 40 senior aviation offi cials representing civil aviation agencies (CAAs) and airlines from Bangladesh, India, Indonesia, Malaysia, Mongolia, the Philippines, Thailand, and Vietnam, in the San Francisco, CA and Seattle, WA areas. This initiative provided a comprehensive overview of the safety and security requirements needed to gain access to U.S. airspace, and also addressed opportunities presented to airlines and CAAs from adoption of growing GPS-related safety and navigational technologies.