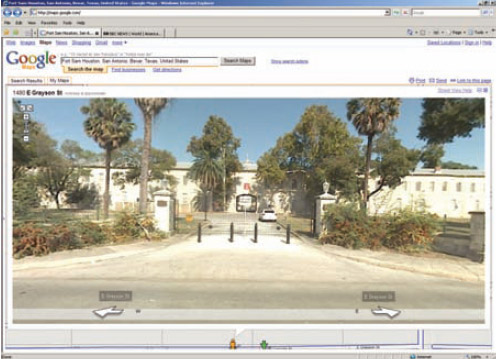 The Pentagon has banned Google from taking photographs and video footage of US military bases after images showing important security features of a base in Texas appeared on the company’s website. The Defence Department’s ultimatum came after images showing entry gates, barriers and buildings within the Fort Sam Houstan base, in Texas, were posted on a section of Google’s site which offers panoramic street views of different locations.

Google later said its decision to request access to the base – which had been approved – was a mistake.

In a letter to all Defence Department bases and installations in the US, the Pentagon said that providing 360-degree views of defence facilities could offer sensitive information to potential adversaries and in turn endanger staff.

Air Force Gen. Gene Renuart, chief of the US Northern Command, wrote that in this case the photographs – which were taken by a camera mounted on a vehicle dispatched by Google – showed “where all the guards are, how the barriers go up and down, and how to get in and out of buildings. I think that poses a real security risk to our military installations,” he wrote.

It was not clear from the letter why Google had been given permission to get inside and photograph the base.

In a statement, a Google spokesperson said: “It is against our policy to request access to military installation for the purpose of capturing imagery in Street View.” Once contacted by the military, Google quickly took the images down, the spokesperson added.

General Renuart said that after it had been given access to the base, Google took “panoramic images of the area with roof-mounted recording equipment. These images were placed on the internet for public access.”

He said that the ban was not intended as an attack on the search firm, but indicated the military’s concern about the secondary effects of an otherwise useful technology.

“Google was very appreciative of us letting them know that we had a concern,” he said. “They understand the security implications, and they have given us no indication that they would not be helpful to us if we asked.”

Street View is an addition to Google’s already popular maps service, which allows visitors to click on a location and see a 360-degree view of the spot. The feature has raised concerns about privacy after people have been pictured – their faces clearly visible – being arrested, sunbathing, and urinating in public.

So far streets and other locations in about 30 major American cities, including Chicago, Los Angeles, New York and San Francisco, have been photographed. Google has not said whether it intends to expand the feature to the UK.

The Pentagon’s letter comes just days after it was reported that protesters used satellite imagery from Google Earth to gain access to the roof of the Houses of Parliament in London.http:// technology.timesonline.co.uk/tol/news/ tech_and_web/article3503624.ece