The Implementation a Simulation Platform for INS/GNSS Integrated Systems

Some numerical examples are given in this section to illustrate the applicability and capability of proposed simulation platform. All the simulation scenarios are conducted with the specification of a tactical grade IMU with 0.0001g accelerometer bias and 0.75 deg/hr gyro drift.

Assume that DGPS measurements is undertaking so that the standard deviation of position solutions from GNSS are considered 0.5m. Besides, 4 periods of GNSS outage (no visible satellite) which last 60 seconds are designed to verify the performance of the optimal estimation engine. The RTS smoother is implemented in both Loosely-Coupled and Tightly-coupled architectures, respectively. The trajectory is generated by the trajectory generator. The maximum speed in straight line is about 60 km/hr. Simulation time last 24.7 minutes. All the navigation solutions are compared to “true” data to verify the performance of the estimation algorithms

Theoretically, the optimal Q and R matrices can guarantee the optimal estimation; however, it is not easy to obtain such information. In fact, tuning optimal Q and R matrices can be time consuming and it requires strong experience and background in both systems. Consequently, the requirement of human interference for Q/R tuning is very high. In other words, the tuning process can be regarded as a special form of learning process as it is usually done by experienced people and it needs a period of time to obtain the optimal solution that might not even exist. The requirement of prior knowledge is not a burden; however, how to obtain correct and useful knowledge is, for example, tuning optimal Q and R matrices for Kalman filter processing is time consuming and frustrating unless it is done by experts.

This simulator provides an easy way to understanding the behavior while tuning the matrix. Figures 15 and 16 illustrate the results with well-tuned and improper Q matrices, respectively. 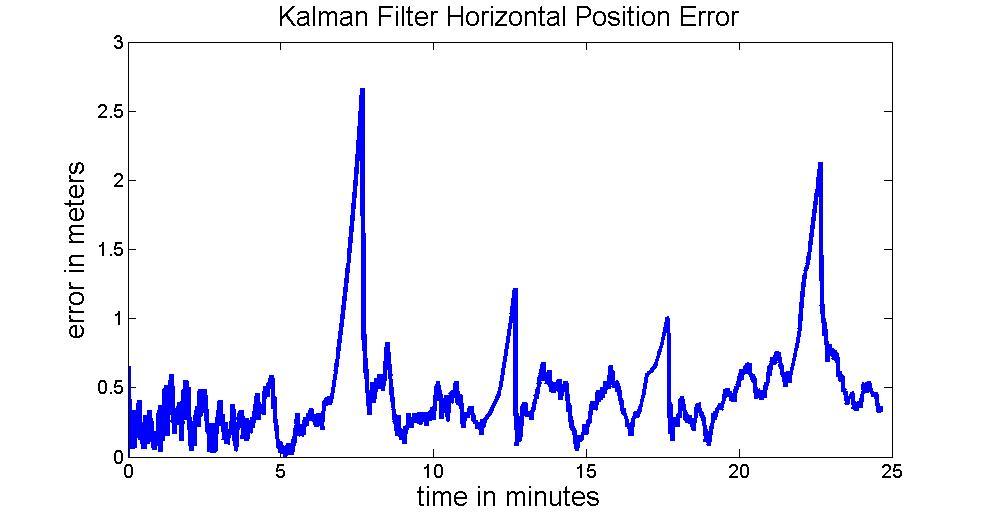 The need to re-design algorithms based on the Kalman filter (i.e., states) to operate adequately and efficiently on every new platform (application) or different systems (i.e., switch from navigation grade IMU to tactical grade IMUs) can be very costly. In addition, the Q and R matrices tuning is heavily system dependent. For example, it is impossible to use the sets of parameters that are designated for navigation grade IMU for the estimation utilizing tactical grade IMUs. By using the proposed simulation platform, user can appreciate the filter tuning process using various “pseudo” IMUs with different accuracies. In this case, it can be used as a tool to train people how to tune the Q matrix theoretically according to the grade of IMU selected without actually getting a pricy IMU and conducting time consuming filed tests. 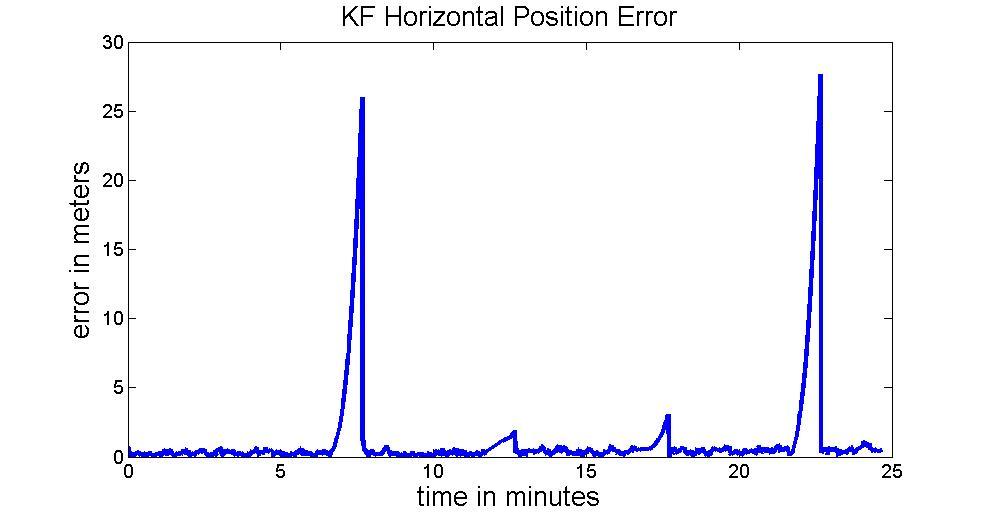 The comparison between loosely coupled EKF and RTS

Figure 17 illustrates the results of the commonest INS/GNSS integrated architecture. The RMS of positional errors is 0.4013m. No GNSS outage is simulated in this case. 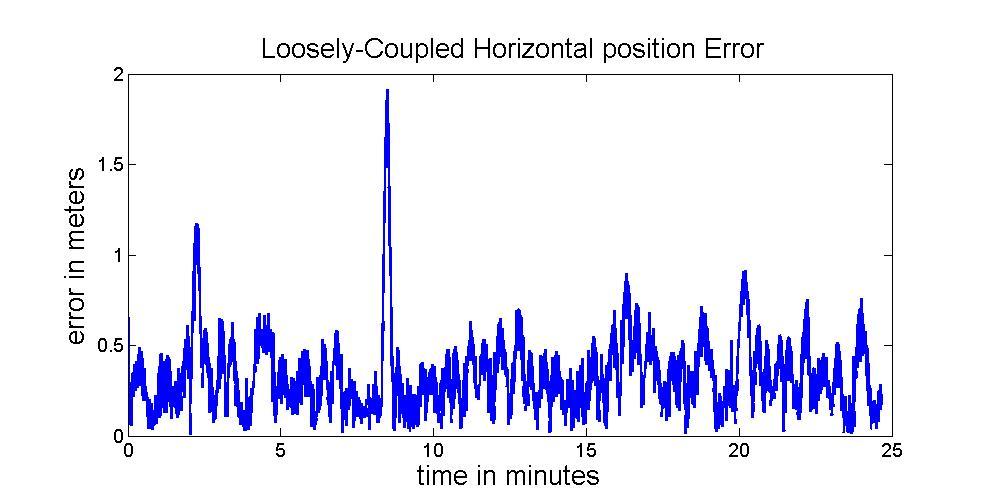 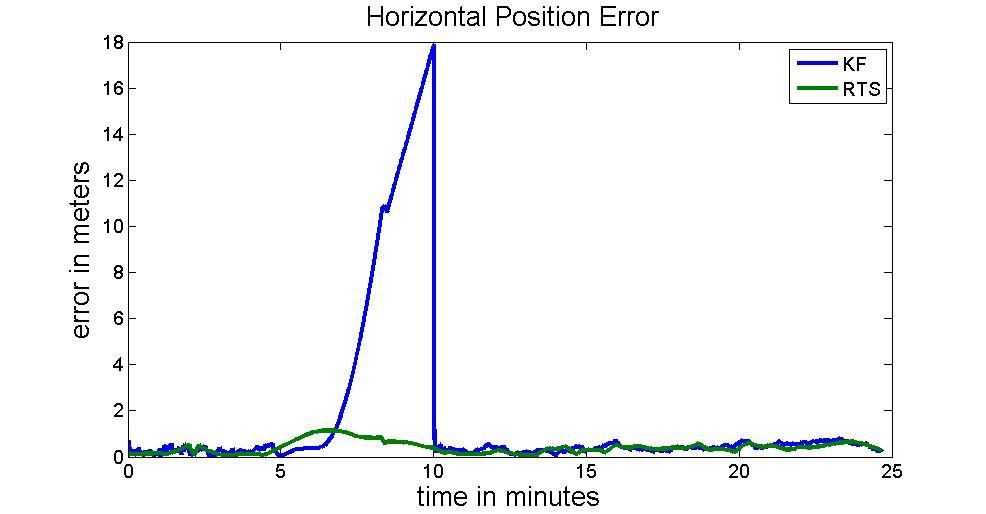 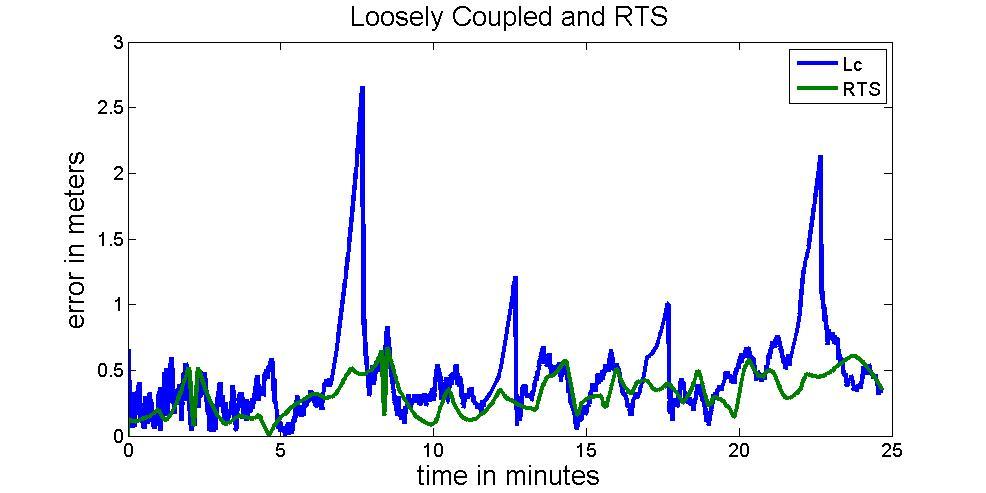 The comparison between tightly coupled EKF and RTS 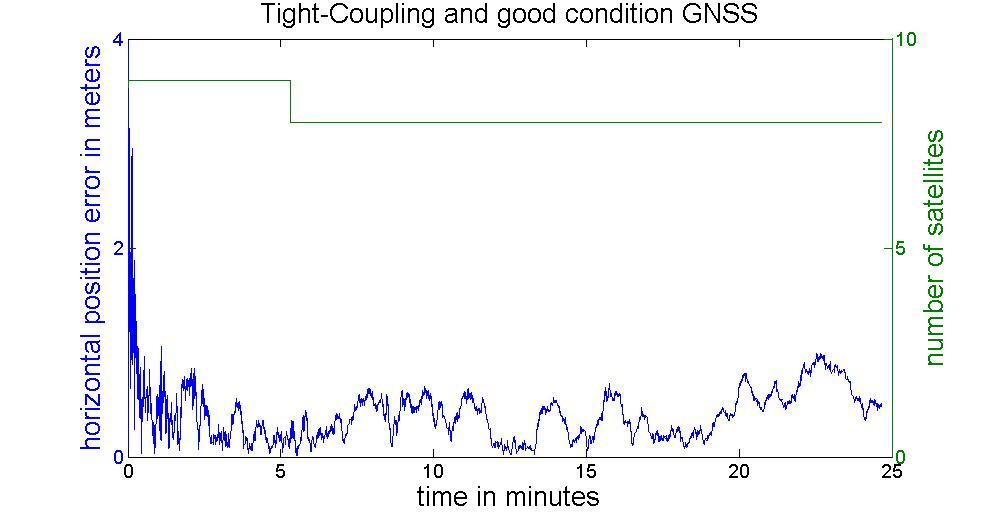 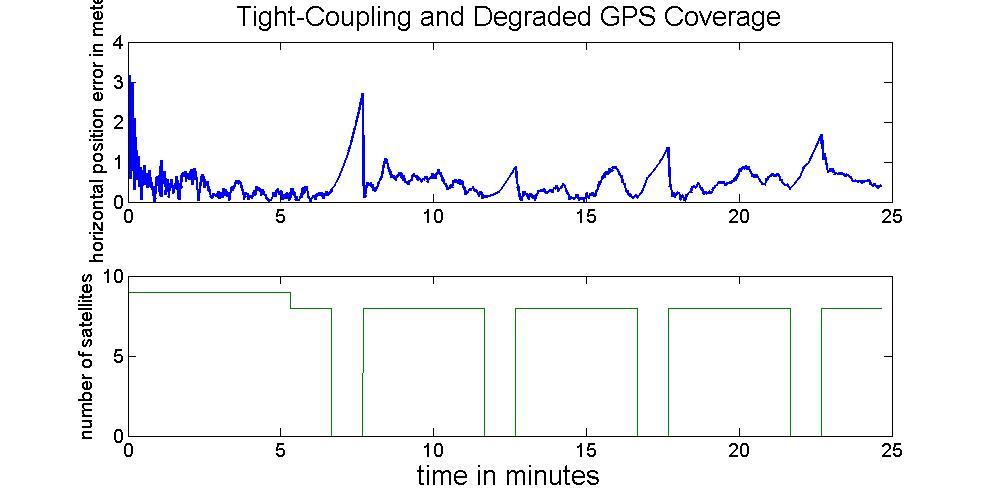 Figure 23 compares the performance using EKF and RTS smoother, respectively. The RMS values of positional error after applying RTS smoother is given in Table 3. 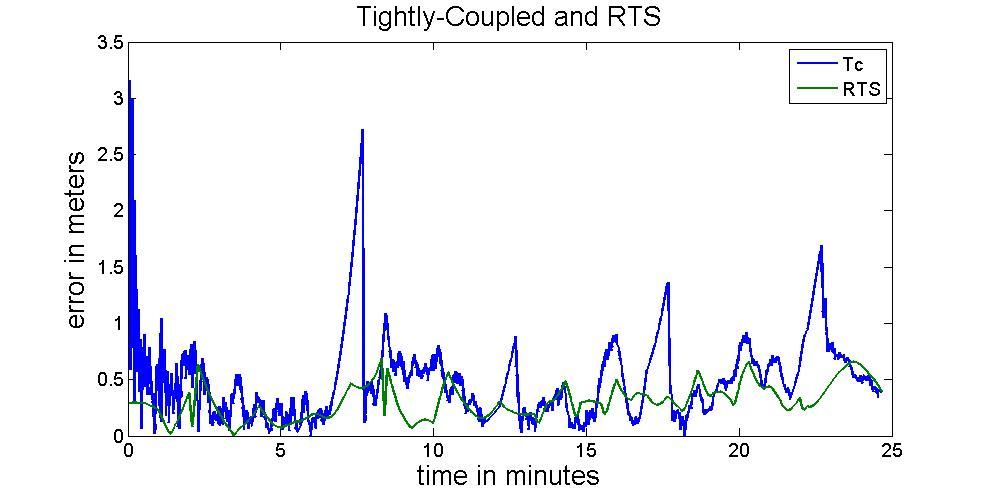 The comparison between loosely coupled and tightly coupled EKF 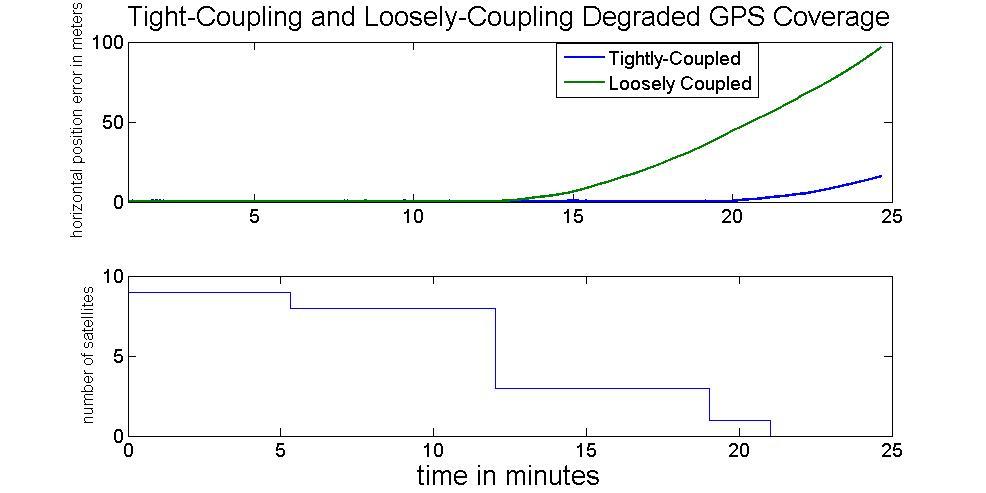 Figure 25 illustrates a conceptual plot concerning the impact of the RTS smoother on the positioning error in case of a GPS outage. As illustrated in Figure 25, the use of RTS smoother is able to remove the residual errors of KF significantly; however, some residual errors still remain. It can be seen that the proposed INS/GNSS simulation platform can not only emulate measurements for advanced algorithms research but provide optimal estimation engine for investigating some practical issues concerning the development of INS/GNSS integration algorithm. Therefore, it is a cost effective tool not only for research but for education as well. It becomes easier in studying INS/GNSS integration algorithm and Kalman Filter arguments tuning through the simulator. Without experience hardware, it totally composes of software thus the system becomes more fixable. 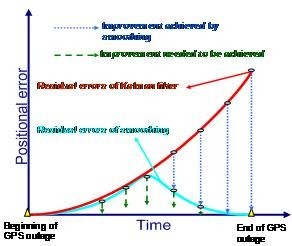 Figure 25: The impact of RTS smoother on positional error during outage

This study exploits a complete INS/GNSS simulation platform. Its architecture includes trajectory generator which can generate all kind of trajectory by user defined. Measurement generator created IMU and GNSS measurements according to the user designed path data and senor error model. Estimator has two different data process strategy, feedforward which suit for high grade IMU and feedback for tactical grade or MEMS IMU. Besides, The EKF and RTS smoother are implemented by loosely coupled and tightly coupled integration architecture.

It will become easier in studying INS/GNSS integration algorithm and Kalman Filter arguments tuning through the simulator. Without expensive hardware, it totally composes of software thus the system becomes more fixable. Not only in study but also the result of simulation also can be the principle of IMU purchase. User can easy create a varied environment where desired IMU is expected to work. Then through simulation, the adaptive IMU can be selected. In the future, not only in the high demand of accuracy in mapping or low-cost navigation for personal use, this simulator can provide precise simulation as possible. To reach all kind of demands, the estimation process engine is implemented to process real measurement as well.

The authors would like to acknowledge the financial support by the National Science Council of the Executive Yuan, ROC (Taiwan) (NSC 95-2221-E-006 -335 -MY2).