Global Navigation Satellite Systems (GNSS) have become increasingly interwoven into the fabric of our infrastructure and economic system. However, as the services provided by GNSS become more important for safety of life and economically critical infrastructure, subversive elements will be increasingly tempted deny or spoof its signals. Given that GNSS has well-acknowledged vulnerabilities, it is becoming recognized that mitigations and back-ups are necessary [1]. Indeed, we are hopefully moving to a robust, comprehensive approach to position, navigation and timing (PNT) architecture. An element that should be central to the consideration is security. This article uses Loran as a case study for a systematic examination of navigation security. The study of interest as Loran is oft considered as a good complement to GNSS for improving overall PNT security and availability.

Loran, in particular the next generation Enhanced Loran (eLoran), has many properties that make it a good complement to GNSS. It has similar outputs and performance as GNSS. As it is an area navigation (RNAV) system, it can be used to drive the same interfaces as GNSS. eLoran is being developed to provide performance levels that can support non precision approach (NPA), harbor entrance approach (HEA), and stratum 1 frequency and precise timing. At the same time, it is an independent system and has failure modes that differ from GNSS. The attractiveness of Loran as part of a full PNT architecture has been recognized by entities such as the US Department of Homeland Security (DHS) and the General Lighthouse Authority (GLA) of England, Ireland, and Scotland [2][3]. While having a back up implies security through redundancy, the eLoran system can provide even more security to PNT. Its characteristics make many of the attacks significantly more difficult than in GNSS. Its higher power makes it more robust to on-air attacks. The system can carry signal authentication messages to dissuade other attacks. Its dissimilar characteristics makes attacking Loran technically different from attacking GNSS. eLoran, in this context, is extremely attractive as a part of a comprehensive PNT architecture. This article assesses the security of eLoran and discusses how its features can be utilized to provide defenses against likely attacks.

Navigation security is increasingly important for two reasons. The first is the increased adoption and integration of navigation technologies. Navigation security is needed to ensure that the PNT outputs we count on are indeed reliable. The second is the global increase of information technology threats. Secure navigation can serve as a building block for protection of information and assets. These two distinct points can be encapsulated as “security for navigation” and “security from navigation”, respectively.

This article focuses primarily on the “security for navigation” as it is a prerequisite for “security from navigation.” To understand navigation security, it is important to understand the threats and attacks that may be inflicted upon it.

This section discusses attacks and Loran characteristics that may be useful for security. It categorizes the various possible attacks and introduces common defenses. It describes specific Loran features and how they apply to security against attacks. More background on navigation security measures and Loran are available in literature [4][5][6].

Attack models are useful for the assessment of system robustness and are a standard tool used by the security community. In assessing the security of a radio-navigation system, we divide the attacks into two major categories – on-air and off air attacks. On-air attacks are ones where the adversary attempts to compete with or overwhelm the broadcast signal. Off air or direct injection attacks are ones where the adversary directly inputs into the receiver.

On-air attacks can come in several forms. One common category of GNSS attack is jamming. Jamming is the broadcast of RF power that interferes with a receiver’s ability to track the genuine signals resulting in denial of service (DoS). Many incidences of GNSS jamming have been reported. The other major category of on-air attack is broadcast spoofing where a competing signal is transmitted so that the user receiver generates an incorrect position. This threat is real and there have been anecdotal accounts of GNSS spoofing as well as spoofer demonstrations [7][8]. Different spoofing techniques exist. The transmission of simulated signals is one spoofing method. Spoofing techniques can also utilize the genuine broadcast signal. A simple example is relay spoofing or meaconing where the actual broadcast is received at one location and repeated at another. A more sophisticated version is to variably delay the components (signals from different transmitters) of actual broadcast and rebroadcast the signal to generate false ranges (“delay and relay” or selective delay). Another version is to modify the actual broadcast signal. Forms of direct injection attacks are similar to those of on-air spoofing attacks. They typically need a complicit or oblivious user as they require direct access to the receiver. Given this, they are simpler to implement than on-air attacks as the spoofed signals do not need to compete with the broadcast signals. Furthermore, the spoof “broadcast” is simpler to implement compared to its on-air brethren.

Several defenses against these attacks are possible. A physical defense is one possibility. Strong signal broadcasts represent a physical barrier against on-air attacks as the adversary needs to overcome the power of the genuine signal. This is one advantage of Loran. Another way to increase genuine signal power relative to an adversary is to use directional antennas. Another example of a physical barrier is tamper proofing. This may prevent injection attacks if the antenna and receiver represent one tamperproof unit.

A second type of defense comes from signal design and authentication. Some features can be used to deter spoofing or cause on-air spoofing effects to be detectable depending on how it is conducted. One such feature is data authentication where the recipient can verify that the provenance of the information in the signal. Another method is hidden or location dependent marker. The technique provides information that is hidden in the signal that can only be known to the genuine source. The information is later revealed so verification is possible. A related technique is the use of location dependent marker. Another defense is hidden signal, an example of which is the GPS P(Y) code. If adversaries cannot determine the broadcast signal, then they cannot spoof it. Table 1 categorizes these attacks and potential defenses.

There are many features of Loran that are useful in providing security to the signal. Foremost is its signal frequency and power. The Loran is a low frequency (LF) transmitted at a power level of 400 kW or more. At 100 kHz, the signal has a wavelength of three kilometers thus requiring a large antenna to transmit efficiently. Even a quarter wavelength antenna is physically difficult to realize. Thus, the most common Loran antenna in service is a 625 foot (190 m) top loaded monopole (TLM). Antennas as tall as 1350 feet (411.48 m) have been used. The high signal power, necessary to overcome atmospheric noise at long ranges, makes the signal more difficult to jam and spoof. These features make it difficult for adversaries to set up portable, inconspicuous, on-air attacks. Smaller antennas are significantly more inefficient.

eLoran will incorporate a data channel. The data channel utilizes pulse position modulation (PPM) to add data to the nominal Loran pulse. The data channel is designed to provide system information and differential Loran corrections. It can enhance security by providing authentication information to validate the data and source of the signal. A version of the authentication message system has been tested [9]. Furthermore, the data modulation itself can be useful in detecting on-air spoofing as discussed later.

Another difference between Loran and GNSS is that the former shares its frequency using time division multiple access (TDMA) while the later does it using code division multiple access (CDMA). That Loran is a pulsed broadcast also has security implications. This characteristics makes it more susceptible to “delay and relay” spoofing as signals from different stations are easily separated in time.

Jamming a signal involves overcoming the broadcast power of the signal. A general straight forward jamming broadcast is transmission of roughly equal received power at the carrier wave frequency. Due to distance, the received Loran power is significantly less than 400 kW radiated by the transmitter. The power falls off at greater than the nominal square of the distance due to attenuation for propagation along the ground [10]. This can be seen in Figure 1 which uses the nominal groundwave model from [11]. A 400 kW transmitter 300 kilometers away is received with roughly the equivalent power as a 40 W transmitter 5 km away. These are equivalent to a transmitter radiating 4 kW to a user 0.5 km away. The 300 km distance serves as a reasonable value for distance between a user and a close transmitter. 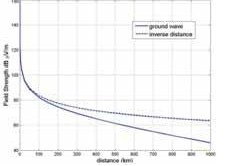 Spoofing a Loran signal by overcoming the transmitted signal is even more challenging than jamming. Part of the difficulty lies transmitting a Loran signal from a short, high Q, antenna. Short, high Q antennas have bandwidths that are much narrower than the signal bandwidth. Thus broadcasting a Loran signal from such antennas is more inefficient than transmitting a pure tone [12]. As a result, spoofing by broadcasting a tonal or near tone signals and affecting the measured time of arrival (TOA) is likely preferred it can be achieved with less power than that needed for jamming.

The ability to radiate the power from a very short antenna is examined. A very short antenna is one whose height is much less than the transmitted wavelength. As the Loran wavelength is 3 km, even a 100 m antenna may be considered very short! Assuming a short monopole antenna on a perfect ground plane is used, the standard radiative resistance is given by Equation 1. If radiative resistance is the sole governing factor, then radiating the power levels in the previous section would only require currents on the order of ten amperes. However the reactance also be considered.

For a very short antenna, the reactance of the antenna is mostly capacitative. Equation 2 gives the reactance of a short monopole antenna where Δz is twice the antenna height (h) and a is the wire radius [13]. A similar result can be gained from empirical derivations. Equation 3 is the capacitance from a vertical wire of length h and diameter d with k being an empirical factor related the height above ground of the low point of the wire [14]. The reactance derived from Equation 3 is seen in Equation 4 and is essentially the same as Equation 2 for wires close to the ground (k ~ .44). 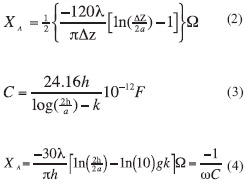 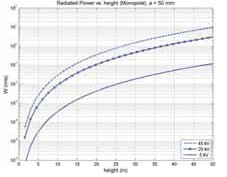 The results have some dependency on antenna radius with the general trend being radiated power increases with antenna diameter. Table 3 shows the antenna height needed to achieve the required radiated powers from the scenarios discussed for three different antenna radii.

The analysis indicates that, unless an attacker is quite close, an on-air attack would require antenna structures that are quite significant – over 15 meters in the most optimistic case at 5 km. At ½ km, the antenna heights are more achievable but they will likely be noticed if they are at that distance to the user.

The analysis applies specifically to very short antennas and it does not consider other factors such as top loading which also improves performance. As antennas get larger, the reactance is lower than suggested by Equation 2 due to inductance. In fact, measurements of an operating Loran antenna show a reactance of -25 Ω, much less than calculated by the equation [12].

The analysis assumptions represent an optimistic case from the attacker’s perspective. It assumes away many losses such as ohmic and matching losses. It assumes no transmitter inefficiencies. It also assumes a perfect ground plane which an attacker is unlikely to approximate due to the amount of preparation needed to set this up.

Spoofing can be detected on modulated Loran pulses especially if its effect is large. Spoofing as described previously, overlays the broadcast Loran signal with a tonal signal which alters the determined time of arrival (TOA). However, this form of attack leaves residuals that can be detected.