The transformation of the old map sheets series of the Greek State remains a recurring issue. The main problem lies in the transformation of the old Greek Datum (GR-Datum), which is mainly used for the mapping of the Greek rural areas. Up to date, there is no official transition procedure connecting the old version of the GR-Datum to the new official Hellenic Geodetic Reference System of 1987 (HGRS1987). As a result, geodesists, surveyors and cartographers are obliged to develop ad hoc techniques.

In the present paper we present a methodology, which is based on the verification of the common points of the two different geodetic systems and the implementation of the well-known 2D similarity transformation. The numerical application took part for the Northern part of Greece (Central and Eastern Macedonia). The consistency of the old version of the GR-Datum and the HGRS1987 is at the level of 1 meter.

After 1917 and especially following the arrival of the Greek refugees from Pontus and Asia Minor (1922), there was a great need for the settlement of the rural population. In this direction, the Surveying Agency of the Ministry of Agriculture (which was established in 1917, from now on SAMA) created numerous Map Distributions (MDs), in order to facilitate the whole procedure (Fotiou and Livieratos 2000). The initial work included classical triangulations and mapping and finally the creation of map sheets mostly in 1:5000 scale (or in 1:1000). The coordinates referred to the old Greek Datum (GRDatum) and particularly its pre-1940 version (Fotiou and Livieratos 2000). The so-called old version of the GR-Datum consists of measurements and computations held before the Second World War. It is referenced to the Bessel 1841 ellipsoid and uses the Hatt projection system (Mugnier 2002). Hatt is an equidistance map projection, which has practical no deformation for limited areas (e.g. not larger than 30-40 km)1. Consequently, its accuracy corresponded to the needs of this particular era and of course to the necessity for the prompt settlement of the population. There are cases where the accuracy is particularly low (e.g. lower than 5 meters), while in some areas the results reach a 15-20 cm accuracy. Figures 1 and 2 depict part of SAMA’s MD for a village near Thessaloniki and Drama regions, respectively.

Unfortunately, to date, there is no officially accepted methodology for the transformation of SAMA’s old map series to the official Hellenic Geodetic Reference System of 19872 (HGRS1987, HEMCO 1987, Takos 1989, Kalamakis et al. 2017).

As a consequence, geodesists, surveyors and cartographers are applying ad-hoc techniques, in order to align the old MP information to their surveying layout3. In this context, we describe a methodology based on the 2D transformation of the coordinates of the State’s benchmarks4 from the old version of GR-Datum to the new one, using common points. We test the methodology to 11 Map Sheets in the Central and East Macedonia regions. 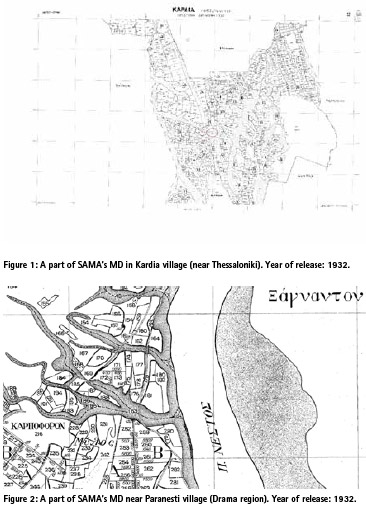 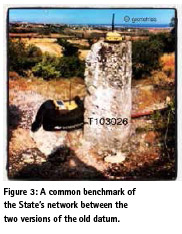 As previously stated, there is no officially released procedure to transform the old version of the GR-Datum to any newer version/datum. On the other hand, for the new version of the GR-Datum, which is practically realised in mid-80s with new measurements and new adjustments (Takos 1989, Fotiou and Livieratos 2000), there is an explicitly defined and publicly released transformation procedure for the transition to the HGRS1987, using second degree polynomials (HEMCO 1995). Figure 3 presents an old benchmark of the State’s network, which is a common point between the two versions of the GR-Datum.

The second degree polynomials refer to map sheets of 1:100000 scale (or for some rare cases to 1:50000)5. Thus, if a connection between the two versions of the GR-Datum can be made, then the old map series can refer to the HGRS1987. This point-wise connection is realized by the implementation of the so-called 2-D similarity transformation6, according to the following equation (Dermanis and Fotiou 1992):

(Davidson 1993). Hence, this approach should be adopted with extra caution.

The aforementioned procedure allows the transformation of the old map series (referring to the old version of the GRDatum) to the HGRS1987. For each examined area the procedure provides the ability to transform any type of information (map sheets, benchmarks, points, layouts) to the HGRS1987 and at the same time, delivers the accuracy of the transformation. This plays an important role to several scientific groups, such as: (a) Surveyors who are occupied with the Cadastral mapping, (b) State’s Agencies, which are looking for reliable transformation for many applications and (c) Cartographers. 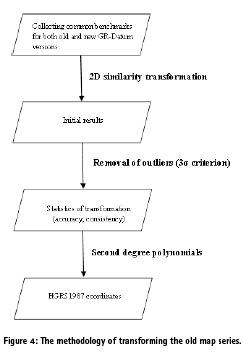 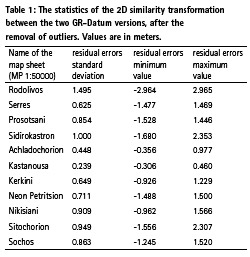 Finally, it should also be underlined that the MD of the new version of the GR-Datum consists of map sheets at the scale 1:50000 (387 for the whole country, according to the distribution of the Hellenic Geographic Military Service- HGMS-, HEMCO 1995, Fotiou and Livieratos 2000). This practically means that the second degree polynomials previously described is rather possible to be identical for maximum four map sheets of the new version’s MD. Thus we should initially refer the old version’s coordinates with respect to the associated 1:100000 sheet7.

We collected common points between the old and the new version of the GRDatum for 11 map sheets located in the Northern part of Greece (Central and Eastern Macedonia). The relevant map sheets are depicted in Figure 5.

At this point is ought to be stressed out that the most difficult issue is the verification of the common points. During the past decades (in some cases up to 90 years) the common benchmarks are either destroyed or severely inclined. On the top of that, the associated documentation is also difficult to be found and to be validated.

Following the flowchart presented in Figure 3, we have the residuals’ statistics quantifying the consistency of the two versions (Table 1, after the removal of the outliers). For each map sheet, we found at least 10 common points between the two versions. In some map sheets we excluded 1-2 points (as outliers).

The results imply that there is no uniform consistency between the old and the new version of the GR-Datum, respectively. The standard deviation ranges from 23.9 cm to 149.5 cm. The mean standard deviation is at the level of 80 cm. It should also be mentioned that the accuracy of the transition between the new version of the GR-Datum to the HGRS1987 (using the second degree polynomials) is at the level of 10-15 cm (HEMCO 1995)8. Roughly, the total transformation accuracy from the old version of the GRDatum to the official HGRS1987 for the examined areas is in the order of 80-100 cm (mean value). Taking into account the oldness of the observations and the problematic old version of the GRDatum, we can consider this accuracy as normal. It practically means that the scale, which can be used for the reliable cartographic map series transformation is between 1:4000 and 1:5000. 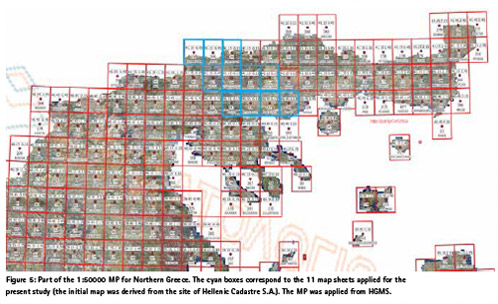 We strongly suggest to the Greek State the creation of a group of specialists (e.g. geodesists, surveyors and cartographers) in order to establish a reliable methodology for the transformation of the old map series, containing useful information, to the official HGRS1987.

1the Hatt projection was developed by the French cartographer Philippe Hatt. It was mainly used for the mapping of the on-shore regions in the Pacific Ocean (Mugnier 2002). Greece is the only European country, which adopted this kind of projection.

2HGRS1987 is the official geodetic reference system of Greece (from the early 1990s) and the Greek Cadastre is based only on this system.

3Practically speaking, the alignment of SAMA’s old mapping infrastructure to the HGRS1987 is a major problem for the Surveyor Engineers, especially in Northern Greece (Macedonia and Thrace regions). The major difficulty is the lack of benchmarks/points. This absence is causing significant pitfalls during their daily professional practice.

4As State’s benchmarks we define here those of the State’s triangulation network. Unfortunately, there is no remaining information for the benchmarks located in the land parcels. The latter ones were called ‘orosima’ -Greek jargon- and they were used for the property identification, having estimated projection coordinates.

5The second degree polynomials do not show uniform accuracy throughout the country. In some cases the transformation (between the two versions) accuracy remains low (Fotiou and Livieratos 2000, HEMCO 1995). The scale of 1:100000 corresponds to dimensions of 30’ X 30’ of a map sheet.

7The MD of the SAMA initially refers to dimensions of 6’X6’ map sheet. Thus, we should convert the coordinates to the associated 30’X30’ map sheet of the new version. This procedure is called ‘change of the map’s center of Hatt’s projection’ and it is described in detail by Fotiou and Livieratos (2000).

8Unfortunately, there is no accuracy information regarding the transformation of the GR-Datum’s new version to HGRS1987 by the use of the second degree polynomials.

9The HGRS1987 also carries inconsistencies, which can reach several decimetres in an absolute sense (HEMCO 1987, Takos 1989). However, for local cartographic/surveying studies (e.g. for a map sheet of 1:50000) the consistency of the HGRS1987 is at the level of some centimetres (see e.g. Giannakidis 2009).

Ampatzidis,D., S. A. Melachroinos (2017). The connection of an old geodetic datum with a new one using Least Squares Collocation: The Greek case. Contributions to Geophysics and Geodesy, 47(1).

Dermanis A. and A. Fotiou (1992). Methods and Applications of the Adjustments of the Observations. Ziti Publications, Thessaloniki,Greece (in Greek).

Giannakidis I. (2009). Comparison of alternative coordinate transformation models between the HEPOS reference frame and the official Hellenic Geodetic Reference System of 1987: case studies in local areas over Greece. MSc Thesis, Department of Geodesy and Surveying, Aristotle University of Thessaloniki (in Greek).

Hellenic Mapping and Cadastral Organization (HEMCO) (1995). Tables of coefficients for coordinates transformation of the Hellenic area, HEMCO Report (in Greek).

Kalamakis, N., D. Ampatzidis, N. Demirtzoglou, K. Katsambalos (2017). The theoretical and the practical aspects of the transformations among the different Greek geodetic datums. The case of the mapping layouts of the Ministry of Agriculture. Proceedings of the 5th Panhellinc Conference of the Association of the Rural and Surveying Engineers, Athens, Greece.

Takos I. (1989). New adjustment of Greek geodetic networks. Journal of the Hellenic Military Geographic Service, Issue No. 36, pp.15–30 (in Greek).