The decade belongs to GNSS

GNSS market forecasting is of great interest to private and public GNSS stakeholders, for business and strategic planning and policymaking. According to the 2010 GNSS Market Monitoring report published by The European GNSS Agency (GSA), the global market for GNSS will grow significantly over the next decade, reaching some €244 billion for the enabled GNSS market in 2020. Delivery of GNSS devices will exceed one billion per year by 2020. Mobile location based services (LBS) and Road will be the market sectors with the highest revenue generation.
The report covers four market segments: Road, Agriculture, Aviation and LBS that represent the largest volume of users and/or public benefits. 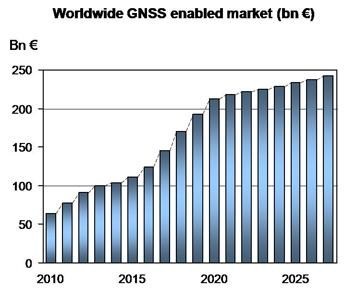 The road transport sector is facing major challenges, such as the demand for increasing safety and for reduced congestion and pollution. These problems are particularly acute in highly populated zones, including big cities and suburban areas. GNSS represents a powerful tool for improving road transport. Not only does it help get drivers where they want to go more quickly and efficiently, but it also promises fairer road-pricing schemes, for example, to automatically charge drivers for the use of road infrastructure.

The report shows that the road transport sector is still the main GNSS market segment, accounting for a share of more than 50%. 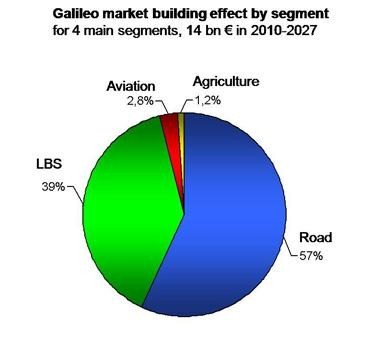 The penetration of receivers in road vehicles, today at 30%, will exceed 80% over the next decade. The Japanese and North American market would reach almost 100% penetrations in next decade whereas penetration in European Union would be around 90%. However, after a period of fast growth, market saturation and competition in the form of ‘smartphones’, often equipped with free navigation capabilities, have resulted in a slowdown in the car-based navigation market. The estimated global device revenues in road sector by the end of 2020 are €87 bln.

Erosion of device prices has been high, driven by declining costs and strong competition. Vendors are using innovation as a differentiator resulting in ‘converged’ products with both communication and multimedia functionalities. Some Personal Navigation Device (PND) vendors are also tapping into new distribution channels, including car dealerships and smartphone application stores.

LBS- GNSS in your hands

Mobile location-based services (LBS) are taking off as progress is being made in different areas and innovation is fast in the very competitive mobile industry. More and more mobile phones now have built-in GNSS capabilities and the awareness of consumers and developers is increasing. The hardware, software and content needed for navigation has become cheaper while the user experience has improved tremendously.

All major mobile phone operating system vendors now provide application programming interfaces (API) with location functions. Some of the most popular applications on the various applications stores are based on navigation.

The integration of accurate hand-held positioning signal receivers, within mobile telephones, personal digital assistants (PDAs), mp3 players, portable computers, even digital cameras and video devices, brings GNSS services directly to individuals, making possible a fundamental transformation of the way we work and play. The penetration of GNSS in mobile phones is therefore expected to increase very quickly, from some 20% today to above 50% within the next five years.

Geographically, as of now penetration of GNSS-enabled phones is much higher in North America and Japan compared to the European Union. However, by 2020, the penetration of GNSS in mobile phones will reach 97% in North America and the European Union, almost 100% in Japan and 82% in China. Total annual core GNSS revenues in LBS are expected to grow between 2010 and 2020 from €12 bln to €96bn.

The aviation market requires the highest possible robustness and integrity. GNSS-based navigation has the potential to greatly complement the traditional systems to locate and track the planes. Moreover, SBAS systems improve the accuracy and integrity of GNSS via a network of ground stations that take measurements of GNSS and broadcast information messages to users via satellite.

The report also assesses the market potential in agriculture segment. It has been observed that in agriculture the low technology GNSS solutions are used for low-value crop cultivation, low accuracy operations and for agro-logistic applications. However, high technology GNSS solutions are also used for high-value crop cultivation or precision operations where levels of accuracy achieved are in the range of 2 to 10 cm.

The report says that the annual shipments of GNSS devices in the agriculture sector are expected to grow in all regions to reach 75,000 units by 2020 in the European Union, 110,000 units in North America and 350,000 units in the rest of the world. It is important to mention that the increased sales are mainly driven by the growth of the fleet and the higher penetration of GNSS in new tractors. Worldwide agriculture revenues will increase over the next decade driven by the increase in device sales from €198 mln in 2010 to €486 mln in 2020.

The GSA says Galileo in the future and EGNOS today open up new and exciting prospects for economic growth, benefiting citizens, businesses and governments throughout the EU and beyond.
The road segment has the potential to reap the largest benefits from Galileo. These benefits derive mainly from a reduction in travel time (a result of better navigation), reduced fuel consumption, better congestion management and the development of intelligent services.

The development of LBS, such as GNSS-assisted medical monitoring and other emergency services, will lead to significant benefits due to the reduction of injuries. In agriculture, the use of more accurate positioning technologies will allow rationalisation and increased efficiency in the use of fertilisers and pesticides. In aviation, the integrity information will increase flight safety and reduce fuel consumption.

In 2009, the GSA developed and implemented a GNSS market monitoring and forecasting process which resulted in first issue of the report in question. This process was developed with the support of VVA and LECG, two consulting companies expert in market analysis and forecasting. The Market Monitoring Model takes as input the data from GSA market studies and reliable industry sources. Moreover, the model is based on a tailor-made selection of econometric techniques. An extensive set of variables are defined by key assumptions on the adoption of GNSS and Galileo. This process allows the simulation of different market scenarios. Additionally, a consistency check was performed for each segment by comparing the model’s results with the most recent reports from independent GNSS market research companies.

The report may be downloaded free here:
http://www.gsa.europa.eu/go/download_the_gsa_gnss_market-report

1) According to the report……, “Despite significant growth since 2006, significant untapped potential remains.” Would you like to elaborate on this?

According to the forecast based on available information sources and which involved several market experts, the global GNSS revenues are still expected to grow at a double digit CAGR in the 2010 – 2020 period. This growth will come from both new applications and expansion of current products and services. In terms of penetration, the biggest impact will come from LBS since GNSS is still only in a small portion of today’s mobile phones. Regarding new applications, there are countless examples such as ADAS (Advanced Driver Assistance Systems). As for GNSS R&D initiatives in the context of the EU 7FP program of the European Commission, being delegated to the GSA, there is a surge of GNSS technology projects proposing creative applications such as using combined radar and satellite navigation technologies to create maps of coastal areas. Advances in EGNOS and Galileo will accelerate these developments.

The relative importance of each market segment is driven by the number of devices being shipped in each segment. LBS handset sales make up the majority, followed by navigation devices used in road transport. In aviation and agriculture unit shipments are much lower due to a smaller addressable market. Nevertheless, aviation and agriculture are important target markets for EGNOS, European satellite-based augmentation system.

3) The majority of GNSS market share is held by companies having their origin in the developed world (65% in EU, USA, Japan in year 2009 all together). How likely is this going to change, say in a scenario where China and India may emerge as one of the important markets for GNSS, in next few years?

We expect the share of emerging countries to increase as it is happening in other sectors of the economy. The revenues from civil applications of GNSS are dependent on the number of devices being shipped. India and China, being among the largest and most growing countries in the world, are expected to generate very important volume of GNSS devices.

The pace of change in emerging markets may be influenced by specific aspects. Actually, some GNSS applications may require structural changes in emerging countries that usually take time. In agriculture, for example, the addressable market can remain small, if farming is more human than technology-driven. In road, the usage of GNSS devices is correlated with the state of the road network in the country.

4) At the moment, it is projected that the Global enabled GNSS market (accounting full prices of GNSS mobile phones in LBS sector) will reach €244 bln in 2020. What could be the factors that may hinder the above projected growth?

Building the forecasting process, we made assumptions on a list of key factors like the GDP growth and the evolution of prices of devices which are influencing the GNSS market trend. The projected growth will also depend on other key environmental factors and of course also on GNSS relative advances vs. alternative technologies.

5) The report has focused on 4 segments – road, LBS, agriculture and aviation. Would you like to name a few more GNSS market segments that may have potential in this decade?

The GSA analyses market opportunities for GNSS in cooperation with industry experts, based on market research information and data available. So far we have focused on LBS and Road, the largest GNSS market segments, as well as agriculture and aviation which are today EGNOS target markets. In the future, we plan to analyse high precision (e.g. mapping, surveying), maritime and public services.

GSA, in the context of the EC Application Action Plan, cooperates and supports the European Commission. The GNSS Market Report will aim at continuing the analysis of GNSS market segments and emerging opportunities.