Around the transit area between the indoor and outdoor environments of buildings, it is anticipated that the number of available measurements may not be sufficient for localization and the undesirable non-line-of-sight (NLOS) and multipath errors would severely deteriorate the localization accuracy. To estimate user location reliably where measurements from global positioning system (GPS) receivers are corrupted or not available, network-based methods have been actively investigated. Among the many network-based methods, localization method based on wireless local area networks (WLAN) has been considered as one of most attractive approaches since sufficient number of WLAN signals for localization can be easily found in most places [1-3].

To design an efficient localization algorithm that combines the measurements from WLAN and GPS, it is necessary to investigate if there are sufficient number of measurements and if it is possible to identify good and bad measurements. To check the possibility of seamless WLAN/GPS localization, an experiment was performed to investigate measurement trends. The trends of both the WLAN and GPS measurements were visualized and analyzed. It was confirmed that more than two GPS measurements were available in the transit area due to the utilization of the high-sensitivity GPS receiver. However, it was found that, due to the high-sensitivity of the GPS receiver, discrimination of the multipath-affected GPS measurements is very important for reliable positioning. In addition, it was also found that and the NLOS-affected WLAN measurements need to be calibrated.

If visible GPS satellites are more than four, it is possible to estimate user locations without relying on WLAN measurements. Indoor/outdoor transit areas, however, are most problematic areas where GPS signals are frequently corrupted by multipath errors or obstructed by surrounding structures. In the cases when visible GPS satellites are less than four, it is helpful to utilize WLAN signal strength measurement to avoid shortage of measurement in estimating user locations. The problem of WLAN measurements appearing in transit areas is that they are usually affected by NLOS errors like those appearing in indoor area. Thus, it is necessary to provide any form of NLOS error calibration strategy. Based on the investigated measurement characteristics, a simple WLAN/GPS hybrid localization method is proposed for accuracy improvement. The proposed localization method is capable of combining GPS/WLAN measurements in the presence of both multipath errors and NLOS errors.

The proposed method is divided into two stages as shown in Figure 1. In the first stage for the preparations, WLAN signal strength measurements are surveyed around the transit area. By the measurement surveying, NLOS calibration parameters are extracted and saved. In the second stage for real-time positioning, GPS measurements less affected by multipath errors are selected based on multipath test statistics. Parts of WLAN measurements are converted to distance values based on the pre-computed NLOS calibration parameters. By combining range measurements from GPS and WLAN, improved position estimates are calculated. 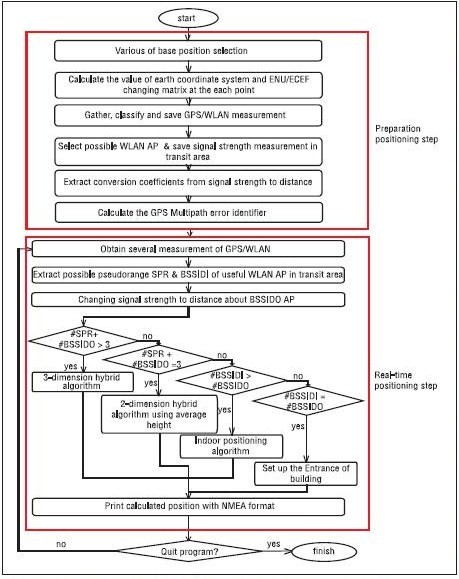 By applying a variation of the algorithm explained in [4] to the surveyed WLAN measurement, the NLOS correction parameters are obtained for the conversion from signal strength measurements to range values. By applying the multipath test statistic algorithm explained in [5] to the surveyed GPS measurements, distribution of the multipath test statistic values are obtained. Based on the distribution, the threshold value for multipath detection is prepared. 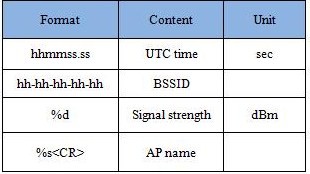 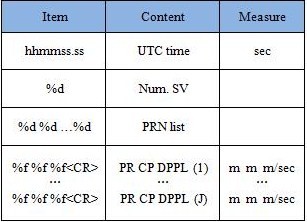