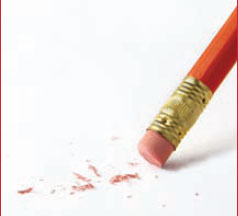 Large scale topographic maps of better than 1:5000 scale with 1 to 2 m contours are currently prepared on digital photogrammetric workstations (DPWS) using block adjusted 3D models derived from aerial photographs. Errors made by operators during vector capture from 3-D models in a production environment require extensive rework. Obviously there is a lot to be gained in terms of cost and time if such errors can be eliminated or at least minimized.

It is generally perceived that the cause for such errors is carelessness and the only mechanisms to deal with it are stringent quality control and increase in expertise of both the operators as well as quality control staff.

In this study an attempt was made to study the factors which contribute to the human errors made by operators from Cognitive Psychology perspective. The human side of man machine interaction comprising of perception, memory, cognitive styles, problem solving abilities, decision making, attitude towards work and stress play an important role in the quality of the final product and therefore the focus of the study was on the persons who carry out digital mapping.

Webster’s New Encyclopedia Dictionary defines six different meanings of an error: a) A deviation from a code of behaviour b) An act involving unintentional deviation from the truth or accuracy c) An act through ignorance, deficiency or accident fails to achieve what should be done d) A false belief or a set of false beliefs e) Something produced by mistake f) The difference between an observed or calculated value and the true value

Based on Generic Error Modeling System (GEMS) of Rasmussen (1986), mapping errors were classified into three types based on the performance level into Skill Based (SB), Rule Based (RB) and Knowledge Based (KB).

Skill based performance takes place with automated and highly practiced patterns of behaviour. According to Rasmussen (1986) “ behaviour at SB level represents sensory motor performance during acts or activities that after a statement of an intention, takes place without conscious control as smooth, automated and highly integrated pattern of behavior.” Generally these are routine and non problematic activities in familiar situations. SB errors can also be called as slips and lapses and arise due to inattention or over attention to the task at hand or attention to the wrong points of the task

Rule based performance is related to problem solving. Performance is goal oriented and is structured by feed forward control through a stored rule. It is assumed that rules are arranged in an order of priority and it becomes imperative for an individual to predict and apply these rules to the task for a successful outcome (Reason, 1991). RB errors take place due to the misapplication of good rules or failure to recognize a situation in which the rule does not apply or application of inappropriate rules. RB errors involve inappropriate matching of environmental signs to the situational component of well tried trouble shooting rules.

Knowledge based performance is involved in problem solving and formulations at a more abstract level of representation. According to Rasmussen (1986) knowledge based level comes into play in novel situations in which actions must be planned on the job or on the task or on line using conscious analytical processes and stored knowledge. KB errors arise during the subsequent attempts to find a solution. KB errors arise when an individual has run out of applicable problem solving routines. They arise from a complex interaction between “bounded rationality” and “incomplete or inaccurate mental models”. Knowledge based performance errors can take a wide variety of forms, none of which are necessarily predictable on the basis of individual’s acquired knowledge. (Backstorm, 1997). Yet another piece of information according to him is that knowledge based performance mistakes are the hardest of all to detect as expertise is required. At best, it is possible to forecast the general cognitive and situational factors that will conspire to create knowledge based performance mistakes (Reason, 1991).

It is also claimed that knowledge based errors are complex & diverse and tend to arise due to limited capacity of working memory and due to misuse or overuse of heuristics and biases in information processing (Tversky & Kahnueman, 1974).

In the context of this study, mapping errors were analysed and divided into the three classes as given below:

b) To assess some of the cognitive, personality and stress variables/ factors for the operators and prepare an error profile for each operator

g) To study the implications of the intervention programme

h) To suggest a model for effective performance in digital mapping

The study was carried out using a total of 53 subjects in three categories.

b) The Supporting Study sample comprising

c) The Main Sample consisting of 30 operators to study mapping performance and errors made by them before and after intervention.

Even though the main sample was 30, mapping activity for 3 shifts (A, B & C) of each individual were recorded for purposes of error identification. Mapping activity was tracked on 90 occasions (30 * 3 shifts) which amounts to approximately 540 hours and fulfills the reliability requirement.

The errors made by operators were studied in digital environment (digital photogrammetry workstations and mapping workstations having relevant software packages) by quality control experts who had extensive documentation support on different types of errors. On the Main sample of 30 operators the following tools were utilized to assess their personality and to obtain feedback regarding error awareness, regulation, time frames, attitudes towards session and efficacy of the intervention programme. 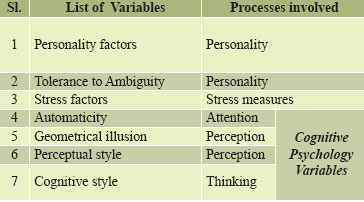 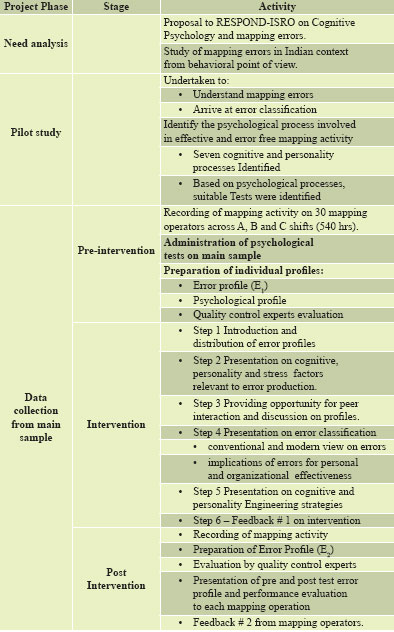 For the sake of clarity, the elaborate procedure adopted in the study is summarized below.

The data related to psychological variables were studied in the context of error production. The psychological factors assessed which are likely to have a negative effect on performance or bearing on error occurrence were considered as risk factors. Risk factors on all psychological tests for each individual member of the sample were identified. For each individual an error profile and a psychological profile was prepared. This was given to them as part of the intervention programme for their awareness, information and understanding. Risk factors for each individual were estimated and presented in the context of error occurrence. This may be seen as possible contributions of error production which, if addressed, could result in error regulation thereby resulting in error reduction. Feed back taken from the sample after the intervention programme has shown readiness to make effort to regulate the performance so as to reduce the error occurrence. Members of the main sample claimed that they made a conscious effort to reduce errors and increase their quantum of work. This is attributed to the contract they made with themselves to self regulate errors, i.e., 46% of them from next day, 26% of them within two days and 26% of them within a week.

The conclusions drawn from this investigation are as follows:

• Classification of mapping errors as per cognitive psychology perspective into (i) skill based, (ii) rule based, and (iii) knowledge based performance level errors is adequate for the meeting the objectives of understanding human factors that cause errors and to evolve strategies to reduce them.

• Skill based performance level errors were found to be 32%. This may be because mapping activities are predominantly skill based involving cognitive activities like attention, perception, automaticity, etc.

• Mean error occurrence of the sample before and after intervention decreased to 13.22 from 18.09.

• Results show a considerable increase in quantum of work done after intervention.

• Based on the findings a working model for effective digital mapping performance improvement procedure from cognitive psychology perspective has been evolved. 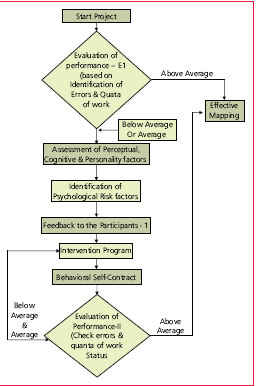 The suggestions are the outcome of a maiden research in the mapping domain in this country. It is hoped that this would set us thinking in a new direction to face the new era that brings newer challenges.

• Bringing error occurrence to the operator’s attention periodically, would act as a feed back on performance.

• While selecting the candidate for the jobs relating to mapping, recruitment department may use psychological tests as another screening test. Test like cognitive styles, perceptual styles, personality and stress may be administered and then based on these results, suitable candidates may be selected.

• It is important to make an effort to understand and identify the human risk factors in operators. This would help in addressing the issue rather than the person specifically. If unaddressed such factors would hamper healthy interpersonal and cultural climate of the organization.

• Individuals who are working with computers on activities similar to that of mapping (i.e., not programming or text processing which are logical operations) for example air traffic control, thematic image interpretation, process control systems, animation and graphic arts, etc., may be studied. 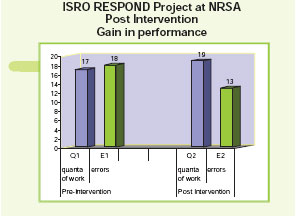 • Backstorm, .T (1997) (june 29-July 4). Theoritical Explanations for the non use of safe Gaurds. Paper presented at the “ From experience to innovation” Proceedings of the 13th Triennial congress of International Ergonomics Association, Tampere, Finland.

• Tversky , A., & Kahneuman, D. (1974), Judgement under uncertainty:Heuristic and Biases Science.