India has long coastline of 7517 kms with 12 major ports and 187 minor & intermediary ports. Major ports all together handled 423 million tones traffic & non–major ports all together handled 519 million tones traffic during the year 2006-07. Traffic at Indian ports has been growing at the rate of over 11% during last 5 years and with continuing rapid growth in trade, port traffic is expected to grow further. Lack of port infrastructure has been one of the major problems (i.e. low draught & inadequate back up services) in our maritime development. Shippers prefer shipments by large size & deeper draughts vessels, which is more economical in cost of operation. So, to accommodate such bigger vessels, the required depths should be available. Accordingly there is huge demand for dredging & quality hydrographic services at the Indian Ports as the channels to be widened & deepened to accommodate bigger vessels. Almost all the major ports in India have plans to widening & deepening their approach channels in order to accommodate bigger ships. Further, the maintenance-dredging requirement of ports is substantial considering the siltation problem at the ports. 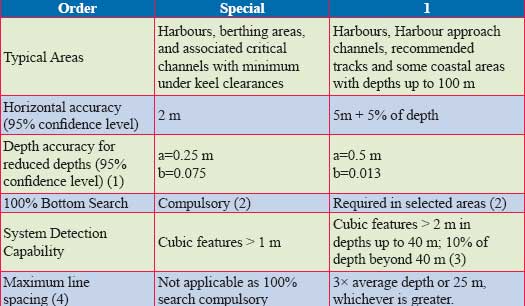 A completely new situation has risen after the total revision of chapter V of the annex to SOLAS that maintains that hydrographic services are binding to Governments under international law.

– For the first time, international law makes it mandatory to operate hydrographic services. This obligation applies to all states that are parties to SOLAS.

The new edition of IHO standards for hydrographic surveys describes a very important change. The accuracy of a survey is no longer dependent on the scale of the analogue chart. The accuracy as well as resolution of a survey depends on the type of the area to be surveyed. The preface of IHO standards recognises that hydrographic data is also important for coastal zone management, environment monitoring, resource development, legal and jurisdictional issues and coastal engineering works etc.

2) For safety of navigation purposes, the use of an accurately specified mechanical sweep to guarantee a minimum safe clearance depth throughout an area may be considered sufficient for above order surveys.

3) The value of 40 m has been chosen considering the maximum expected draught of vessels.

4) The line spacing can be expanded if procedures for ensuring an adequate sounding density are used.

For ports & harbours, and especially for those where the underkeel clearance is small, 100 % coverage of the seafloor is required during the sounding process in order to make sure that all potential hazards are mapped. It is not possible by single beam echosounder alone. So alternative technologies available are as follows:

• Mechanical sweeping is best but time consuming and therefore expensive. •

Towing side scan sonar is often impractical in confined areas such as ports.

• Compact high frequency multibeam echosounders, probably most viable alternative for the future, which can comply with the requirement of SP-44.

Most ports have restriction on the depth available for navigation. This depth is referred to as ‘declared depth’ and is determined from hydrographic information from recent hydrographic survey. Ports which operate with minimum underkeel clearance for shipping use this declared depth in determining the loaded draught of vessels using the port.

Minimum underkeel clearance can be determined from the following factors.

• The vessel squat and settlement (related to speed)

• The vessel manoeuvring characteristics • Increase in draught of vessel due to vessels roll, pitch & heave movement

• Accuracy in the predicted or measured tide

With increase in competition to attract business towards the ports and reduce the operating costs, the stakeholders are questioning the allowance factors in the determination of underkeel clearance. Some ports have developed a dynamic underkeel clearance that measures wave heights, wave direction and actual accurate tide heights to determine the maximum draught in which the vessel can load.

The technologies that available to hydrographic surveyor now have greatly increased the surveyor’s ability to provide highly accurate depth & position. These includes motion sensors, multibeam echo sounders, radio tide gauges, RTK GPS, Survey software for on-line data logging, computing, huge data managing power & processing the result in required format. Because of this available technology, the surveys could be made repeatable. With this degree of repeatability it is then possible to place a high degree of accuracy of depth on the published chart.

The National Maritime Development envisages the capital dredging of major ports and navy to the tune of Rs.6,304 crores in addition to maintenance-dredging requirement.

To select suitable dredgers, equipment, methodology for dredging, quantity to be dredged and cost estimation, it is very much essential to carry out pre-dredging hydrographic, geo-technical & seismic survey in order to know the precise seabed profiles as well as sub-surface strata which is supposed to be dredged out.

In order for optimum deployment of costly dredgers, it is very essential to provide on-line progress of dredging works to dredgers by means of providing them dredging monitoring sounding charts.

Port authorities should adopt existing internationally accepted standards for surveying as set out above referred publication SP-44 and produce charts, which confirms IHO chart specifications for pre & post dredging survey so that cost of dredging can be worked out precisely as well as make it possible to declare a dredged route/ channel ‘cleared’ to required depth.

ECDIS, or Electronic Chart Display and Information system, has been developed for navigational purposes but is in reality a full-fledged Marine Information System (MIS). Its data structure makes it useful for GIS, Port or Coastal Management.

To make all Indian ports more competitive & safe, it is very much essential that Port authorities should adopt the existing internationally accepted standards for surveying as set out in the above-referred publication SP-44 and produce charts that confirm IHO chart specifications

• Set up a central certification agency for this work. That may be the National Hydrographic Office or other dedicated survey organisations, such as Minor Ports Survey Organisation

• Creation of quality resources required for this work.

6) Technology for efficient mapping of ports and port entrances-Hydro1999.