MARITIME Boundary Delineation (MBD) with neighbouring States is an essential need for national security and offshore development, more so for developing States with sizeable Exclusive Economic Zone(EEZ) and Continental Shelf Areas. Whilst it is laudable that India had finalized the MBD with 5 of her 7 neighbouring maritime states(mostly based on equidistance principle), her inability to achieve an acceptable maritime boundaries with Pakistan and Bangladesh, is hampering offshore economic development to the full extent, especially on the Energy( oil/gas/gas hydrates) and Food ( fish,etc) Securities. What is hampering a fairly simple MBD based on international law(UNCLOS) and accepted technical principles, is Pakistan linking it to other disputes like Kashmir. Adoption of the well established international law, principles, practices and some political push to accept minor concessions will ensure an amicable MBD with Pakistan.

For any satisfactory resolving of the MBs, the UNCLOS 1982 provides reasonable frame work, even in the light of the aspirations for Maritime Zones like EEZ and Continental shelf(CS). Delays in MBD unduly push up cost of Investments at Sea, especially in a liberalised World Economy. Specific provisions of the National Maritime Zones Acts of Pakistan (including rules thereunder), not in conformity with the UNCLOS provisions, have also contributed to the complication. Historical waters concept can be applied to some areas, as was done by India in the MBD with Sri Lanka in Palkbay. Fortunately, there are a number of MBD Agreements worldwide between Maritime States and some of the nuances for resolving the MBD with India’s Neighbours, including the Riverine Sir Creek area, can be learnt from such Agreements. Equidistance principle from the Baselines under Article 15 of UNCLOS, Thalweg Principle on Centre of the Navigable River/Channel, proximity of the Islands to the mainland coast/river/channel, can resolve many MBs. The promulgation of the BL system in accordance with UNCLOS provisions will help legal enforcement and reduce undue tensions. India, regrettably, has not taken the important aspect of state practices with all the security needs with seriousness, especially in Sircreek area.

The issue of India- Pakistan MBD is delayed, not for complexity on International Principles amd state practices, but because of its linkage to other politically sensitive issues. Historically,Sircreek dispute started over a pile of logwood on her banks in 1900s, which led the then rulers of Kutch and Sind provinces referring the issue to the then Govt of Bombay. The agreed Resolution of 1914 was documented in the form of Map S44. This map was implemented in 1925 through Pakistan Map B74 with the Centre of the Navigable Channel as the Maritime Limit upto SirMouth. Sircreek is approximately 60 KM long upto the Northern Point and the East-West boundary line is 38 KM long. The Western Boundary Tribunal, agreed to by both parties, gave the award in 1968, which upheld 90% of the Indian claim in the Rann of Kutch along the EW line, but left the Sircreek Maritime Demarcation to the dotted lines in the centre of the Sir Creek channel. Out of the 68 pillars erected along the East- West line,only 38 pillars are intact in 2005. Despite a clear way ahead, role of the interlocutors and substantialrounds of talks under the Composite Dialogue on Confidence Building Measures(CBM),both countries have failed to arrive at an acceptable MBD. 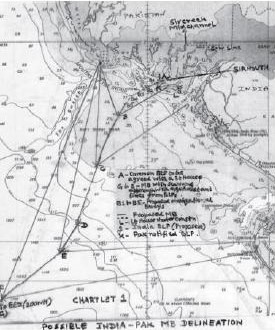 The British Govt had maintained records of the Geomorphology of Sircreek area, which provide reasonably good data to resolve the MBD on historical data basis. The Resolution of 1914 between the then Sind Province and the State of Bombay was laudable. However the actual demarcation over maps in 1924 created the present issue of whether to give credence to the well established International Principle of Thalweg( the centre of the Navigable Channel in Sircreek) or the broad green ribbon line to broadly indicate( and not delineate!)land boundary as per then prevalent cartographic principles. India has carried out proper hydrographic surveys using modern surveying equipment in the area from time to time to update the Navigational Charts for the safety of mariners, which has revealed perceptible changes in Geomorphology, including the crucial centre of the Navigable Channel in Sircreek. The shift in stand from historical data to joint survey on the part of Pakistan seems deliberate to keep better options and derive more maritime areas. It is also important to note that any further delay in MBD from EEZ to Sircreek beyond 2009, may result in the Continental Shelf areas of both countries coming under the ambit of the International Seabed Authority(ISBA) under UNCLOS provisions, unless the deadline is extended by the State Parties again in their meeting at the United Nations in 2008.

The consistent Indian stand is based on historical data, international/State practices and UNCLOS provisions. India wants the East-West horizontal line(marked by the erected pillars) as the land boundary, the centre of the Navigable Channel upto Sirmouth marked by the dotted lines in 1914/1924 agreements as the MB within Sircreek and the common BLP at the centre of the SirMouth based on legally published Navigational Charts. India has also officially protested the BLP “K” of Pakistan on the eastern bank of Sircreek. The historical use of Sircreek waters for fishing by the Indian Fishermen over decades further strengthens Indian position. Provisions of paras 9 & 10 of the1914 resolution is reflected by the dotted lines in the Centre of the Sircreek channel in all Maps and Charts, including the final map of 1924 on delimitation. India has suggested a seaward approach from EEZ and highlighted the urgency in achieving the MBD view Continental Shelf claims deadline in 2009.

Pakistan has argued that Sircreek is not Navigable, common BLP should be their point “K”, Equity under MZP Act and joint survey be carried out to establish the changes in the Geomorphology of the area. Their desire to control more areas in Sircreek by shifting the East –West horizontal line southwards and MB within Sircreek channel to point “K” is obvious.

Implications for India on MBD with Pakistan

Pakistan’s tactical approach from historical to present survey data lies in the Geomorphological changes caused by reported artificial melting of their Glaciers with attendant river training since 2002 and the Satellite Imageries of the area, indicating shifting of the centre of the Navigable Channel Eastwards, coming close to their BLP ‘K’. The Joint Survey carried out in early 2007 may not fully alter the picture, except that now a fully modern coordinated system is now available for the joint survey data. The Equity Principle of Pakistan is not tenable under Articles 69 & 70 of UNCLOS, since Pakistan is neither Geographically Disadvantageous nor Land/Shelf locked, but has its own Maritime Zones upto the EEZ and possibly the Continental Shelf. If the claim of Pakistan is accepted, high value targets in Gujarat will come closer to their reach for land/sea/air attacks, besides Political and Economic repercussions, especially on the Fisheries and Natural Resources wealth,with some reduction in Indian Territorial Waters/ EEZ. The inability of India to promulgate her Baseline System(despite being finalised in 2003)has further weakened our position and legal enforcement of violations. MBD in Sircreek must avoid a repeat of Kachativu(SriLanka) with attendant prolonged irritants in relationship. It is important to underline that any major concessions made by India is likely to be sought elsewhere also.

There is merit in both India and Pakistan resolving the MBD through a compromise of Historical and Joint Survey data, but with adherance to established principles of Thalweg(ie the centre of the navigable channel)and the UN Handbook on MBD without unduly affecting each others concerns. It would be pragmatic to adopt the Seaward Approach from 200 NM to approx 20 NM from Sircreek, based on Equidistance principles from both main coasts and without involving any disputed BLPs in Sircreek and thereafter resolve the balance 20 NM of MBD upto Sir Mouth. Thus approx 180 NM of well coordinated MBD would facilitate Confidence Building and enable both countries to exploit their Natural Resources in an ever increasing investment costs with attendant effects on Energy and Food Security. Common BLP in Sircreek can then be finalised based on historical and joint survey data with minor adjustments.

Imperatives for Peaceful MBD with Pakistan.

Whilst agreeing on a just Maritime Boundary, some least cost measures must be adopted that would minimise future irritants, out of which a CBM on Fishing is a top priority. A well coordinaed mechanism between the Security Agencies of both countries in conflict situations, will go a long way in minimising tensions that both States had witnessed since Independence. An established navigation system of Lighthouse/ Lighted buoys will help guide the fishermen andsecurity agencies against entering each others legal waters. The general light house accepted for establishment at Kori Creek as per Godbole Committee on internal security in 1999, be established without any further delay, even by resorting to an offshore platform mode with the help of oil exploration firms.

Resolution of the Maritime Boundary with Pakistan on established principles of UNCLOS with some adjustment is most desirable for lasting Peace and Economic benefits. It is essential to learn from past MBD worldwide and ensure a more comprehensive agreement( including modern cartographic aspects), that will ensure lasting peace in Maritime Areas, especially from the angles of Fishermen from both sides and Offshore resources Exploitation. India would do well to promulgate the already finalised BaseLine System and claim her Continental Shelf areas with supporting Scientific and Technical data before the UNCLCS by 2009 and prepare to negotiate MBD on overlapping Continental Shelf areas with Pakistan. It is important for india to note that there will be common threads in the MBD with Pakistan and Jurisprudence is necessary in the principles and adjustments.

Resolution of the Maritime Boundary with Pakistan on established principles of UNCLOS with some adjustment is most desirable for lasting Peace and Economic benefits. It is essential to learn from past MBD worldwide and ensure a more Comprehensive Agreement that will ensure lasting peace in Maritime Areas, especially from the angles of Fishermen from both sides and Offshore resources Exploitation. India would do well to promulgate the already finalised BaseLine System and claim her continental shelf areas with supporting Scientific and Technical data before the UNCLCS by 2009 and prepare to negotiate MBD on overlapping Continental Shelf areas with Pakistan, Srilanka and Indonesia. It is important for india to ensure jurisprudence in the principles and adjustments of Maritime Boundary.