GPS antenna: from relative to absolute

Positioning by GPS can be derived today with a precision of a few millimeters. A GPS receiver determines the distance between the electrical phase center of its antenna and the phase center of a GPS satellite’s transmitting antenna as a pseudorange or a carrier phase observation. It is well known that the phase center of the antenna is not a stable point.

For each GPS receiver’s antenna the phase center changes with respect to the elevation angle and azimuth of the incoming satellite signal (Rothacher et.al., 1995). Different antenna calibration models are given in general by a set of antenna offsets with respect to the mechanical reference point and a list of variation values that help a user to refer to the ground points under determination.

Knowing Phase Center Variations (PCVs) is especially important in case different antenna types are used at the end points of a baseline. Mixing antennas usually happens in GPS regional and permanent networks like national networks, IGS and EPN. An uncalibrated antenna will certainly introduce errors that combined with other error sources result in significant erroneous point estimations, growing on long baselines (Mader 1999, Fotiou and Pikridas 2006). Even if identical antenna types are used the effects of PCV values do not cancel out for long GPS baselines. This is due to the earth curvature that causes elevation differences and therefore common satellites are seen at different elevation angles by the end points of a baseline.

The relative phase center variation models are based on the assumption that the Alan Osborne antenna type AOAD/M_T has been approved of being the “Zero” antenna. This antenna type forms a standard with elevation dependent variations set to zero referring to a mean fixed offset. PCVs for a calibrating antenna can be determined using short-baseline field measurements (Rothacher et.al., 1995). Thus for each antenna type correction values were adopted relative to the external or mechanical antenna reference point (ARP, MRP). A database of relative calibrated antenna types has been generated with free access to everyone. The drawback is that the corrections are dependent on the zero/reference antenna and that PCVs at low elevations are not reliable due to the increment of noise and multipath in measurements below 10 degrees (Mader 1999). 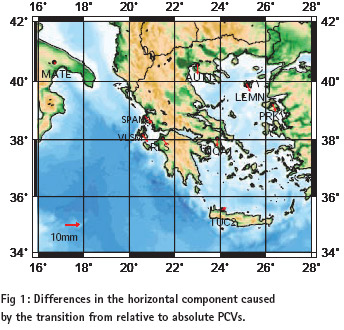 Combining GPS with other space-geodetic techniques becomes difficult in case of unmodeled systematic errors due to improper GPS antenna calibration models. As a consequence scale differences have been seen in GPS reference frames. Due to the above mentioned disadvantages relative models can no longer satisfy the increasing accuracy requirements.

Until November 2006 relative elevationdependent PCVs were applied within the IGS and EPN. After that date (GPS week 1400) the IGS has adopted the absolute PCVs for its routine generation of precise orbits and station coordinates. In IGS-Mail 5438 (2006) a new file with absolute antenna models, named igs05_1390.atx, was made available to the GPS community. Ever since several updates of this file were followed. The EPN started to use absolute antenna models at the same time with IGS.

The absolute calibration antenna models have been developed by the Geo++ company located in Garsben – Germany and a group of researchers from the University of Hannover (Wübbena et al. 2000, Völksen and Menge 2002). Absolute antenna offsets and PCV values are determined by means of a robotic system which include azimuthal values and elevations down to 0◦. The robot carries out fast rotations on different axes increasing the efficiency of the method. An advantage of this technique is the determination of a 3D offset and PCVs from 0◦ to 90◦ elevation angles with high precision and accuracy. Moreover the whole process takes place in an almost multipath – free environment. A complete set of absolute PCVs for the known tracking antennas is nowadays available. 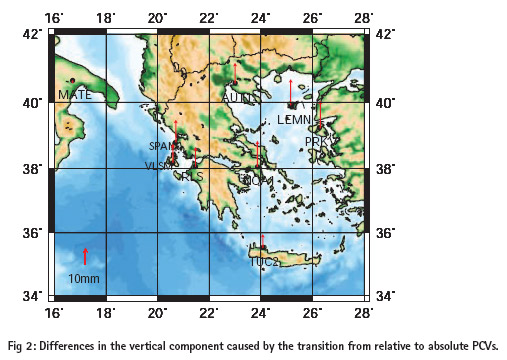 Studying the impact of absolute versus relative calibration models

In order to estimate the impact of switching from relative to absolute calibrated antennas, a regional network of nine GPS stations was processed and adjusted. Eight of the selected stations are located in Greece and one station in Italy: AUT1 in Thessaloniki, NOA1 in Athens, TUC2 in Crete island, LEMN in Limnos island, PRKV in Lesvos island, RLS in Achaia, VLSM in the island of Cephalonia, SPAN in Lefkada island and the IGS/EPN station MATE in Matera (Italy). Four of the above stations (AUT1, NOA1, TUC2, MATE) are part of the EUREF GPS Permanent Network (EPN), (Bruyninx, 2004) while the rest five stations belong to the National Observatory of Athens Permanent GPS Network. It should be noted that the antennas types of the test network were LEIAT504 (AUT1, NOA1, TUC2), LEIAX1202 (RLS, VSLM), LEIAX1202GG (LEM, PRKV, SPAN) of Leica Geosystems and TRM29659.0 (MATE) of Trimble.

The Bernese GPS Software v5.0 (Dach et al., 2007) was used to process the data. The standard method was based on the script file RNX2SNX with slight modifications (Chatzinikos et al., 2007). Some basic options of the used processing strategy should be pointed out:

• One tropospheric parameter for each hour

The time period of GPS observations covers seven days: 190 GPS day to 196 GPS day, 2007. Daily solutions of the GPS network were processed first and the multi-session solution for the whole period was followed.

The impact on point positioning from relative to absolute calibration antenna models was studied by coordinate comparisons carried out by two different network solutions where MATE station kept fixed:

1) In the first network solution the IGS05 reference frame and the absolute phase centre variation values (file: IGS05_1455.atx) for the GPS antennas were used.

2) In the second solution the IGS05 reference frame and the relative phase centre variation model (file: IGS_01. atx) for the GPS antennas were used.

In figures 1 and 2 differences caused by the transition from relative to absolute models in the horizontal and vertical component are shown accordingly. In figure 1 it is clear that latitude is more affected than longitude. For the horizontal component, the difference between the coordinates of the two solutions varied from 1 to 5.5 mm. Almost all GPS stations showed the same horizontal displacement, a strong indication of a systematic error between the two models.

A second comparison should examine the character of the coordinate differences between the two solutions. The similarity transformation model, known as the Helmert transformation, was proved a good choice. The estimations of the seven transformation parameters and the aposteriori rms are given below:

It is obvious that the two solutions reflect a systematic difference and define different coordinate frames with a significant translation. The presented comparisons show that the use of the more accurate absolute antenna models induce systematic differences with respect to the previous relative models. Therefore the epoch – comparison of GPS campaigns in regional and or global scale must take into account similar systematic effects.

The impact of the conversion from relative to absolute PCV antenna models is of great importance in regional and global GPS networks where high accuracy standards are required.

Solutions derived from relative and absolute models reflect a meaningful systematic difference which could be eliminated by proper transformation models like the 3-d Helmert model.

An application to a Greek regional GPS network with baselines up to about 500 km and specific antenna types showed that the difference is mainly a translation, the height component is greater than the horizontal and the displacement grows with the distance from the fixed point. Similar results have also been reported by other researches.