GAGAN signal in space-validation and utilization

A GAGAN (GPS Aided Geo Augmented Navigation) is an Indian SBAS (Satellite Based Augmentation System) intended to provide accurate and reliable navigation information for all phases of flight over the Indian FIR (Flight Information Region) and in the adjoining areas applicable for safety-of-life operations meeting the performance requirements of ICAO. The implementation of the GAGAN program is being realized through the following two phases:

The objective of GAGAN-TDS was to demonstrate the feasibility of SBAS implementation over the Indian region with a minimum set of elements, and to establish the requirements for an operational SBAS. This phase has been completed in August, 2007. The objective of GAGAN-FOP is to realize a certified and operational SBAS over the Indian FIR with provision for expansion. During GAGAN-FOP, it is planned to add redundancies to the existing TDS elements and install additional elements in ground and space segments. The ultimate goal is to provide RNP-0.1 service over Indian landmass and APV-1.0/APV-1.5 service in the Indian FIR. The GAGAN FOP shall comply with ICAO safety-of-life operations. The implemented GAGAN shall be compatible and interoperable with other SBAS systems and provide seamless air navigation services across regional boundaries.

The FSAT (Final System Acceptance Test) for GAGAN-TDS was completed on 14-15th August, 2007 using the signal-in-space (SIS) from INMARSAT-4F1. This paper discusses the activities conducted using GAGAN Signal in space (SIS) for performance validation and SIS utilization. The performance of GAGAN SIS has been validated in static and dynamic modes and the SIS has been utilized for verification of GAGAN Signal in Space availability in fringe areas, GAGAN SIS dynamic tests on aircraft and validation through DGPS and establishment of reference points at airports.

First experiment was conducted to verify the GAGAN SIS availability at various fringe locations of India (beyond the perimeter covered by the GAGAN reference stations). This exercise was carried out at Dibrugarh and Agatti airports in January 2008. In this activity, two SBAS receivers were programmed, one as SBAS receiver and another as GPS receiver. The parameters like signal strength, improvement in positional accuracy of SBAS over GPS and availability of service in that area were checked.

The second experiment was to carry out dynamic tests using aircraft with the objective of verifying the performance over a day in terms of accuracy, level of service and availability through comparison against conventional Navaids, validation with DGPS and SIS availability. A flight-certified SBAS receiver was flown between Hyderabad and Bangalore on an NRSA aircraft. The accuracies and availability of SIS during the flight was verified through independent verification of the results observed at the GAGAN control centre. Another exercise was carried out with FIU (Flight Inspection Unit) aircraft at Calicut airport in December, 2007 and at Bangalore in the 1st week of February 2008.

The utilization of GAGAN SIS was achieved through establishing reference points at the selected airports to aid the FIU (Flight Inspection Unit) in validating the GAGAN signal in space. The establishment was carried out at Bangalore airport and major airports including Delhi, Amritsar, Jaipur, Ahmedabad, Bombay, Gauwahati, Agartala, Imphal, Calcutta, Chennai, Hyderabad, Trivandrum, Mangalore and Coimbatore. Further activity will include the placement of a reference or base station at established reference point and the rover receiver on board the FIU aircraft. The activity would require the recording of GAGAN SIS data with SBAS receiver over a period of 72 hours. The reference point position will be calculated with suitable post processing techniques for better positional accuracy (1 m). The reference point position calculated will become the baseline for FIU related accuracy and availability checks to calibrate other conventional navigational aids at the airport.

The paper provides a detailed description of a few of the technical activities, which were carried out during the performance validation and utilization of GAGAN SIS in India i.e. SIS availability at fringe locations, Dynamic tests using aircraft and validation through DGPS and Reference points at airports. Each of these activities was designed with specific objectives and a detailed plan was laid out to complete the experiment with relevant instrumentation for the experiment. A few of the interesting results obtained during each of the experiments have been included in this paper.

The GAGAN SIS was primarily intended to be available over the perimeter covered by 5 reference stations in GAGAN i.e. Jammu, Ahmedabad, Trivandrum, Port Blair and Gauwahati (Figure 1).

The SIS availability at fringe locations was verified which are outside the perimeter. A few results are included. The figure 2 shows the SBAS East-North error, which is contained well within 2.0 m accuracy, as per the specifications of SBAS. The figure 3 shows the integrity parameter of Horizontal Protection Limit (HPL), reaching a peak value of 100 m, which is meeting the RNP-0.1 specifications of 185 m HAL (Horizontal Alert Limit). 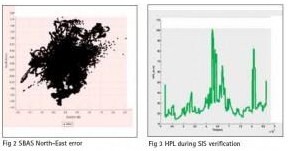 The above tests confirmed the accuracy and integrity of GAGAN SIS on the fringe locations of GAGAN-TDS perimeter.

The dynamic tests using a SBAS receiver on a Beach King Aircraft VT-EBB of NRSA were conducted for assessing GAGAN-TDS SIS performance. These tests were carried out between 12 -18 September 2007, for different sorties between Hyderabad and Bangalore with multiple numbers of reference stations along the track. The figure 4 represents the block schematic of the dynamic tests. 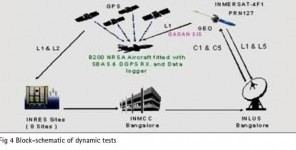 The block diagram of test setup (SBAS receiver and a GPS receiver) is shown in figure 5: 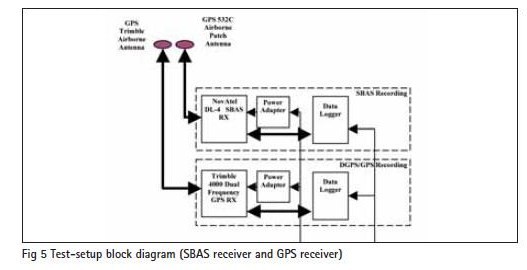 The aircraft was fitted with one SBAS antenna connected to SBAS receiver recording logs in real time. Another antenna was connected to Trimble GPS Receiver. The 6 ground reference points along the track: Hyderabad, Shadnagar, Nagar Kurnool, Emiganoor, Ananthapur and Hindpur (separated by 100 Km) were positioned with GPS Reference receivers during the flight trials (Figure 6). The reference data was collected from all six reference stations and the real time data collected onboard GPS was post processed for DGPS position in order to get the reference trajectory. Additionally, the SBAS receiver receives the GPS signals on-board the aircraft and applies the corrections broadcast by GAGAN GEO to obtain improved position. The accuracies (GAGAN with respect to DGPS) as obtained in Up, North and East directions are provided in figure 7, 8 and 9 respectively. 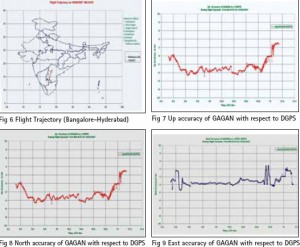 These reference points will be used for FIU aircraft related activities of accuracy and availability checks and also to calibrate other conventional navigational aids at the airports.

The paper has covered the validation and utilization of GAGAN-TDS SIS through various static and dynamic tests, which provided a verification of the achieved accuracy and integrity.

The future scope of work in GAGAN-FOP involves the certification of SBAS to provide improved accuracy and integrity required for APV-1.0/ APV-1.5. GAGAN-FOP is planned as an augmentation of GAGAN-TDS with the addition of ground elements (reference stations, uplink stations and master control centre), apart from the development and implementation of a region-specific ionosphere model. The space segment in GAGAN-FOP will consist of GSAT-4, GSAT-8 and GSAT-10.

The authors also wish to express their sincere thanks and acknowledgement to various working teams on GAGAN from AAI and ISRO; responsible for carrying out the activities described in this paper. The relevant technical information was generated as a result of the analysis of various experiments, which have been used extensively in the preparation of this paper.