Cadastre as a crucial component of SDI ensuring sustainable development

The modern cadastre cannot be considered without mentioning issues related to the SDI (Spatial Data Infrastructure) and SES (Spatially Enabled Society). The SDI allows the network of spatial web services and data to be utilised by the Spatially Enabled Society in order to make correct and reasonable decisions with the use of spatial data, including cadastral data. The SDI combines and integrates not only spatial data, but also the information society. The well organised and administered cadastre is the basis and the most important platform for the development of the future, spatially active society, the modern land management system and the sustainable development (Steudler, Rajabifard 2012).

Considering the importance of the cadastre, particular countries place the cadastral parcel as the basic, spatial reference object for different, thematic public registers. At the same time they establish the obligation to publish public registers in Internet. That happenned in the European Union countries after implementation of the INSPIRE directive (Directive 2007/2/EC). Spatial data infrastructure, authorised in Poland by the INSPIRE directive through implementation of the act on spatial information infrastructure in 2010, assigned the full powers to the Surveyor General of Poland, not only as the leading body for 15 spatial data themes, but also as the body, responsible for coordination of data harmonisation for all spatial data themes (Pietrzak et al. 2014; Bielecka, Zirowicz-Rutkowska 2013).

In order to apply good practices in the fi eld of the cadastre and to develop international standards, works of the International Federation of Surveyors were initiated in this fi eld. One of the documents was developed in 1998 and it is called Cadastre 2014 – A Vision for the future cadastral system (Kaufmann, Steudler 1998); the second one was completed in 2014, Cadastre 2014 and Beyond (Steudler 2014). At the same time, considering the correctly organised and administered cadastre, the international ISO 19152 Standard – Geographic information — Land Administration Domain Model (LADM), was developed. The spatial data infrastructure, the spatially enabled society and the sustainable development are inseparably related; it is illustrated in Figure 1. 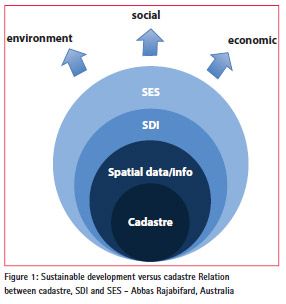 The importance of cadastral data was refl ected in INSPIRE. A cadastral parcel is one of the themes of the fi rst annex to the INSPIRE directive. The INSPIRE directive focuses only on geographical part of cadastral data, so the parcel is defined as “areas defi ned by cadastral registers or equivalent” (Data specifi cation, 2010). INSPIRE does not aim at harmonising the concepts of ownership and rights related to the parcels. It was assumed that cadastral parcel should be used as ”locators for geo-information in general, including environmental data”.

The cadastral parcel is described by some mandatory attributes e.g. geometry, identifi er, cadastral reference, and the label of the parcels that supports their identifi cation on printed maps. “In case of availability Member States are also requested to supply information on the area of the parcel, when the parcel has been created/changed/retired, and the reference point, which is especially useful for visualization”. Moreover, the reference to the national registers as a property (attribute) of the INSPIRE parcels national data sources can be reached. Using this approach other information, like rights and owners can be accessed fully respecting the national legislation on data protection. The data model for INSPIRE cadastral parcels is harmonised with ISO 19 152 Land Administration Domain Model. The INSPIRE Cadastral parcels model is very simple but flexible that allows data providers to publish their existing data in the efficient way. 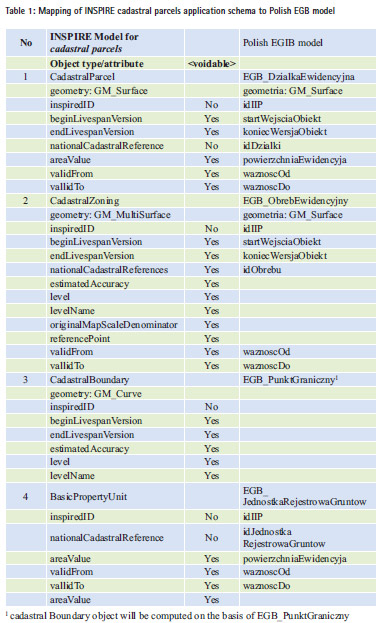 The new approach to data acquisition

On July 12, 2014 the amendments to the Law of Geodesy and Cartography, being the basic law in the field of geodesy and cartography in Poland, came into force. Besides many rules, such as professional responsibility of surveyors, this law settled issues concerning fees for materials and databases of the state geodetic and cartographic resources, and, therefore, it settled fees for the use of the SDI databases, financed by public funds. Previous amendments, approved in 2010, introduced the necessity to disseminate geodetic data (including cadastral data) by means of web services. And, following the INSPIRE directive, the obligation to review and search them, free of charge, using view and discovery services, was also introduced. issued as amendment to the Law of Geodesy and Cartography; however, they settled the issues of acquisition, storing, updating and dissemination of the SDI data. In most regulations, attention was paid to conditions, when the surveyor, who implements geodetic and cartographic works and, thus, enriches the databases of the state geodetic and cartographic resources, pays lower costs for the use of the data, than other, external users. It was also assumed that public entities would be allowed to use the data from the resource free of charge.

Cadastral data is characterised by the high variability in time; unfortunately this is delays. However, amendments to the Law of Geodesy and Cartography, which came into force on July 12,2014, introduced positive changes in this field.

They forced the bodies, which maintain the cadastre, to disclose introduced changes within 30 days since the date of registration; the bodies and institutions where such changes occurred, were forced to send documentation (e.g. a notary – a notarial act) within 14 days since the date the legal effects of this documentation comes into force. This is a kind of a substitute of the multidimensional (including 4D) cadastre, desired in Poland. Although the introduced solutions are not the 4D cadastre, but it is an important step forward. We are sorely lacking the multidimensional, or at least the 3D cadastre. Only partial details are disclosed in the 3D cadastre, by disclosing information on premises in its the descriptive part. As for now, complete legal regulations are missing, which would allow for creation of the multidimensional and multitask cadastre. Cadastral data should be urgently integrated with data from other registers and legal and organisational procedures should be established to avoid data disintegration and to meet the AAA (Accurate, Assured, Authoritative) requirements.

Conceptual model of cadastral data in Poland was described in the Ordinance of the Minister of Regional Development and Building Industry of March 29,200 on the lands and buildings register. The important amendments to this act came into force on December 31, 2013 (Ordinance 2013). This model utilises the international LADM Standard, includes packages responsible for parties (people and organizations); basic administrative units, rights, responsibilities, and restrictions (ownership rights); spatial objects (parcels, and the legal space of buildings). The possibility to harmonise Polish cadastral data with INSPIRE data specification for the themes cadastral parcels and buildings was also considered during the process of preparation of this Ordinance.

Table 1 presents the types of objects and their attributes in the INSPIRE schema, as well as corresponding types of objects in the Polish EGB application schema. As it turns out from this table, in case of the theme “cadastral parcels” and the Polish model of lands and buildings register data, the types of spatial objects and their attributes, required by INSPIRE, may be automatically generated basing on the register data, acquired according to the conceptual model, included in the ordinance on the lands and buildings register (Ordinance, 2013).

The cadastral data structure (EBG model) is much more developed than the INSPIRE model for the theme “cadastral parcels”. The INSPIRE data model considers specific features of public registers, which are maintained in particular member states of the European Union. Therefore, only basic types of spatial data are determined, which will be made available by all member states. In Poland, due to organisational, legal and economic aspects, creation of INSPIRE data files for the theme “cadastral parcels” should be based on the resources of the central repository of copies of cadastral data file, which will be created within the development of the integrated real estate information system

The importance of the cadastre obliges the country to perform the following activities in this field: – modernisation of the cadastral system with the assurance of AAA (Accurate, Assured, Authoritative).

– development of the multi-task and multi-dimensional cadastre. The developed cadastre should ensure the to law and space, where the extension of property rights is reflected.

– introduction of the ISO 19152 standard, in order to adapt to requirements which must be met by the contemporary, integrated, multi-dimensional and interoperational cadastre.

– integration of cadastral data with other public registers

– introduction of the 4D cadastre, in which registration of data and objects would be performed in real time.

The paper has been prepared within own works financed by InterTIM, ul. Noniewicza 85B/IV, Suwalki, Poland and statutory research works PBS/854/2013 performed by the Faculty of Civil Engineering and Geodesy, Military University of Technology, Warsaw, Poland.

Directive 2007/2/EC of the European Parliament and of the Council of 14 March 2007 establishing an Infrastructure for Spatial Information in the European Community (INSPIRE).