The new IMO Sub Committee on Navigation, Communications Search & Rescue considers the Strategy Implementation Plan for e-Navigation at its meeting in July 2014 (NCSR1). The e-Navigation solutions embodied in that Plan depend on reliable, robust positioning. Requirements for Resilient Positioning Navigation and Timing (PNT) will need to be prepared to support the Strategy Implementation Plan. This article sets out a possible approach to the assessment of systems and combinations of systems. The results of such an assessment could form the basis for discussion and possible submission to IALA and IMO.

IMO Resolution A.1046(27) on the World Wide Radio Navigation System (WWRNS) sets out the requirements for recognition of systems under the WWRNS. This Resolution does not distinguish between single systems that might meet the requirements by themselves and combinations of systems that might meet them together. This paper proposes that in addition to the parameters of availability, accuracy, integrity and continuity set out in A.1046, the limitations of each system should be assessed, such as vulnerability to interference, or restricted coverage. By this means complementary systems could be selected to ensure overall resiliency is provided. This approach of considering the WWRNS as a compendium of systems fits in with the planned development by IMO of a Multi-system Receiver Performance Standard, a generic standard that will cover different systems and combinations of systems – specifying what is required, not how it should be done.

Table 1 summarises the requirements set out in Resolution A.1046:

It is proposed that the table 2 should be completed during system analysis and used to assess single systems and combinations of systems against the requirements, with the additional column recording limitations, so that these can be mitigated by combining with other systems:

It is generally accepted that GNSS (GPS in the short term) will be the primary position and timing source for maritime navigation. The increasing availability of more than one GNSS (GPS, GLONASS, Beidou, Galileo and others) will increase resilience and integrity. However, all these systems share the same failure modes, because they use the same frequency bands and all have very low power signals. Therefore true resilience will only be achieved by the use of complementary, dissimilar systems, such as radar, low frequency, high power terrestrial systems, or autonomous onboard alternatives, such as inertial sensors.

Some of these alternatives can be made available in the short to medium term, in parallel with the expansion of GNSS. Some have been demonstrated to work, but would need lengthy regulatory measures to become generally applicable. Others are likely to require considerable technical development before they can be accepted as practical and economic options for maritime use. For example, eLoran is a proven system, meeting the IMO requirements for harbour and harbour approach (Williams et al, 2013). However, it is not widely deployed at present. Studies have shown that ranging mode (R-mode) on DGPS beacons could provide a backup to GNSS, in areas where coverage of such beacons is good (Johnson et al, 2014). This system has still to undergo practical testing and the necessary regulatory measures have still to be put in place. Absolute positioning using solid-state radar and enhanced radar beacons has been shown to work technically, but the regulatory process needed to implement it would be lengthy (Ward et al, 2014). Options such as inertial sensors require considerable technical development before they have the necessary stability, at acceptable cost, to provide a maritime backup. Other autonomous alternatives such as quantum technologies are at a very early stage of development.

The various combinations of options for achieving resilience would need to take into account the different stages of development, as illustrated in Figure 1. 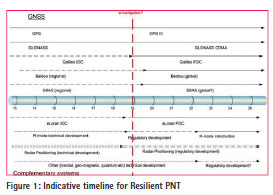 Tables 3 – 10 show assessment results for systems already deployed, near to deployment, or for which technical performance has been demonstrated

– Green indicates that requirements can be met, Red that they cannot. 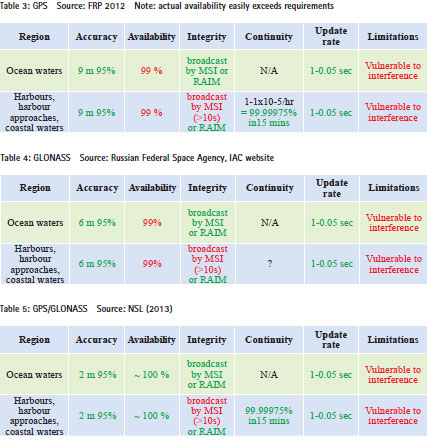 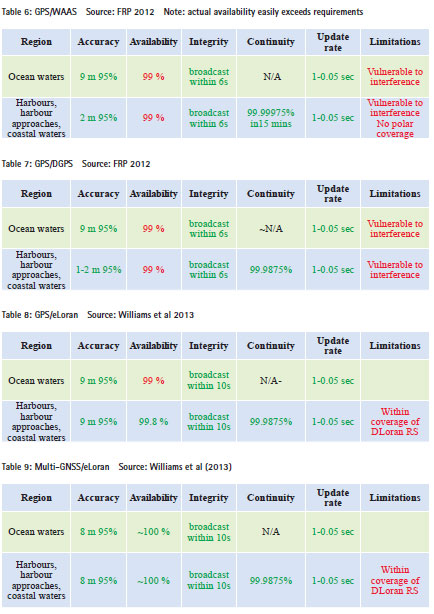 e-Navigation and other concepts for future maritime navigation are totally dependent on reliable positioning. The present situation of reliance on a single system (GPS) is not acceptable for safety critical operations. Other GNSS are becoming available, but they share the same vulnerabilities as GPS, to accidental and deliberate interference. Augmentations, whether space-based or ground-based, increase integrity, but do not provide any protection against loss of the primary system. Complementary, dissimilar systems are needed to achieve real resilience.

This paper attempts to provide an objective approach to the assessment of suitable combinations of systems against the recognised requirements.

It is clear that combinations of more than one GNSS will give significant advantages, particularly in availability. However, these combinations will not overcome the inherent vulnerability to interference. The addition of a dissimilar system, such as eLoran could achieve this in the short term and other options such as R-mode and radar could achieve it in the medium to long term, together with autonomous, onboard options such as inertial, if they meet performance and cost criteria.

The proposed assessment method may be presented for discussion in an appropriate organisation, such as IALA, for possible development into a submission to IMO.

The planned development in IMO of a multi-system receiver performance standard should make the approach of combining different systems a practicable proposition, depending only on which systems are available in any particular location. There would be no need to carry different receivers for different parts of the world, something that would almost certainly be opposed at IMO. It would then be a matter for each administration, according to its obligations under the Safety Of Life At Sea Convention (SOLAS) Regulation V/13 ‘to provide, as it deems practical and necessary either individually or in co-operation with other contracting Governments, such aids to navigation as the volume of traffic justifies and the degree of risk requires’.

Resilient Positioning, Navigation and Timing (PNT) is essential for e-Navigation. An approach has been proposed for the assessment of systems against the requirements for resilient PNT.

The proposed method can assess systems and combinations of systems, allowing the selection of complementary combinations.

Initial assessments indicate that a combination of multiple GNSS and eLoran in coastal waters could meet the requirements. Other candidates, such as radar and R-mode have the potential to provide a backup to GNSS, but still need technical and regulatory development.