The DR sensor which is generally used in car navigation is low-cost and has large noise. Thus the DR sensor navigation solution dramatically diverges without GPS even in short term blockage. In GPS/INS (Inertial Navigation System) Integration system, car aiding measurements are used to solve this problem. The car aiding measurements are restricted car movement, i.e., non-holonomic constraints. The non-holonomic constraints mean that the velocities in vertical and lateral directions are zero if the vehicle does not jump off and slide on the ground. Also, if vehicle moves on the flat road surface, then we assume that roll and pitch angle are zero. Then accelerometer and gyro scope errors can be corrected using vertical/lateral accelerometer and roll/pitch gyro output with zero reference [4-9].

It is impossible to apply the INS non-holonomic constraints to the DR navigation system. Since the DR navigation system consists of only one velocity sensor and rotation sensor. In this paper, we use other car movement information to apply the non-holonomic constraint for DR navigation system. In general, a land vehicle drives on the road and its movement is restricted as stop, straight line and turn. This is an important difference between land vehicle and other vehicles such as airplane and ship. Ideally, if a ground vehicle is driving in a straight line, gyroscope output is zero when gyroscope bias is zero. So the gyroscope bias error can be estimated using this constraint.

In this paper, we propose the GPS/DR integration algorithm for car navigation using vehicle movement information. The odometer and gyroscope are used as DR sensors and a distributed filter approach is employed for the GPS/DR integration. To improve the performance of the integrated GPS-DR navigation system, Car movement is additionally used. Gyro and odometer data was analyzed to determine the current car movement. The heading filter measurement model is appropriately used according to car movement information.

Ideally, odometer and gyroscope output is zero when the car is stopped. The stop area can be determined using this property. The raw odometer measurement is a pulse signal according to the rotation of wheel. For example, our odometer output is 4 pulses per one rotation of wheel. There are differences in true distance and odometer output and generally true distance is equal to or larger than distance from odometer. For this reason, we don’t know exactly when the car is stopped. Thus gyroscope angular rate is used to determine the more precise moment. When car was stopped, gyroscope outputs the zero-mean white Gaussian noise with very small variance. Figure 1 shows the odometer velocity and gyroscope angular (heading) rate when car was stopped. The stopped time is 715 sec from velocity and 716 sec from angular rate. From this figure, car stop moment can be decided more accurately through angular rate. We decide that the car stopped when odometer velocity was equal to zero and gyroscope angular rate was smaller than 0.1 deg/sec. 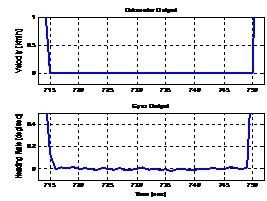 Fig. 1 Velocity and angular rate when car is stopped 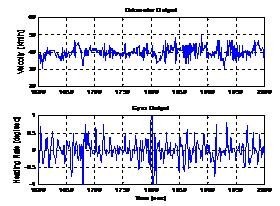 Fig. 2 Velocity and angular rate when car is moving in straight line 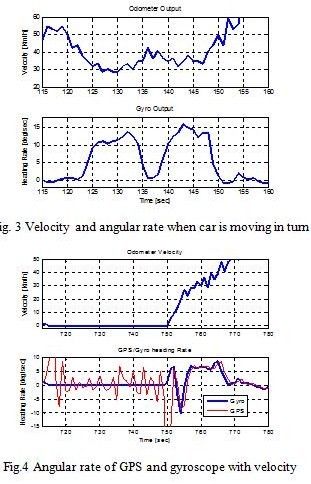 The car movement decision condition is represented in table 1. The changing area covers those cases other than the ones listed and when GPS data is available. In the changing area, we estimate the heading error than bias or scale factor error. 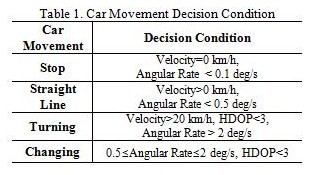 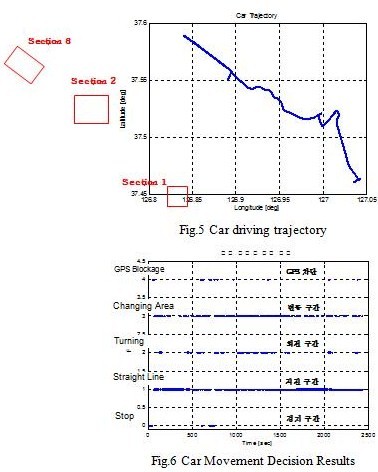 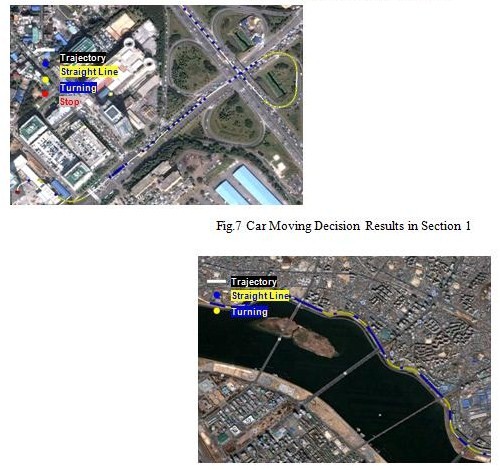 The basic and proposed GPS/DR integration system structure is represented in this section. The integration system designed is based on distributed kalman filter. Each filter model is explained with car movement decision condition.

The integrated GPS/DR navigation system is composed of GPS receiver, odometer and gyroscope to obtain position, velocity and attitude of the vehicle, respectively. Figure 9 shows the block diagram of the basic car navigation system. As figure 9 shows, this system consists of three filters such as the velocity filter, the heading filter, and the position filter. The velocity filter and heading filter estimate the odometer and gyroscope error to correct the raw sensor data. These filter measurements are difference of GPS and DR sensor velocity and heading. The DR navigation algorithm generates the position of the vehicle by using estimates of the speed filter and the heading filter. From this information and GPS position information, the position filter gives an estimated position to the driver [10]. When GPS signal is blocked, DR sensor error cannot be estimated and corrected with this structure. Then position of integration system is diverged as time passes. To solve this problem, additional measurement is needed. In this paper, car movement information is used to correct the DR sensor data. The car movement information has smaller error than GPS heading or velocity in low velocity and straight line area. Figure 10 shows the proposed GPS/DR integration system block diagram. First, the current car movement information is decided using velocity and heading of GPS, odometer and gyroscope. Then heading filter measurement model is changed according to car movement. We can estimate the gyroscope error using this method when GPS signal is blocked or GPS measurement has large error. Each filter structure is explained in the following sections. 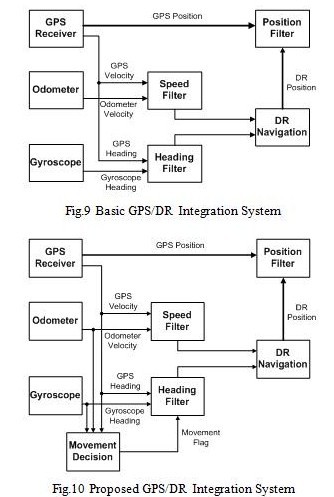 sample mean of output voltage and bias voltage is same. Then first term of equation (1) can be eliminated. In this case, heading error can be a function of bias error. When car is driving with turn, first term of equation (1) increases as heading angle is large. On the other hand, second term is maintained as a constant value. In this paper, three types of measurement models for heading filter are used with relationship between heading error equation and car movement. When car is stopped or driving in straight line, we use the bias error model. We use the scale factor error model if car is turning. Last, when car is driving in changing area, heading error model is used. The following are the heading filter equations 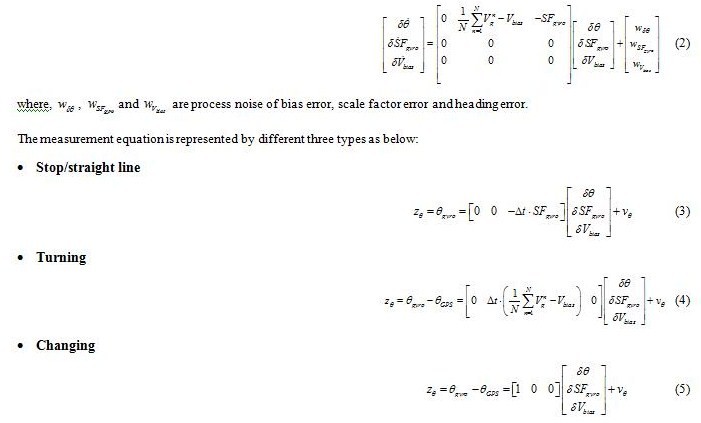 In stop and straight line area, measurement equation is same but we apply the different measurement noise.

The integrated GPS-DR navigation consists of GPS receiver, odometer and gyroscope. The GPS receiver SiRFstarIII GSC3e/LP, which has ARM7TDMI processor of 50MHz and can track 20 GPS channels, is used. As table 2 shows, when the tyre circumference of vehicle is 1.681156m the odometer generates four pulses for one rotation of a tyre. So the scale-factor of odometer is 0.4203. The gyroscope XV-8000CB of EPSON TOYOCOM is also used. The specification of this is shown in Table 3. 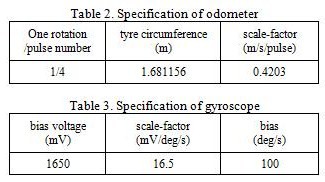 To test the integrated GPS/DR navigation system, we consider the path where GPS signal is available. The figure 1 represents the overall driving trajectory of experiment. The results are analyzed in section 2 and section 3 in Figure 1. The section 2 is turn area and section 3 is straight line area, respectively. In these areas, we assume that GPS signal is blocked and analyze the results to compare with GPS solution. Last, the underground parking test results are shown.

First, we analyze the straight line test results and these are represented in figure 11~14. Figure 11 shows the position result in Google map. In these figures, blue line represents the proposed system result and red line represents the basic system result. The white line means the cars true trajectory is obtained from GPS solution. The estimated position with car movement is more similar with true car trajectory. The position error is shown in figure 12.

Next is turn area results and these are represented in figure 15~17. The proposed system result error is smaller than the basic system. In this case, proposed system error is also increased as time passes. Since bias, scale factor and heading error cannot be estimated in this section.

Finally, proposed system is tested in underground parking. Figure 17 shows estimated position of both systems. The car had been turned several times with same trajectory in underground parking. The proposed system estimated position has more regular trajectory than the basic system. For this reason, we cannot calculate the position and heading error since there are no reference solution. 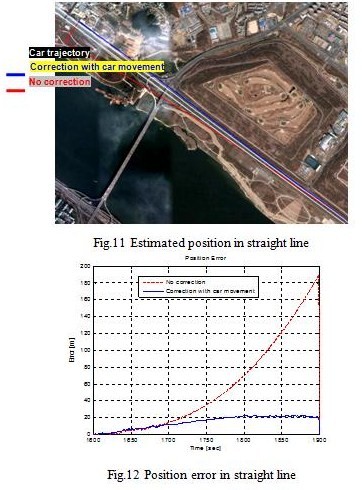 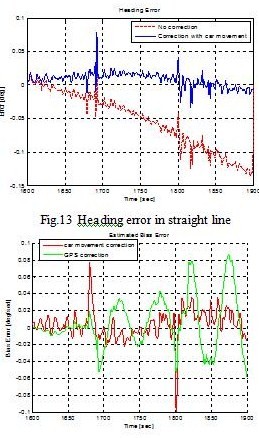 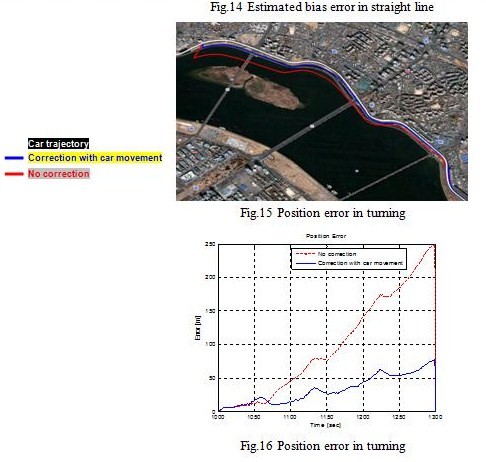 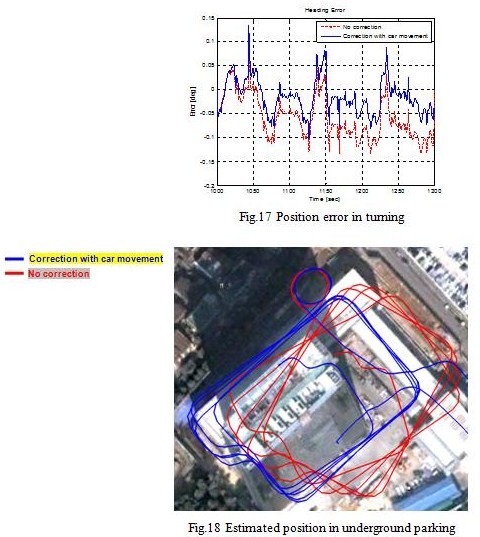 This paper represents the GPS/DR car navigation system using vehicle moving information. GPS and DR sensor measurements are analyzed to decide the car movement. We implement the multi-measurement model for heading filter using this additional information. When GPS signal is blocked, gyroscope bias error is estimated using car movement information. A car experiment was performed to verify the proposed algorithm. The results show that the supposed method provides smaller position and heading error than previous method. When GPS is blocked in 300 sec, the position error is smaller than 9 times in straight line area and 3 times in turning area.

This research was supported by Industrial Strategic Technology Development Program, Development of a Cooperative Vehicle Control System for Accident Prone Areas, funded by the Ministry of Knowledge Economy (MKE, Korea).