A Roadmap for Integrated Rural Development

India is an agrarian country with about 72 per cent (about 80 Crores) of its population in about 5,75,936 villages, the villages are inhibited by the rural poor with agriculture as their predominant occupation.They are largely small and marginal farmers, agricultural labourers, artisansand scheduled castes and scheduled tribes. A large number of rural people (about 30 crore) are still living below the poverty line and often face thebasic problem of survival, viz., jobs, poverty, hunger, shelter, ill-health and disease. By the year 2015, India’s population may surpass that of China.
Dr MS Swaminathan, credited with the ‘Green Revolution’ has warned of a coming famine. The increasing unemployment in the rural sector is likely to have serious ramifi cations on India’s socio-economic and political balance. Today, we often witness serious contradictions – an aeroplane,a sign of progress and power and a bullock cart dragging in a slushy and deeply rutted kaccha road. We can not afford to lose the focus of ruralareas and make them subsevient to the urban life. The hi-tech should beblended with indigenous practices in a manner that it eradicates poverty,disease, inequality and provides basic human needs such as, water, roads,medical care and literacy. Value addition to agro-products is very crucial in this respect. The planned development of rural areas should
envisage provision of ‘urban’ facilities and services, including work centers, agro-industry, hospitals, schools, piped water supply, sanitation, housing, recreational facilities etc., which can be clustered into viable units or ‘citiesin the field’. These can also be the centers of learning of new technologiesof computer, space, telecommunication etc. From the pre-independence era of Mahatama Gandhi, every government after the Independence of the countryin 1947, has committed itself to rural development. The latest being theUPA Government at the centre, which announced a Common Minimum Progress (CMP). According to the Common Minimum Programme of the Government of India (2004),the following are the commitments in respect of rural development: 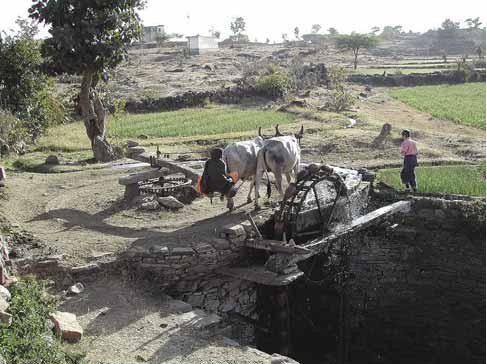 “It will be ensured that all funds given to states for implementation of poverty alleviation and rural development schemes by panchayats are neither delayed nor diverted. Monitoring will be strict. In addition, after consultations with states, the UPA government will consider crediting elected panchayats with such funds directly. Devolution of funds will be accompanied by similar devolution of functions and functionaries as well. Regular elections to panchayat bodies will be ensured and the amended Act in respect of the Fifth and Sixth Schedule Areas will be implemented. The UPA government will ensure that the gram sabha is empowered to emerge as the foundation of panchayati raj.”

“It will be ensured that at least one-thirds of all funds flowing into panchayats are earmarked for programmes for the development of women and children. Village women and their associations will be encouraged to assume responsibility for all development schemes relating to drinking water, sanitation, primary education,
health and nutrition.”

“The highest priority is attached to the development and expansion of physical infrastructure like roads, highways, ports, power, railways, water supply, sewage treatment and sanitation.

“Providing drinking water to all sections in urban and rural areas and augmenting availability of drinking water sources is an issue of the topmost priority.Harvesting rainwater, desilting existing ponds and other innovative mechanisms will be adopted.” The Central Government has recently announced a new Twenty
Point Programme (TPP-2004), which overlaps the provisions of rural amenities and services. The salient programmes of the Central Government under each head are given below:

• Safe Drinking Water by 2004 for all villages. 87.9% villages fully covered and 10.9% partially covered so far. Sector
Reforms in 62 pilot districts with an outlay of Rs.1800 crore is under implementation.
• Shudh Peya Jal (Twenty Point Programme – 2004) : Providing drinking water to all and augmenting availability of drinking water sources is an issue of the topmost priority. Harvesting rain water, desilting existing ponds and other innovative mechanisms are to be taken up and monitored.

• Pradhan Mantri Gram Sadak Yojana providing on all weather road to all rural Habitations with a population of 500 by 2007.21,000 projects already taken up.
• Rural Infrastructure Development fund (RIDF) corpus with NABARD for creating infrastructure in rural areas
increased to Rs.5000 crores.

• Community Development Programme (CDP) was launched in 1952 to establish an appropriate data base for village development plans and programmes to improve village community life. 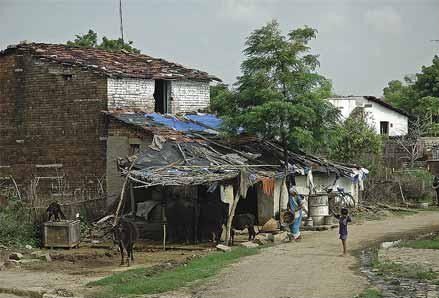 • Conducting of timely Panchayat Election
• Devolution of funds and functions
• Transfer of functionaries to Panchayats for local administration
• Kriyasheel Prashaasan (TPP-2004): The programme – Kriyasheel Prashaasan aims at improving governance and responsiveness of the public administration, covering items like simplification of procedure, delegation of authority, enforcement of accountability, Redressal of Public Grievances, and Transparency in decision making,
Development of Technology for e-Governance, versatile on-line information system for citizens, civic administration and municipalcorporation, Development and upgradation of website of Ministries and State Governments.
• Sheeghra Nyay Prakriya (TPP-2004) : To expedite disposal of court cases the Sheeghra Nyay Pakriya programme has been launched for monitoring the pendency of court cases and expansion of legal aid services.

In spite of numerous laudable programmes and huge investments, the reality of rural livelihood is rather dismal. There is a continuous distress migration to the cities and most of the villages lack the basic amenities
and services, like a pucca road, transport, communications, drinking water supply, power, sanitation, health
center, irrigation facility and jobs for survival and sustenance. The power is concentrated in the hands of few and the village administration is by and large urban-centred. The concepts of citizen empowerment, participatory governance and decentralization are often confined to the seminars and papers. The decision-making is often piecemeal, disjointed, ad-hoc, motivated and lacks an overall perspective. A lion’s share of subsidies is eaten up by the administration/establishment structure and their salaries. The programmes
are too many, so are the departments involved in each one of them. There is often overlapping and lack of clarity about the organizations and their accountability. The programmes too often exceed the time and fi nancial allocations and the facilities including housing built up by the government
bodies have often remain unoccupied. This leads us to identifi cation of the
pertinent issues involved in rural development, as given below:

• Lack of clear goals, objectives and targets
• Lack of benchmark and quantifiable standards
• Abstract and disjointed programmes without a coordinated spatial dimension
• Lack of strategic interventions and time frame
• Gap between plans/programmes and implementation
• Urban Centred, Multi-layered and multi-tiered rural administration and lack of accountability
• Complex procedures and obsolete legal frame
• Lack of funds, bulk of expenditure booked for establishment and salaries

• Evolving Smart Targets (Specific,Measureable, Action-oriented,Realistic and Timely)
• Setting up the Benchmarks for amenities and services
• Preparation of the development plans at policy, strategic and operational levels, and exploring a need based approach for clustered hierarchy of facilities
• Strategic planning for priority projects, areas and sectors in a timeframe
• Action Planning and participatory management
• Institutional/organization framework/Governance
• Legal framework and procedural reforms
• Financial Planning and harnessing the potential of private and community sectors Planning of the Rural Areas
is essentially comprised the following levels:
1. Policy Goals
2. Strategic objectives
3. Action Plans
4. Projects
So that all these fit into a comprehensive frame-work, a matrix structure can be developed relating the above with the following:
(a) Focus Areas/Priority Sector, based on the characteristics and potential of a particular region/district/village.
(b) Benchmarking of standards, levels and norms
(c) Time Frame for achieving the targets/accomplishing the activity
(d) Key organization/departments responsible
(e) Financial resources
(f) Monitoring and Feedback system

Towards a need based approach

Participatory learning with the target groups provides useful clues towards adopting a ‘needs based approach’. The needs of the rural population can be categorized in the following priorities:
1. Survival: Freedom from hunger and malnutrition, food security, agriculture and employment, credit facility
2. Supportive: Shelter, drinking water supply, power, transport, sanitation etc.
3. Transformational: Education, literacy, skill development, environmental upgradation and access to information.
4. Empowerment: Equal access to resources, including land, finance and services, justice, participation in decision making, etc. It is observed that with a little external support, the rural poor are often capable of meeting their survival needs. The organized sector has a vital role in helping the rural poor in meeting these needs. The experience indicates that the supportive needsreally help the rural poor in climbing up the economic ladder. The provision of basic services and facilities in the rural context is a major concern. As
such the rural amenities and services be grouped under the above heads and the priorities of planning, development and investments can be worked out.
Based on participatory rural learning, the viable distances for these amenities and facilities can also be worked out (which will vary according to public transport facility, topography and characteristics of potential areas). This leads us to a system of clustering of the facilities into a conceptual hierarchy of rural settlements (such as ‘cities in green field’, rurban centers, growth centers etc.) which can be developed
according to the potential of either the existing settlement or as the new areas.

Keeping in view the above approach, the following steps are necessary in the process of rural planning:
1. Mission Statement and Objectives (mainly derived from 11th schedule, Article 243 G and 20 Point Programme-2004)
2. Translating the above into regionwise SMART Goals and Targets (specific, measureable, Action-oriented,
Realistic and Timely).
3. Baseline Information and participatory learning at District, Taluk and village settlement levels
4. Identifying the issues and Key Action Areas
5. Conceptual Framework with respect to Policy Option, Strategic planning, Benchmarks and Standards
6. Evaluation of planning options, by SWOT Analysis, financial implications, cost benefit analysis, feasibility and viability assessment.
7. Development of Plans at District,Taluk and settlement levels, strategies of development, disaggregated into sectoral plans for various amenities & services.
8. Resource Planning and Governance:
• Shared Governance and Decentralisation
• Identifying key issues vis-àvis Resource assessment
• Empowerment of the community.
• Participatory Action Planning Implementation Planning
• Matrix structure for integrated implementation
• GIS/MIS, computerisation, information sharing and participatory monitoring
• Capacity building and networking
• Legal, institutional and financial framework.
The entire superstructure of rural planning and development
rests on the three pillars of-
– Organisation/institutional structure
– Finance
– Legal Frame
No plan, however good, can be implemented unless it is supported by the people and stakeholders, who
have to participate at all levels of decision making and implementation.

The Government with its avowed commitment to rural development has resorted to the conventional
“programme” approach, which has serious shortcomings in achieving its objectives and has the danger of
reducing the laudable mandate into mere exhortations. It is time that a more professional, participatory planning approach is evolved, which should be accompanied by supportive governance, organization/administrative structure, fiscal and legal/procedural reforms to induce a holistic approach towards the development of the rural areas.