VGS based framework for disaster response

In the wake of growing number of disasters happening across the world, it is essential to make our society more flexible and resilient to disasters by managing crisis-related information more opportunely. To achieve this goal, Volunteered Geographic Information (VGI) which is created and disseminated by the crowd could be employed as a significant source of information for decision making (Horita, Sp, & Zipf, 2013). In fact, VGI is spatial data produced by ordinary citizens using everyday tools like web browsers and mobile applications, and transferred via Internet (Goodchild, 2007). Not only VGI can be used as a precious piece of information, but also Volunteered Geographic Services (VGS), a framework proposed by Savelyev et al. (2011), which turns information to actions could be leveraged to respond to a disaster timely and more appropriately.

Savelyev et al. (2011) has highlighted that despite the role of volunteers in data collection processes, actions are taken by authoritative agencies such as firefighters, emergency teams and so on. Unfortunately, volunteers have no role in disaster response services to speed up the whole ongoing rescue and aid processes. Thatcher (2013) has argued that current VGI-based disaster response platforms such as Ushahidi have a ‘top-down’ approach because information is gathered by volunteers for disaster response organizations while they are not allowed to participate directly in decision making processes.

Addressing the abovementioned issue, Savelyev et al. (2011) have suggested Volunteered Geographic Services (VGS) which is one step beyond the VGI and intends to motivate general public to participate in response operations along with responsible disaster response agencies. VGS intends to enable ordinary citizens with a smartphone not only to collect information but also to work as respondents to a disaster.

Timely distribution of help requests among volunteers could lead to better disaster responses. Since VGS-based platform does not follow top-down structure of many VGI-based disaster response platforms and it does not inherit their related limitations, it could be more timely and efficient. Thus, this paper introduces a new framework to utilise VGS for identifying and distributing potential help requests as volunteered services in an automatic and proactive way among potential volunteers in situ right after a disaster. In addition, based on the proposed framework, a mobile application is developed which is presented in this paper.

Volunteered Geographic Information is used to automatically locate people based on the information they have provided. Figure 1 illustrates proposed framework which employs both VGI and VGS. When a disaster happens, location information will be used to gather status of the people in the impacted areas. Then, this collected information will be employed to create VGS packages which are disseminated to the people in the impacted areas to motivate potential volunteers. Potential volunteers as service providers could use these VGS packages to decide about their participation in disaster response activities in a bottomup manner without interference of the authoritative organizations in a very short period of time immediately after a disaster strikes. In doing so, the response and rescue processes will speed up. In addition, these volunteers could also be employed in data collection processes through VGI. This collected information including geotagged photos, geo-tagged information about the incident, etc. could be used by government agencies to increase situational awareness of the first respondents. 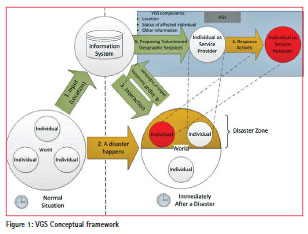 In order to develop a mobile application based on the proposed framework, the interaction design model proposed by Sharp et al. (2007) was used. This interaction design model suggests multi iterations of requirement analysis, design, interactive interface building and evaluation in order to achieve a final product. The requirement analysis of application was done through investigating the literature. Since Rudd et al. (1996) argue that a high-fidelity prototype demonstrates complete functionality of a user interface, it was employed to get more useful feedback from experts. Several iterations of redesign process were performed to achieve all usability goals (functionality) of the product. Finally, Cognitive Walkthrough method (Wharton et al.,1994) was used for evaluation in this stage.

Based on the proposed framework, a mobile application named DisasterSaver is designed and developed. The App can work in two modes as shown on Figure 2. One mode tracks the users in the background and consequently collects geo-location of the user using device’s GPS. The other mode is designed to satisfy users’ concerns about privacy issue by not collecting geo-location. Instead, user determines some points of interest.

When a disaster like an earthquake happens, server backbone of the app is notified about the incident, its location, impacted areas and other features. Then, server finds all the users in the proximity of the incident and notifies them about it. This notification also asks users in the impacted areas if they need help. Then, depending on responses, a user could have three statuses which are ‘Help needed’, ‘No help’ and ‘Unanswered (Unknown)’.

System automatically starts to collect location information of users with ‘Help needed’ and ‘Unanswered’ statuses. This information is used later by emergency response agencies or by VGS. If a user has a ‘No help’ status, system motivates that user to collect VGI or help others through VGS. These users could help to collect geo-tagged information about the incident or start helping others, who have ‘help needed’ or ‘unanswered’ status, in situ. Users who are in the impacted areas but do not need help, could help others via two different options:

I. Informing about incident by answering some questions about the incident or sending geo-tagged photos.

II. Attempting to help close-by affected people in situ whose statuses are “help needed” by checking their locations using the App.

In addition to these two main options, volunteers could also participate in response processes via collecting information about users whose statuses are “unknown” by calling their emergency numbers and then updating this information about them. Figure 3 shows some snapshots of DisasterSaver interface. 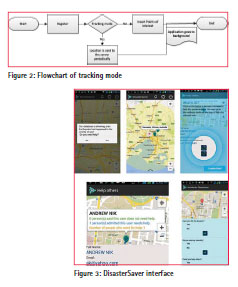 This system has a server side backbone and client side mobile app. Also, Google cloud solution has been used for messaging between mobile application and the server along with ordinary HTTP connections on the Internet. Google Cloud provides this application with a reliable medium for messaging and connection. This system is fed by External databases as authoritative and reliable resources which disseminate timely information about occurrence of major disasters such as National Earthquake Information Centre (NEIC) for earthquake in USA.

Undoubtedly, the location of affected people in the impacted areas is one of the most important pieces of information which is required in disaster management. This location data enables VGS to be employed. Gathering location information of the users via GPS before any occurrence of a disaster could be a hindrance for using the mobile applications since users may find it against their privacy. However, during a disaster, gathering location information of individuals is more acceptable for people since they are in a crisis situation. Instead of gathering precise locations of users before a disaster, they could determine some points of interests like their homes and work offices. 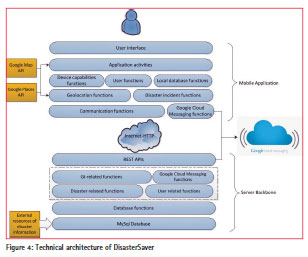 In the architecture of DisasterSaver (Figure 4), server is responsible to send and receive information to/from mobile app, perform geometric calculations and communicate with external resources and Google Cloud Messaging (GCM). All these services are available to the mobile app as front-end via REST API. REST API uses HTTP (Hypertext Transfer Protocol) protocol to transfer information over the network and it complies with some architectural principles. Server has been implemented using PHP as server side programming language. As soon as a record of disaster incident is added to the database, server finds all points of interests or users which fall inside the boundaries of the incident by doing geometric calculation. Then notifications are sent through Google Cloud Messaging (GCM) to the users. GCM for Android is a service that allows server-to-client communication as an alternative to traditional client-to-server connection using IP (Internet Protocol) addresses. In other words, GCM enables a server to contact a mobile device when it is needed.

Although it is believed that the proposed framework and its implementation in the developed mobile application will extensively help disaster management in response phase, there are a number of limitations that need to be considered. One limitation of DisasterSaver is due to accuracy of mobile GPS data. With all enhancements happened in positioning systems such as GPS, their location accuracy differs in different devices and different situations. This lack of precision becomes more critical in indoor environments and multi-storey buildings.

One other limitation is concerned with off-line condition of GPS. As Google policy does not allow enabling GPS programmatically and without user’s approval due to privacy concerns, in a case that an affected individual has a mobile phone with disabled GPS and is unable to have access to his/her mobile phone because of some reasons like being stuck or unconscious right after a disaster, collecting location information becomes impossible.

As other limitations, difficulty and lack of tendency in using mobile devices in the middle of a disaster, resilience of communication infrastructure against natural disasters, validity and integrity of crowd-sourced information in Volunteered Geographic Services and safety of volunteers while helping others through a non-authoritative system could be also mentioned.

In this research, a new framework and a prototype system are introduced to leverage VGI for enabling VGS in order to help disaster management in response phase. Based on the proposed framework, a mobile application is designed and implemented which attempts to enable society to be involved in response phase of disaster management process alongside public and private disaster management agencies. This mobile app identifies affected people in the impacted areas, at first. In the second step, it harnesses the immediate availability of the people in situ to speed up response processes by providing potential interested volunteers in relevant proximity of disaster with required information about potential affected individuals. Hence, it provides a systematic intelligent mechanism for connecting help services and help needs.