Normally, up-to-dateness in land administration is understood as occurring between land information system establishment and maintenance phases. Donors who fund land-related projects in developing countries tend to be projectoriented. The establishment of a land information system fits comfortably with this management approach – a project team can be created and managed until completion with a fixed amount of resources. System maintenance is less amenable – ongoing resources, impetus and skills are required. For these reasons, many establishment efforts are an initial success, yet many attempts fail in the end as they do not adequately consider the issues of up-to-dateness after the project is accomplished. In this view, it is believed that understanding up-to-dateness in land administration science will contribute to fit-for-purpose maintenance regimes design for land information system.

A research synthesis is for analyzing and organizing literatures (Hart, 1999). Based on the problem formulated, the qualitative study involved literature selection, analysis, and presentation of results (i.e., synthesis modeling) (Cooper, 1998). This methodology was adopted to identify, compare and re-evaluate various interpretations of up-to-dateness among land administration theories.

Based on this philosophy, the synthesis process was implemented. Firstly, the selection process used prescribed channels – textbooks, journals, conference proceedings and publications of authorized organizations. Search terms included: updating, upgrading, dynamism, changes, renewal, maintenance and evolvement. These terms were considered to be covered by up-todateness in land administration. Then, categorization and analysis ensued. In the end, a synthesis model was established to present a holistic view of up-to- dateness in land administration.

This section attempts to synthesize all the existing interpretations of up-to-dateness in land administration. As discussed, LMP was the chosen model to classify these various interpretations. LMP is shown in Figure 1.

Seen from Figure 1, LMP consists of five components – sustainable development, land policy, land administration functions, land information infrastructures and country context. A wide range of literatures reveal that up-to-dateness occurs in any component of LMP. Up-to- dateness of each component can be equally understood as its dynamism with temporality. This temporality can be appropriately analyzed through EIM, as shown in Figure 2.

This well-known EIM suggests that institutional changes occur in four hierarchical epochs of time in the unit of a year. They are successively 102– 103 (social theory), 10-102 (economics of property rights/positive political theory), 1-10 (transaction cost economics) and continuous (neoclassical economics/agency theory). This temporal hierarchy is applied to analyze upto- dateness in land administration.

Prior to holistic synthesis, Dynamic Land Administration System (DLAS) is worth mentioning, as shown in Table 1.

However, we still argue a more holistic synthesis, based on pre-existing theories. That is, to provide a more complete view of up-todateness in land administration. Accordingly, the following starts this synthesis through the lens of embedding LMP into EIM. 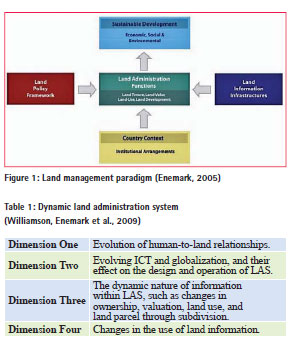 Institutions should constantly evolve themselves due to the requirements of the community for becoming open, transparent and effective (Williamson, Grant, 1999), for better supporting land policies and good governance implementation (Enemark, Williamson et al., 2005) and as the key of understanding historical change due to shaping the way of societal evolvement (North, 1990). Institutions change incrementally, rather than discontinuously as a consequence of changes in rules, constraints and enforcement (North, 1990). Institutional changes or evolvement presents the significance of country context up-to-dateness. 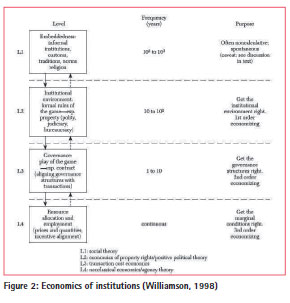 Seen from figure 3, a specific focus on land administration evolvement through western context specifically reflects into: 1) attitudes towards land shift: from wealth, commodity, and scarce resource to scarce community resource; 2) cadastral functions shift: from record, fiscal, land market, planning to multi-purpose. All these occurred fundamentally as a result from country context changes. All these evolvements match the epochs of time from up to late 1700’s, late 1700’s to WW II, post WW II & postwar reconstruction, to 1980’s onwards. In Figure 2, epoch of time (102-103 years) could be preliminarily shown. 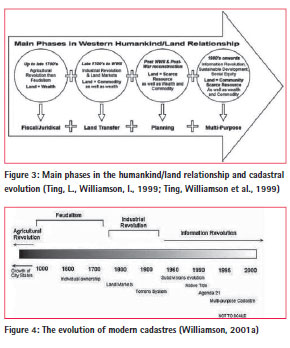 The overarching aim underpins modern land administration design. Land administration design closely depends on the societal requirements in the country context. As such, epoch of time of this evolvement is argued to keep the same pace of country context. That is, its epoch of time is believed to fit into level 1 (102-103 years) of EIM. Land policy Land policy needs updating. Three cases can show the necessity of land policy upto- dateness: ‘land reform policy’ published in world bank in 1975 should be updated considering changes of requirements of title types and land market efficiency after years (Deinlnger, Binswanger, 1999); China’s land policy since 1978 has changed dramatically in response to land allocation systems adjustment (Ding, 2003); Chinese cultivated land use changes between 1999 and 2007 resulted in policy changes and evolving (Song, Ouyang et al., 2012). The above mentioned cases could also imply that the epoch of time for land policy up-to-dateness is decades of time.

Land policy up-to-dateness fits into level 2 (10-102 year) of EIM. From figure 5, we can see that land policy evolves keeping pace with economic, environmental, social, governmental and informatics development, for purposes of building instruments, building markets, supporting development and driving development. The temporal span is respectively from the Second World War, the year of 1975, 1990, and 2003 to 2010. As such, figure 5 provides a clear picture and proves that land policy evolvement is in 10-102 years. 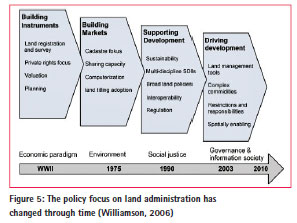 The findings of this study can be shown in Figure 8: 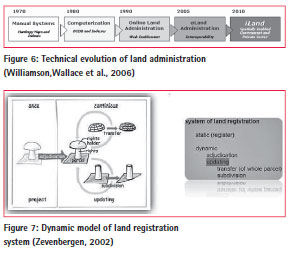 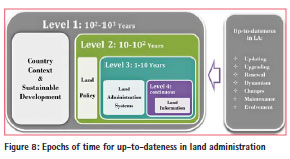 Through mastering principles on epoch of time for country context up-to-dateness, institutional reform could be exactly predicted and relevant preparations could be made well in advance; Through epoch of time for sustainable development up-to-dateness, the vision or overarching aim of land administration could be foreseen, and this will ultimately contribute to state development and stability due to considering the changing societal real requirements;

Through epoch of time for land policy up-to-dateness, proactive and reasonable land policy initiatives could be made by politicians;

Despite the main findings and further implications, the limitations of this study are worth mentioning: firstly, classification of LMP is probably limited – whether there is other components of land administration need probing or supplementing; secondly, hierarchies of EIM could be further reconsidered – whether the four levels need subdivision; thirdly, the synthesis model still needs further supplementing based on detailing epoch of time and supplementing components of land administration; fourthly, whether up-todateness of each component with certain epochs of time should be re-organized or not need reconsidering based on limited literatures. All in all, due to the limitations of LMP, EIM, limited literatures and inevitable environmental changes, the synthesis model itself still needs continuously updating in future. Yet, the synthesis model in this paper is accurate and complete in the present moment.

This synthesis model is a starting point for initiating research on up-to-dateness from temporal perspective in land administration science. What is the proper epoch of time for up-to- dateness of each component and how to evaluate the fitness-for-purpose of the current epoch of time could be the interesting directions for further probing.

Bennett, R., Rajabifard, A., Kalantari, M., Wallace, J., & Williamson, I. (2010). Cadastral futures: building a new vision for the nature and role of cadastres.

Williamson, I. (1990). Why cadastral reform? Paper presented at the National Conference on Cadastral Reform.

Williamson, I. (2001a). The evolution of modern cadastres. Paper presented at the Proceedings of New Technology for a New Century Conference, FWW2001, Seoul, South Korea.

Williamson, I. (2006). Global challenges for land administration and sustainable development. Invited paper for ‘Towards a, 2015.

Williamson, I., & Grant, D. (1999). United Nations–FIG Bathurst Declaration on Land Administration for Sustainable Development: Development and Impact. Paper presented at the Presented as a background paper for a Workshop at an International Conference in Melbourne, Australia.