Malaysia is a maritime country with two primary land masses, Peninsular Malaysia and East Malaysia. The country has a total land mass of approximately 330,000 sq km and 4492 km of coastlines. These land masses support a population of 25 million (Chee Hai Teo and Ahmad Fauzi, 2009). Malaysia lies close to the equator between latitudes 10 and 70 North and Longitudes 1000 and 1190 East.

The exploration, exploitation, conservation and management of marine resources within Peninsular Malaysia, Sabah and Sarawak depend on the available maritime jurisdictions which are shared in various ways including by the state government, federal departments and United Nations Convention on the Law of the Sea (UNCLOS). Although there are no specific legal actions approved related to marine cadastral, but there are a lot of activities related to the right of marine space usage that has been carried out by relevant bodies. General scenario of Malaysian involvement in marine parcel’s right, restriction and responsibility are highlighted in this paper. 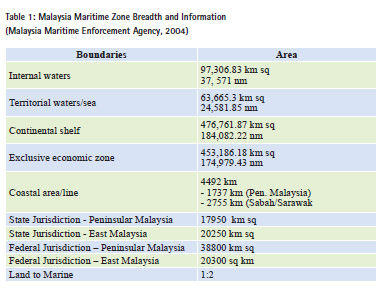 In order to fully understand about the marine cadastre, we must look the Malaysian background on maritime legal and its history. The United Nations Convention on the Law of the Sea (UNCLOS) establishes a jurisdictional regime under which Malaysia itself can claim, manage and utilize its maritime territories (United Nations, 1982). Under the legal provision, Malaysia forwards its claim as mentioned in table 1.

There are currently 23 institutions in Malaysia that are involved in the issue of right, responsibility and restriction in the marine area. The full list is given in Appendix A.

Jurisdiction and Authority between Federal and State of Malaysia

As a maritime country, Malaysia has exercised its domestic marine law and adopted international law for the implementation of the nation’s maritime policies and boundaries. Malaysia has about 94 domestic laws pertaining to maritime matters and as the solution to cover in diverse matters and maritime issues. As a member of Commonwealth and United Nations, Malaysia has agreed to the rules and regulations under Law of the Sea (Amy Ai, 2011). Malaysia is engaged in all four Laws of the Sea Convention of 1958 and signatory to the 1982 LOS Convention newly ratified on October 14, 1996. The pertaining laws are listed in Appendix B.

Emergency (Essential Powers) Ordinance, 1969 declares and delimits parts of Malaysia’s territorial sea up to 12 nautical miles. However, the marine governance in Malaysia, through the jurisdiction over marine spaces and management responsibilities, are also split between the State and Federal Governments. As a result, the State Jurisdiction covers for Coastal Waters/Area from declaration of baseline until 3nm offshore, whilst the Federal Jurisdiction covers the Territorial Waters from 3 nm to 12nm off shore until EEZ.

This ordinance is an important legal factor as a reference to determination of the power between the State and Federal of Malaysia. This ordinance was promulgated in 1969 by the Yang Dipertuan Agong under Article 150 (2) of the Federal Constitution on May 15, 1969, and under special emergency powers in context with the political development at the time. The reason for declaring a state of emergency was connected with the political instability after the so-called May 13 incident, 3 months prior to the promulgation of Ordinance No. 7. The Malaysian Parliament had been dissolved on March 20, 1969 in anticipation of a general election to be held on May 10, 1969. On May 13, racial riots broke out and 2 days later, the state of emergency was declared under Article 150 of the Malaysian Constitution.

According to the preamble of Ordinance 7, the Yang Dipertuan Agong was satisfied at the time that immediate action was required to promulgate the delimitation of the territorial waters of Malaysia. Urgency was imperative not only for the petroleum sector, but also due to the imminent conclusion of a treaty with Indonesia with regard to delimitation of the continental shelf between both countries. Due to the existence of a grave emergency threatening the security of Malaysia, the Proclamation of Emergency was issued. Whereas the Yang Dipertuan Agong is satisfied that immediate action is required for securing public safety, the defense of Malaysia, the maintenance of public order and of supplies and services essential to community life (Haller-Trost,1996).

Malaysian land-based legal issue is mainly referred to the National Land Code, 1965 under the title Land Cadastre System. Unfortunately, the execution of this land system is less relevant with maritime environment, particularly to the issues of marine cadastre implementation.

Marine cadastre implementation concept in Malaysia is currently in the development process. Hence, a working group is established with collaboration of local universities particularly with UiTM, UTM and with the Malaysian Directorate of Survey Office. Fundamentally it has been agreed upon that marine space is for universal use and separated into various columns that have a specific reference point, line or polygon. There are spaces which can be allocated for individual, public and for reserve. Sea space is a dynamic platform and the phenomenon is very different from ground. Hence, the concept of giving right, responsibility and restriction to marine space differs from land, although these are common in many aspects. 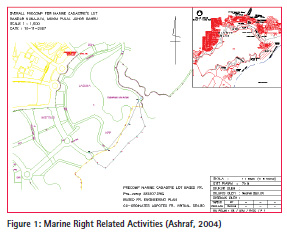 A marine cadastre is a 3D marine parcel administration system with respect to the legal and systematic technical arrangement of marine spatial rights, restrictions and responsibilities for marine space activities (Ashraf et al., 2013).

According to Ashraf (2004), there are four major differences of perspective between marine cadastre and ordinary Malaysian cadastre namely:

i) Marine Cadastre is regarding marine spatial information and it leans more towards marine and coastal parcel. Whereas ordinary cadastre is a land registry system in which the land is registered under ownership document and this ownership is tradable. This system is also known as Torrens system and it is being applied and used in Peninsular Malaysia.

ii) Ordinary Cadastre and Marine Cadastre have the most significant difference in marking point of boundary and border. This is odd in the sea environment while is normal to the situation on land. Marine Cadastre uses virtual point based on chart coordinates or its picturesque natural environment.

iii) Marine Cadastre has a different kind of assumption or standard in the application of administration and development of rights, limitations and responsibilities in the sea land area as compared to the land area due to ocean dynamics.

iv) Marine Cadastre ownership right is fundamentally for everyone to share but Ordinary Cadastre gives the ultimate right.

S. Saad and A. H. Omar (2012), in their study on marine cadastre spatial data, have used GIS to develop marine cadastre infrastructure which consists of topographic maps, nautical charts and aerial photographs. The study has provided a methodology and descriptive document on the development of marine data infrastructure which includes physical element, condition and the suggested acceptance standard for future development for a sustainable environment. 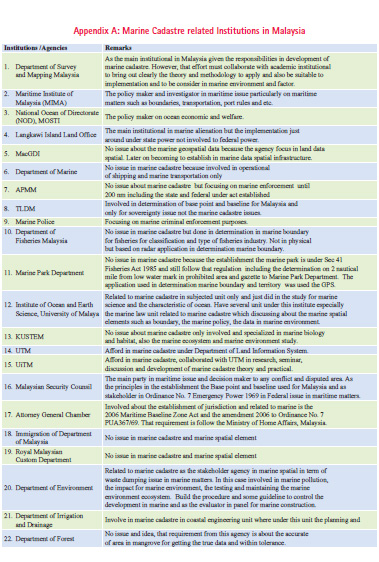 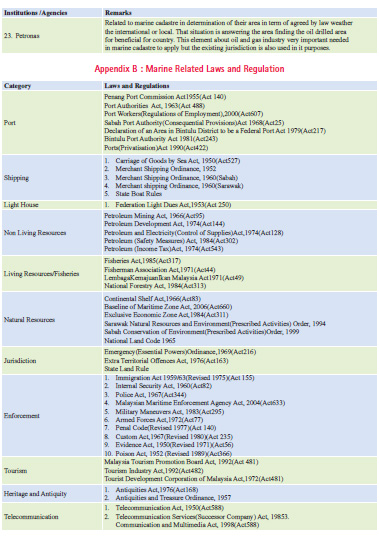 Although there is no specific marine title in the marine area but the current practice of marine alienation follows almost the same procedure as applied on land, with a minor difference such as:

• The applicant must comply with the conditions imposed by the Land Office according to the stated marine space management vision.

• The application is open to the applicant with a proper development plan to the selected marine space, willing to invest in marine activities and the plan will bring benefit to the state.

Until now, the application of marine space right is within the state authority and can be practised within the limit of state boundary’s right, endorsed by Malaysian legal documents. Projects of fish cages, cockle areas, ocean recreation areas, ownership of the island and surrounding waters are some common activities applied and granted through Temporary Occupation Licence (TOL), that requires a licence and needs to be renewed annually. However, there are cases of right which were given a Qualified Title to benefit the applicant for a long period as agreed.

Other projects which involve marine navigation right, environment, security, economic and transportation rights are currently handled by federal institutions and not seriously taken by the State Authority. This is due to lack of legal support documents to exercise their optimum right in addition to the high cost of management. Currently, there are 14 identified ministries that are responsible for the management of maritime related activities in Malaysia. The responsibility of each ministry sometimes overlaps with the functions and objectives of other ministries (MIMA, 2011). Figure 2.0 highlighted a sample project carried out in the seashore area and were given the appropriate right by local authority.

Marine cadastre is about the right, restriction and responsibilities of stakeholder to any marine parcel. Although the concept of giving right to any parcel is about the same, but there are differences between marine parcel and land parcel’s right due to each unique phenomena which contributes to the differences of approach in applying the cadastre concept. Recently the concept and procedure used in Malaysian Land Administrative system of NLC for land system was directly or indirectly used in giving such a right to the marine parcel. Although it was found that the approach was not that appropriate, but the only complete procedure of the cadastre system implementation in Malaysia was given in the NLC. It was found that the existence of various marine legal in the country was irrelevant to the need and their existence was probably designed for empowerment of duty. Malaysia is currently active in defining the concept and conceptualizing the idea to exercise the procedure of giving right to the marine parcel. The approach of implementing the concept has been taken since 2010 and has produced some implementation models. However, it was found that the detail of each component in the model needs further elaboration and improvements. The maritime sector is now recognized as a critical sector which contributes significantly to the Malaysian economy. Being a littoral state, the economic activity of the country is dependent to a large extent on the ability to manage its marine resources. Hence, the need for an amendment of the law and use of great technology are important actions and must be taken to ensure the implementation of a proper marine cadastre concept and make it a reality. Few researchers such as S. Shabudin, (2012), observed that the existing law in practice was weak to govern marine parcel’s right, responsibility and restriction enforcement. It was clear that a new marine parcel management law was ultimately necessary with due respect to the concept of power separation in practice between federal and the states.

Juita Ramli (1999.)A New Maritime Legal Regime for Malaysia Within the Context of Ocean Governance Centre for Ocean Law and Policy,Maritime Institute of Malaysia Haller, R. T. (1996). Some Comments on the Territorial Sea and Continental Shelf map of Malaysia. In Elisabeth, M. B., Norton,G. and Joseph, R. M. (Eds.) Ocean Yearbook 12 (p.p 316- 333). USA: The University of Chicago.