Congratulations for the successful launch of Galileo IOV Satellites. How satisfi ed you are with the progress of Galileo program?

Indeed, the successful launch of two Galileo satellites on 21 October 2011 from French Guyana was a key step for the programme. Galileo is now becoming a reality and I am really proud of it. The EU, with its partners, in particular the European Space Agency, has demonstrated its ability to manage such a large scale programme. We are reaping the fruits of our continuous efforts. The programme is under control both on programmatic and fi nancial levels and it is now possible to accelerate the deployment of the constellation of satellites. That is why I have decided to buy additional satellites.

The priority for Galileo is now to achieve initial operational capability with at least 18 satellites in orbit by 2014. This will allow offering fi rst services: the open service and the European participation in the international search and rescue service. First demonstrators for the public regulated service for government-authorised users will also be made possible at that time. Benefi ts to satellite navigation users around the globe will become tangible.

The Commission is fully backing the programme with its proposal for the period 2014-2020, released on 30 November. This proposal provides for a stable and long-term fi nancing of 7 billions EUR and new governance arrangements. This will allow for the completion of the Galileo infrastructure and the management of the programme in its operational phase. The programme is defi nitely on the right track.

Recently in Munich Satellite Summit, the European Commission spoke about linking of space initiatives to the political identity. Would you like to elaborate on this?

Space policy is an instrument serving the Union’s internal and external policies. We all use space based applications throughout our daily lives. Galileo, EGNOS and GMES are part of the EU Space Policy. The EU invests in space for the benefi t of the citizens. It also supports the EU as a global economic power. Clearly, space is part of our identity. This is recognized by the recent Lisbon Treaty which confi rmed the important role for the EU in space matters. It allows also the EU to intensify cooperation and partnerships with other space faring nations. Space should serve to cement the EU’s position as a major player on the international stage.

With its space policy, the EU tries to address a combination of social, economic and strategic needs. Space applications provide us with the information and tools to improve our policies and their implementation. Space plays a role in many domains, such as environment, combating climate change, improving transport safety, or public security, emergency management, etc. The list is long. Many of these applications directly impact the wellbeing and security of our citizens. Space brings a potentially huge added value to the European economy. It is a powerful driver for innovation and contributes to competitiveness, growth and job creation. Last but not least, EU space policy contributes to the Union’s economic and political independence.

Where do Galileo and GMES fit in EU space policy?

Galileo, EGNOS and GMES are the EU fl agship space programmes. They are the fi rst priorities of the EU space policy. This is constantly confi rmed at EU political level since 2007. They form also an integral part of the Europe 2020 strategy, which contains our strategic objectives for growth in this decade. These programmes will generate innovative downstream services, new business opportunities and jobs creation across various sectors of the European economy. For all these reasons the Commission remains fully committed to securing the timely completion and sustainable long-term exploitation of these fl agship programmes.

How to address the confl ict of interests of Galileo with other satellite navigational program?

Galileo shares resources with other global or regional satellite navigation programmes, be they GPS (United States), Glonass (Russia), Beidou (China) and others. The compatibility between the EU system and these systems is our main concern. To this end, the Commission consults regularly with its international partners, bilaterally as well as in multilateral fora. We have to live under one roof, which we achieve through consultation, including under the United Nations umbrella.

What are the challenges in international cooperation?

I see three challenges that can be best tackled through international cooperation: achieving compatibility among the global navigation satellites systems; providing satellite-based safetyof- life services for the civil aviation community, including through the extension of European services to Africa whenever possible; and enhancing the uptake of European GNSS technologies and services worldwide. The Commission is leading the European effort in that matter with the very active support of the European Space Agency, the European GNSS Agency, and the European External Action Service.

As I already mentioned it, space systems can respond to the strategic needs of the EU, including the security and defence dimensions. Space can do a lot to improve security in Europe and to protect the lives and safety of European citizens. Security aspects are already included in our two fl agship programmes. GMES, for example, is developing services aimed at humanitarian and crisis management operations, maritime surveillance and border control.

Galileo will provide a restricted and robust Public Regulated Service (PRS) for government-authorised users such as the police, military or security services. Therefore, the PRS can have important impacts on the EU’s Common Foreign and Security Policy and on the European Security and Defence Policy.

The EU has recently agreed on the rules under which the EU Member States, EU institutions and bodies, third countries and international organisations may access the Galileo PRS. This paves the way for further development of the security and defence interests of the European Union.

The Commission attaches great importance to the competitiveness of the European space industry. We are actively involved together with ESA and EU Member States in the elaboration of actions to boost global competitive position. In its Communication on the EU space strategy adopted last April, the Commission described the key points of its future space industrial policy.
Its main objectives are to further develop a solid, effi cient and balanced industrial base in Europe and support SME participation, to support the development of innovative technologies, cross-fertilisation, high-skilled manpower and provide policy support for increased market access, to develop markets for space applications and services and to ensure the technological nondependence and an independent access to space. The Commission also examines whether the expansion of space activities raises legal issues which would need to be addressed at European level. On this the Commission may come forward with more concrete ideas on space industrial policy which I intend to propose in 2012.

Any focus on research, development and innovation in space segment?

Space is a major theme in the 7th European Research Framework programme. I see three main directions in research and innovation to support space-related activities, on which Europe should focus:

• Monitoring the eco-system of the Earth and providing of information and services from space-based system to the various users. The EU through FP7 has invested some EUR 300 millions in Earth Observation services in the land, marine, atmosphere and security domains as well as in supporting emergency response services with space data.
• Provide satellite-based navigation services for every citizen and a large number of economic fi elds like land, air and marine transport, communication and security.
• Last but not least is the objective to explore the origin and the future of our solar system and deepen our knowledge on the basic principles of the Universe.
• For all this Europe needs a sophisticated science, technology and innovation basis. A dedicated research and development effort is needed to make Europe nondependent on technologies critical for space endeavours. Some 60% of electronic components needed for space still have to be imported from outside the EU. 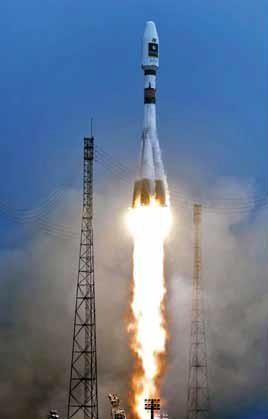 A major challenge is to protect humans and our space infrastructures from threats from space weather; we do this in cooperation with US institutions including NASA, NOAA and other international partners. Another large project on mitigating threats posed by asteroids to our planet will start in the following months with participation of a large European consortium together with US and Russian scientists.

The growing amount of space debris is causing us more and more problems. We need technologies to mitigate collisions in orbit and to actively remove old satellites. With projects on rover and robotic technologies for space exploration the EU programme supports international efforts to explore our solar system.

To guarantee Europe’s independent access to space and make launches more affordable, the Research Framework programme is contributing also to the development of new clean and effi cient propulsion technologies.

In conclusion I would say that investments in space science and technology directly contribute to the attractiveness of European research establishments and the competitiveness of European industry. They create highly qualifi ed jobs and support Europe’s role as a global economic power for the future.