The Brahmaputra river, a major trans-boundary river in the Eastern Himalayan region, originating in China flows through India and Bangladesh before draining into the Bay of Bengal. The river is known as Yarlung Tsangpo in Tibet, Siang in Arunachal Pradesh and Brahmaputra from Sadiya in Assam. It is a lifeline for the dense population residing in its extensive and highly fertile floodplains in Arunachal Pradesh and Assam in India. Any changes in the river’s flow quality or quantity is a cause of concern for the people depending on the river for various reasons. Towards the end of November 2017, people residing beside the river at Pasighat (Arunachal Pradesh), where the river just reaches the plains, noticed an abnormal increase in sediments on the river. The Brahmaputra usually carries a lot of sediments during the monsoon season but even after the monsoons had subsided, the sediments on the river had not decreased and there were many reports of fishes and other aquatic life dying and the quality of water not suitable for any use by the local dwellers. The news resulted in several debates and the issue turned into an international concern due to the trans-boundary nature of the river. Many government, research and academic institutions started investigating on the quality of the river as well as the possible genesis of this sudden increase in turbidity levels. Observations made by Central Water Commission, Govt. of India on turbidity levels of water samples taken from the Siang River at Pasighat on 27 November 2017 showed an abnormally high suspended and particulate matter concentration of 425 NTU. The Brahmaputra River has been normally observed to have turbidity levels ranging from 78-100 NTU (Das et al, 2014). According to the news reports, the concentration of sediments, as observed by Indian Institute of Technology, Guwahati, had doubled in the following 10 days making the river waters highly unsuitable for the survival of aquatic life and use by human and wildlife population.

The North Eastern Space Applications Centre (NESAC), a pioneer institute from North East India in using Space Technologies for various geo-spatial applications, also investigated the matter with the help of remote sensing technology. Remote sensing has become the primary source for rapid damage assessment and monitoring particularly for large or inaccessible areas during disasters due to the availability of synoptic temporal images (Martha et al, 2017; Borah et al, 2018). Temporal Sentinel-2 images acquired on 05 November 2017 and 25 November 2017 were analysed for finding out the probable cause for the changes in the river discharge.

Changes in reflectance of the Siang river was noticed at Pasighat in the image acquired on 25 November 2017 compared to the previous image. Further investigations on the temporal satellite images to the upstream of the location revealed a zone of severe landslides on both sides of the river channel around 425 kms upstream of Pasighat lying within Tibet. It was also observed that this area is at a close proximity to the epicentre of the recorded 6.4 magnitude earthquake on 17 November 2017. The total area affected by landslides is around 28 sq kms. Three major landslide-dammed lakes were observed to be created on the river channel due to the blockage of the channel by landslide debris along with drastic changes in the river course with significant increase in sediments downstream of the landslide affected region. Figure 1 shows the area where changes in the river quality was first observed (near Pasighat) and the zone of landslide occurrence upstream of the observed location.

The Himalayas are very prone to occurrence of earthquakes because of its active tectonics and frequent earthquakes of varying magnitudes occur in most of the fault boundaries. Figure 2 shows the seismicity of the Siang Basin from 1900 to present as recorded by USGS. It is observed that even though the entire region is prone to occurrence of earthquakes, earthquake epicentres are concentrated to some specific locations in the basin. The study area falls under one such location of frequent seismicity. The earthquake epicentres are also related to the presence of number of active faults and sutures in the basin. The Himalayan Central Thrust passes right through the middle of the Siang Basin and the Main Boundary Thrust is to the southern boundary of it (Styron et al, 2010; Taylor & Yin, 2009). Though earthquakes of higher magnitudes (greater than 6) are lesser in number, there is a frequent occurrence of earthquakes between magnitudes 3 to 6. The earthquake that occurred on 17 November 2017 is the earthquake of highest magnitude (6.4) that might have occurred in the recent past in this region. It was associated with a number of foreshocks and aftershocks of varying magnitudes. 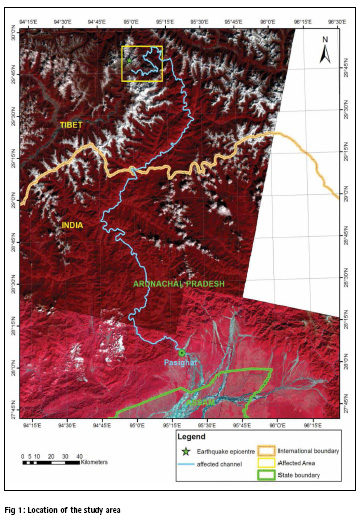 The lakes formed due to the occurrence of earthquakes on 17 November 2017 that were first identified on the Sentinel-2 image acquired on 25 November 2017 were continuously monitored with the help of satellite images acquired on 10 December 2017, 4 January 2018 and 20 March 2018. Not much changes in the surface area of the lakes were observed. Satellite images and SRTM Digital Elevation Model (DEM) of 30 m resolution were used to calculate the surface area and volume of the lakes created due to the landslides. The landslides were named L1, L2 and L3 from upstream to downstream. 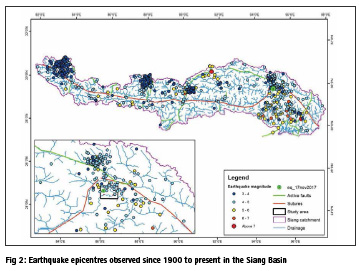 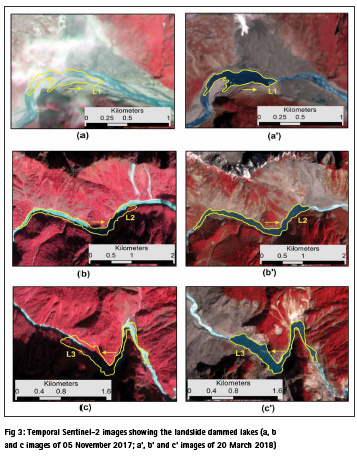 The authors are highly thankful to European Space Agency (ESA) for the provision of near real-time Sentinel-2 images; United States Geological Survey (USGS) for SRTM DEM and earthquake epicentres; and HimaTibetMap for providing data on active faults and sutures.

Taylor, M., and Yin, A., 2009, Active structures of the Himalayan-Tibetan orogen and their relationships to earthquake distribution, contemporary strain field, and Cenozoic volcanism. Geosphere, 5(3): 199-214.