Sweden is generally associated with an attractive natural environment. A long history of settlement and use of land resources, and relatively sparse populations have led to diverse landuse practices and access traditions. 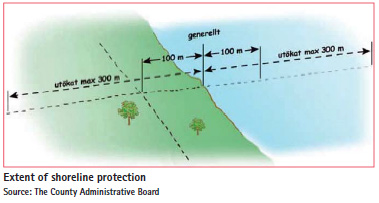 Sweden offers a great variety of winter sports. Frozen lakes, public skating areas, forests and open fields are quickly invaded by skaters and cross-country skiing enthusiasts when temperature falls below zero, and snow covers the landscape. During summer time people head into the woods to pick berries or mushrooms, hike in the mountains, go sailing or kayaking in the archipelago, or set off white-water rafting on one of Sweden’s many rivers. Whether they look for peace and tranquility or a fix of adrenaline, these outdoor enjoyers all share a love for the wild life. Sweden is a major center for ecotourism and the natural splendor is the number one attraction among foreign visitors from more densely populated parts of the world. According to the County Administrative Board’s guidelines, all information about Sweden’s nature as a tourist destination, whether it is spread abroad, at the border or within the country, should indicate that consideration and caution are requirements when spending time in nature.

The Right of Public Access, allemansrätten, is a unique privilege in Sweden. The origins of this right date back to the local laws and customs of the Middle Ages. It applies to everyone and is the same for Swedes and visitors from abroad. Everyone has the right to be out in the countryside. For example, one may walk freely in natural fields, travel by boat and swim in someone else’s waters, and pick mushrooms and berries in the forest. The common principle is that visitors are allowed to walk across properties at a rational distance from houses, yards, gardens and fenced-in areas. This way, people can enjoy most natural spaces in Sweden, whether they are privately owned or owned by e.g. the government.

With this right comes a great responsibility to take care of nature and wildlife, and to show consideration for landowners and for everyone else that is out and about in the countryside. Basically, we can spend time in such areas as long as we do not disturb or destroy. Loud shouting, breaking tree branches, or walking in cultivated fields are consequently not permitted. As long as these principles are respected, and common sense is used at all times when judging what is or is not possible, there is no reason why everyone should not continue to enjoy these freedoms long into the future.

With a growing global population and increased pressure on natural areas for recreational purposes, the principles of the Right of Public Access are more important than ever, providing an important framework for the sustainable enjoyment of Sweden’s countryside and wilderness areas.

The purpose of the Environmental Code is to promote sustainable development which will assure a healthy and sound environment for present and future generations. Such development will be based on recognition of the fact that nature is worthy of protection, and that our right to modify and exploit nature must be carried out with responsibility and wise management of natural resources.

The Environmental Code shall be applied in such a way as to ensure that:

1. Human health and the environment are protected against damage and detriment, whether caused by pollutants or other impacts;

2. Valuable natural and cultural environments are protected and preserved;

4. the use of land, water and the physical environment in general is such as to secure a long term good management in ecological, social, cultural and economic terms; and

5. Reuse and recycling, as well as other management of materials, raw materials and energy are promoted so that a cycle is reached.

During the early 20th century, society changed by a strong increase in urbanization. Agricultural population decreased from 80 to 35 percent of the total population between year 1900 and 1930. The industrial workers increased from 10 to 40 percent. This led to a possibility for the enjoyment of nature, and the demand for active outdoor activities increased. Some type of protection of e nature was therefore needed. Discussions on this topic were led by politicians, protection-associated related persons and spokesmen of architects of a “socially motivated nature protection”.

1936, Government had written two bills regarding the possibility of enhancing public outdoor recreation. These bills discussed both the growing need for outdoor activities, and the securing of accessibility to natural areas.

The Parliament requested from the Government an investigation, which was appointed in 1937 and called “leisure inquiry”. The final report was submitted in 1940, providing possibilities for swimming, both in the landscaped swimming areas and at other beaches. The report mentioned, among other things, that not only the population in urban areas had needs, but also the residents of the countryside. The debate came to a stop due to World War II, and the investigation did not lead to any legislation.

In 1947, the Building Act included the first rules about beach settlements. The County Administrative Board was thereby given (limited) authority to prohibit development in particular protected areas. The reasons for this were mainly related to the protection of nature, not to social aspects of the public’s need for access to outdoor recreation, as was the case of the previous Investigation report.

Not long after this came the first legislation focused on beach areas. An Act on temporary building prohibition in certain coastal areas came into effect in 1950. The purpose was to secure access to swimming and outdoor activities for the public.

The temporary law was replaced in year 1953 by riparian law, which mainly consisted of rules from the temporary Act. In short, the County Administrative Board could thereby prescribe areas where settlements could not be established without a permit. Those beaches were protected up to a limit of 300 meters from the shoreline.

The Beach Act was valid for twelve years before it became part of the Environmental Protection Act in 1965. As a consequence, 13,700 km of the Swedish shoreline was now protected from exploitation. The average width of the shore protection was 158 meters.

This selective shore protection was taken away by the legislative change that came in 1975. A general shoreline protection for the whole of Sweden was then introduced, forbidding erection of buildings. The protected zone was determined to be 100 meters from the shoreline, and could after a decision by the County Administrative Board be extended to 300 meters in areas with particular needs for further protection. In other areas, the County Administrative Board could decide to remove the general shoreline protection where it was obviously that it was irrelevant to outdoor recreation.

After year 1994, the objective of shoreline protection became both securing public access to beaches and preserving good living conditions on land and in water for plants and animals. That means that some areas that were previously not of any major interest for outdoor recreation and swimming, for example streams and ponds, became subject of protection. These areas are mainly of interest for the sake of biodiversity. Related to the amendment in 1994, the Environmental Protection Agency was commissioned to continue a paused work on shoreline protection. The idea was to have different criteria for granting exemption from the shoreline protection between different types of areas. Relaxation should e.g. be in sparsely populated areas. The Government reported in 1994 its assessment of the idea of differentiated shoreline protection and more flexible management in sparsely populated areas with plentiful lakes and streams. The areas based on analyses of certain criteria would have specified in the municipal comprehensive plan.

However, the Environmental Protection Agency’s mission was recalled later in 1994, after Sweden changed governments. There was thus no differentiated shoreline.

All land and water areas are protected in a buffer zone extending up to 100 meters on either side from the shoreline. The County Administrative Board may extend this zone to a maximum of 300 meters from the shoreline, if this is necessary in order to fulfil the purposes of shoreline protection.

Within shoreline protected areas it is prohibited to:

2. make alteration of buildings in order to serve a purpose that is significantly different from that for which they were previously used;

3. dig or make other preparations for the purpose of construction works referred to in points 1 and 2;

4. erect other structures which prevent the public from entering an area in which it would otherwise have been able to move freely or which significantly affect the living conditions of animal and plant species; or

5. take other actions which significantly affect the living conditions of animal and plant species.

The prohibitions do not apply to buildings, structures, works or measures that are necessary for the purposes of agriculture, fishing, forestry or reindeer husbandry which are not used for residential purposes and by its function needs to be located at or close to the shoreline. Furthermore, neither public roads nor railways are affected by the rules.

The Government may decide that shoreline protection should not apply to a smaller building or structure that is a complement feature to an existing main building, if the small construction is placed within 15 meters from the main building and not closer to the shoreline than 25 meters.

Even if shoreline protection applies in an area, one may get an exemption. Such exemptions may be granted under special circumstances only. The scale of the measure or the structure, and the present and future importance of the area are taken into account. Normally, exemptions should not be granted in areas that are of particular importance with respect to nature conservation or recreation.

Exemptions must not be granted if there is any risk of unacceptable impacts on biological assets. They may, however, be granted where the site is situated on land that has already been developed, or where outdoor recreational facilities are to be built.

Certain waterfront areas in Sweden are appointed important for rural development. In these areas the chance to get an exemption is higher. The areas are pointed out in the legislation, and are often located in remote parts of Sweden. The areas are characterized by a less dens population and a lower public demand for shore areas. The purposes of this exemption are to prevent depopulation, support settlement and to facilitate local business.

If the shoreline protection should no longer apply or if an exemption is granted, it should always, as far as possible, be a free passage secured between the water and the construction.

Violation of the shoreline protecting rules

Breaking the shoreline protection rules can pass for a crime against territorial protection of the nature. According to the Environmental Code, Chapter 29, Section 2, no. 2, anyone who intentionally or by negligence, within a shoreline protected area, builds or takes any other action prohibited by the rules shall be sentenced to monetary penalty or imprisonment in up to two years. This crime has a period of limitation of five years from the point in time when the crime was committed.

The number of criminal charges related to violations of territorial protection, also including other protection than shoreline protection, was during the years 2008- 2013 around 40 to 60 per year (Source: The Swedish Prosecution Authority)

The Swedish shoreline protecting has a strong position and a long history in Sweden. This has led to the possibility for all Swedes, as well as visitors to the country, to easily access open water and the area surrounding it.

The interpretation of the authors is that shoreline protecting rules is well accepted and highly appreciated amongst most swedes and, not least, foreign visitors.