This document presents some results of the scientific research conducted by Training on EGNOS-GNSS in Africa (TREGA) laboratory members concerning the feasibility of a potential Satellite Based Augmentation System (SBAS) in Sub-Saharan African regions as part of its ‘training through research’.

Real data from different African networks [2][3][4] have been analysed during solstitial and equinoctial months of the year 2013, characterized by high solar activity in the present solar cycle. In particular, the months of July and October 2013 have been used to represent different ionospheric seasonal conditions.

Two algorithms have been selected for the assessment of the SBAS system performance: an EGNOS-like processing set corresponding to the version 2.3.2 [5] and one specific version produced to optimize the performance in lowlatitudes [5]. The use of these two algorithms was part of the training through research conducted in TREGA project.

Different scenarios characterized by various geomagnetic disturbed periods have been selected in order to evaluate different ionospheric conditions and possible degradation or improvement of the SBAS system performance. Particular emphasis is given to the existing geomagnetic indices for those periods. Several indicators (Kp, Dst, Ap) [8] have been considered in order to evaluate the status and behavior of the ionosphere and to understand if there is a possible correlation with the SBAS system performance.

This document shows real data analysis of July and October 2013. The data were obtained from available GNSS receivers of NIGNET, SONEL and AFREF/IGS networks [2][3][4]. The year 2013 was selected because it corresponds to the first peak of the solar cycle 24. July and October were used to represent two ionospheric seasonal conditions: 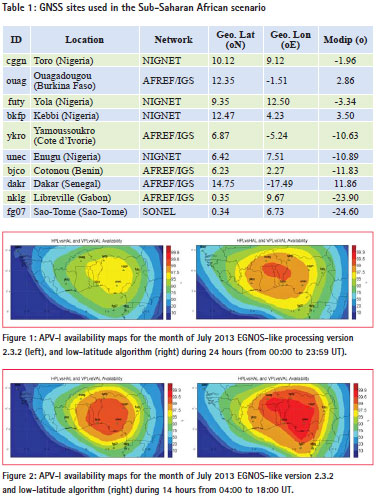 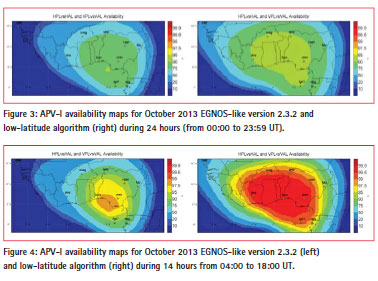 solstice and equinox. The selected stations fall within the borders of the Northern and Southern crests of the Ionospheric Equatorial Anomaly (IEA) affecting low-latitude regions [9].

The details of the stations are shown in Table 1; it is important to emphasize that this particular scenario was designed following TREGA area of interest (Sub-Saharan African region), the spatial availability and the quality of the GNSS observables in the area.

Two algorithms have been used for the analysis of SBAS system performance: the EGNOS-like processing set version 2.3.2 and one specific version produced to optimize the performance in low latitude regions [5].

Figure 1 shows the difference between the two algorithms on SBAS system availability according to APV-I level of service (Horizontal Protection Level – HPL < 40 mete rs and Vertical Protection Level – VPL < 50 meters) for July 2013. Figure 2 shows the same monthly availability of July but considering only 14 hours (04:00 – 18:00 UT) in each day; i.e., discarding the periods of post-sunset to post-midnight.

For July 2013, it is shown that for both algorithms during daytime period the availability is above 99% in the area that contains a sufficient number of stations. Including post-sunset and postmidnight hours, there is degradation in availability of around 2% – 5%, less pronounced for the low latitude algorithm.

It is obvious that there is a clear degradation in post-sunset and postmidnight hours using both algorithms when analysing October 2013 (10% – 15% in comparison to results from July 2013. The next section covers in details the phenomenon).

The ionosphere over Sub- Saharan African region, being under the effects of the IEA, is a major source for GNSS radio-wave signals from satellite to Earth. At these latitudes, the ionosphere is characterised by the presence of irregularities, in particular near the crests of the IEA. It is well known that most part of the strongest irregularities occur in the post-sunset period of the equinoctial months with high solar activity [10]. For this reason, the ionosphere of the Sub-Saharan region was evaluated to estimate its effect on the SBAS system degradation during post-sunset and postmidnight hours (Figure 1, Figure 2). The Total Electron Content (TEC) is a parameter widely used in studies of near-Earth plasma environment [11]. It describes how the ionosphere responds to solar and geomagnetic conditions and it is responsible for range error that produces a time delay in the radio signal. In this work, the time series of Rate of Change of TEC index (ROTI) was taken as a proxy for the presence of ionospheric irregularities. The time-derivative of TEC, the ROT and its standard deviation (ROTI) are:

The monthly ROTI averaging all stations is shown in Figure 7. The presence of irregularities explains the difference in SBAS availability between 24-hour analysis and 14-hour analysis (discarding post-sunset and post-midnight period). This is in accordance to ICAO task force indications on ionospheric effects for GNSS aviation [9]. The degradation in availability is higher in October than in July due to the difference in the level of irregularities (Figure 7). 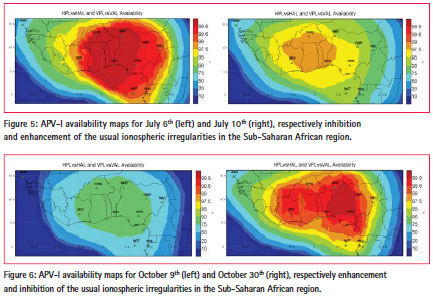 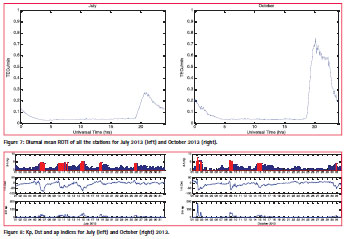 Finally a study concerning geomagnetic indices has been done (Figure 8). These indices are often used in order to evaluate and understand global and regional level of ionospheric disturbances [12]. They characterize the contribution of different magnetospheric and ionospheric currents to the H component of geomagnetic field. The intensity of the electric fields and currents, as well as the magnetospheric ring current, is strongly dependent on the variations of the interplanetary magnetic field (IMF). This is due to several effects including magnetospheric convection, ionospheric dynamo disturbance and various kinds of wave disturbances [13].

The magnetospheric ring current cannot directly penetrate the equatorial ionosphere being; instead it is strongly related to the auroral ionosphere. The prompt penetration of the convection electric field from high latitudes to equatorial latitudes during geomagnetic disturbances causes the F region plasma modifications, and up-lift or down-lift of the ionosphere during daytime and night-time with correspondence to the eastward and westward electric fields [13].

In order to investigate such phenomena, various empirical relations in terms of different indices [8] have been used. An analysis of geomagnetic indices has been done to compare their behavior and possible correlation with the SBAS system performance in case of quiet and disturbed conditions. Figure 8 includes relevant indices for July and October 2013 (Kp, Dst, ap) [8]. By analysing the SBAS performance (Figure 5, Figure 6) in the area, it is shown that standard indices are not consistent indicators of ionospheric conditions and their behavior does not find a correspondence with the SBAS system availability in the Sub-Saharan African scenario analyzed in this paper.

For instance, there is a different effect on the daily system availability during different disturbed conditions with similar Dst values (see Figure 5 and Figure 6 for the system availability), in October (9th, 30th ) and July (6th, 10th) 2013. In these days, the system performance notably enhances or degrades with respect to the monthly average for the cases analyzed (Figure 5, Figure 6). This effect is in accordance with the studies carried out for mid-latitudes [12].

Results of a possible SBAS performance assessment in Sub-Saharan African region for the months of July and October 2013 indicate a difference of 10% – 15% in APV-I availability between solstitial and equinoctial month using both algorithms.

In addition, the presence of ionospheric irregularities and their effect on the SBAS system performance cannot be consistently related to the geomagnetic activity indices values.

It is expected that use of a more dedicated network (high quality in GNSS observables) and more adequate distribution of the stations in the Sub- Saharan African region would improve the performance of the potential SBAS analyzed in this paper.

Being the study indicative, it should consolidate with a much larger statistic that could impact some of the conclusions.

This research was supported by theEuropean Commission (EC) to carry out the project TRaining on EGNOS-GNSS in Africa (TREGA)., through a Contribution Agreement with theInternational Centre for Theoretical Physics (ICTP)totrain a core number of African professionals in order to face technical problems related to the operational conditions of Sub- Saharan Africa. The authors also thank the providers of GNSS Stations (Netwo rks: AFREF, NIGNET; IGS and SONEL).