To implement the indoor positioning system, the first step is to collect and build the positioning database for the positioning system. In this work, we attach 9 IRIS motes developed by Crossbow Inc. on the ceiling of classroom 5834 as the transmitters and divide the floor into 25 grid points. The size of each grid is 137.25 cm by 152.5 cm, and the separation distance between each sensor attached on the ceiling is 274.5 cm. The setup is shown in Figure 3. 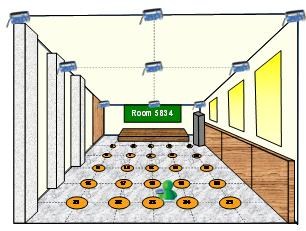 Figure 3: The arrangement of the experimental setup.

In the static experiment, we visit all the grid points sequentially to perform the positioning test, and the number of the test samples is 67500 samples. The Cumulative Distribution Functions (CDFs) of the positioning errors by the NN algorithm and the KWNN algorithm with to 4 are shown in Figure 4. 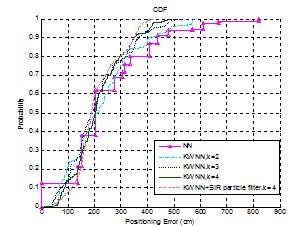 Figure 4: The CDFs of the positioning errors by the NN algorithm and the KWNN algorithms for the static experiment. 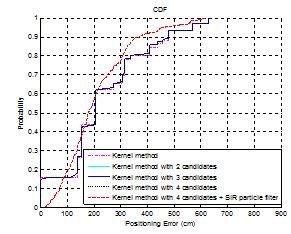 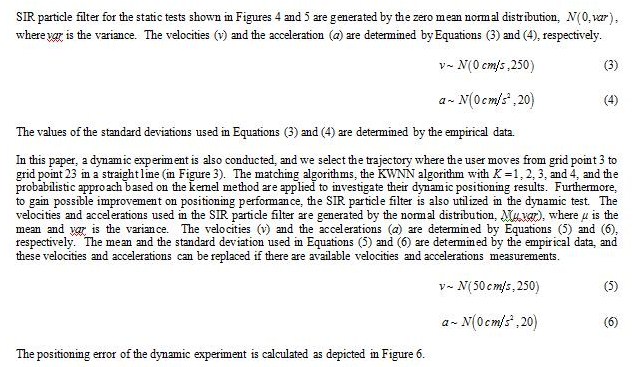 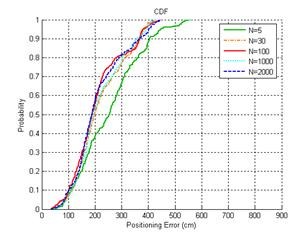 Figure 7: The CDFs of the positioning errors for different particle numbers. 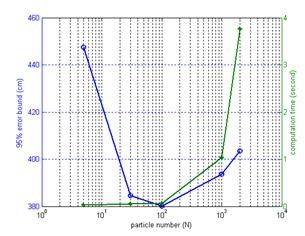 Figure 8: The trade-off study between the positioning error and the computation time for different particle numbers.

Table 3: The comparison of performance for different particle numbers

In order to demonstrate the proposed indoor LBS test-bed, the Real Time Indoor Positioning System (RTIPS) of the DAA building at NCKU is developed. The Borland C++ Builder 6.0 is used to build this RTIPS. The main objective of the RTIPS is to provide the real time indoor positioning services on a 3D indoor GIS. In addition, the RTIPS is integrated with the Microsoft SQL Server to provide the classroom search function. This developed RTIPS is composed of the real time positioning and the information search services. 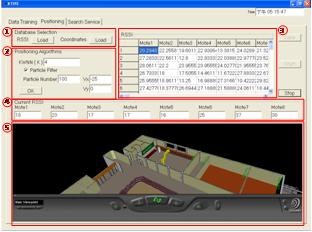 Figure 9: The real time indoor positioning test at the classroom 5834 of the NCKU DAA building.

This RTIPS also provides the search service to complete the indoor LBS. In Figure 10, block 2 is the course table information. When users double click the course table, the course information is shown in the text box of block 1. In block 3, users could click the “Search” button, and the search result will be presented in the 3D indoor GIS. Figure 10 shows an example 3D indoor GIS with the integration of the cartography and database techniques. 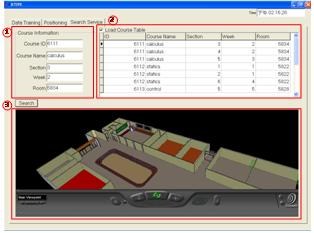 Figure 10: An example 3D indoor GIS with the integration of the cartography and database techniques.

This paper utilized a Wireless Sensor Network (WSN) based on the ZigBee radio to implement an indoor positioning system. The positioning algorithm used in this paper is the fingerprinting method. According to the experiment results, the K-Weighted Nearest Neighbors (KWNN) algorithm with K=3 or 4 could obtain the better positioning results. This paper then combined the fingerprinting method with the Sampling Importance Resampling (SIR) particle filter to enhance the positioning performance. However, if the particle filter is applied in the real time application, the trade-off between the particle number and the positioning performance must be considered. According to the analysis result presented in this paper, the particle density in the range of 0.9 to 2.99 (1/m2) would be a better design.

In addition, this paper successfully demonstrated a rapid and practical procedure to develop the local Geographic Information System (GIS) which applied the Computer-Aided Design (CAD) software and the Virtual Reality Modeling Language (VRML) technique. This paper combined the indoor GIS, the indoor positioning system, and Microsoft SQL Server to complete an indoor Location Based Service (LBS) test bed. Finally, the Real Time Indoor Positioning System (RTIPS) of Department of Aeronautics and Astronautics building at National Cheng Kung University was developed to demonstrate its capabilities. This example RTIPS also provides the course search function, and the search results are presented on the developed 3D indoor GIS.

The paper is supported by Taiwan National Science Council under NSC-96-2221-E-006-187. The authors gratefully thank for the support.