According to the fast growth and development of the urban environment and its subsidiaries, including universities, research centers, health, sports and recreation, shopping malls and stores … the growing needs to access and rapid web-based responses, thereby need for an intelligent or smart system of visual and web-based are inevitable.

Web-GIS and Anatomy of a web-mapping application

Often the terms Web-GIS and web mapping are used synonymously, even if they do not mean the same. In fact, the boundary between web maps and web-GIS is blurry. Web maps are often a presentation medium for web-GIS, and web maps are increasingly gaining analytical capabilities. Web mapping is the process of designing, implementing, generating, and delivering maps on the World Wide Web. While web mapping primarily deals with technological issues, web cartography additionally studies theoretic aspects: the use of web maps, the evaluation and optimization of techniques and workflows, the usability of web maps, social aspects, and more. Web Geographical Information Systems (web -GIS) or Internet GIS are related to web mapping but with an emphasis on analysis, processing of projectspecific geodata, as well as exploratory aspects. [1] To put it bluntly, it’s some type of Internet application that makes use of a map. This could be a site that displays the latest geo-tagged images from Flickr, a map that shows markers of locations we’ve traveled to, or an application that tracks invasive plant species and displays them. If it contains a map and it does something, we could argue that it is a web map application. The term can be used in a pretty broad sense. Web-GIS emphasizes geodata processing aspects more involved with design aspects such as data acquisition and server software architecture such as data storage and algorithms, than it does the end-user reports themselves. The term location-based services refers to web mapping consumer goods and services. Web mapping usually involves a web browser or other user agent capable of client-server interactions. Figure 1 shows what are the main components of the web-GIS application system and how they are interacting with each other. Within the past few years, the popularity of interactive web maps has exploded. In the past, creating interactive maps was reserved for large companies or experts with lots of money. But now, with the advent of free services like Google and Yahoo! Maps, online mapping is easily accessible to everyone. Today, with the right tools, anyone can easily create a web map with little or even no knowledge of geography, cartography, or programming. Web maps are expected to be fast, accurate, and easy to use. Since they are online, they are expected to be accessible from anywhere on nearly any platform. There are only a few tools that fulfill all these expectations.

OpenLayers is one such tool. OpenLayers is an open source, client side JavaScript library for making interactive web maps, viewable in nearly any web browser. Since it is a client side library, it requires no special server side software or settings. It’s providing both novice developers and seasoned GIS professionals with a robust library, OpenLayers makes it easy to create modern, fast, and interactive webmapping applications. OpenLayers is a powerful, community driven, open source, pure JavaScript web-mapping library and HTML toolkit to quickly make crossbrowser web maps. With it, it is possible easily to create web map mashup using WMS, Google Maps, and a myriad of other map backends. [2] Open source software make it possible to creating completely free web-GIS application.

This work explains that for each component of web-GIS application which of open source software is used. Clients, Web Server, Data Server and Web Map Server are the main components of a web-GIS. Figure 1 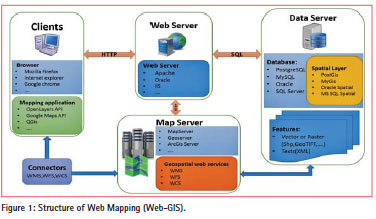 Client is referring to the user’s computer, specifically their web browser. The only thing that needs to have to make OpenLayers work is the OpenLayers code itself and a web browser. OpenLayers works on nearly all browsers and can served by any web server. It is usable in a modern, standard-based browser such as Firefox, Google Chrome, Safari, or Opera. Nevertheless, OpenLayers is an API that provides with tools to develop web maps. Instead of building a mapping application from scratch, it is possible to use OpenLayers for the mapping part. API, is a set of routines, protocols, and tools for building software applications. The API specifies how software components should interact and are used when programming graphical user interface (GUI) components.

In order to display any feature once user ask to appear on the map it needs to import GIS dada. Features, which are using as a GIS data, can be any vector or raster layers (Shp, GeoTIFF…) and can be Text (XML). Spatial information on a computer deal with GIS applications. There are many different GIS Applications available and are normally programs with a graphical user interface that can be manipulated using the mouse and keyboard. Quantum GIS is a type of GIS Applications which is a crossplatform free and open-source desktop geographic information systems (GIS) application for viewing, editing, and analyzing geospatial data from a variety of vector, raster, and database formats. QGIS provides integration with other open source GIS packages, including PostGIS, GRASS, and MapServer (e.g. GeoServer) to give users extensive functionality. Plugins, written in Python or C++, extend the capabilities of QGIS. There are plugins to geocode using the Google Geocoding API, perform geoprocessing (fTools) similar to the standard tools found in ArcGIS, interface with PostgreSQL/PostGIS, SpatiaLite and MySQL databases. 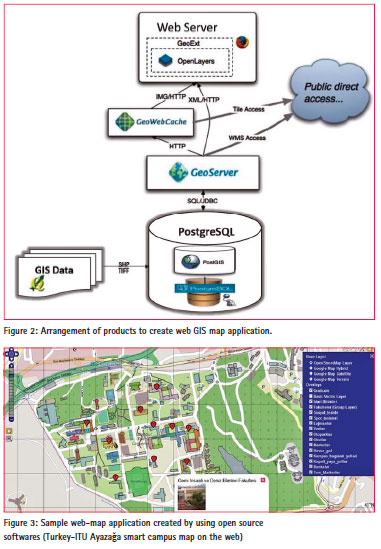 A web server is a computer system that processes requests via HTTP, the basic network protocol used to distribute information on the World Wide Web. The term can refer either to the entire system, or specifically to the software that accepts and supervises the HTTP requests.

The most common use of web servers is to host websites, but there are other uses such as gaming, data storage, running enterprise applications, handling email, FTP, or other web uses. The primary function of a web server is to store, process and deliver web pages to clients. The communication between client and server takes place using the Hypertext Transfer Protocol (HTTP). Pages delivered are most frequently HTML documents, which may include images, style sheets and scripts in addition to text content. While the primary function is to serve content, a full implementation of HTTP also includes ways of receiving content from clients. This feature is used for submitting web forms, including uploading of files. [3]

A Data Base Management System is a database program. Technically speaking, it is a software system that uses a standard method of cataloging, retrieving, and running queries on data. The DBMS manages incoming data, organizes it, and provides ways for the data to be modified or extracted by users or other programs.

There are many DBMS’s but some more known examples include MySQL, PostgreSQL, Microsoft Access, Microsoft SQL Server, SQL Server, FileMaker, Oracle, RDBMS, dBASE, Clipper, FoxPro, SAP and IBM DB2.[3] Since there are so many database management systems available, it is important for there to be a way for them to communicate with each other. For this reason, most database software comes with an Open Database Connectivity (ODBC) driver that allows the database to integrate with other databases. For example, common SQL statements such as SELECT and INSERT are translated from a program’s proprietary syntax into a syntax other databases can understand. Database management systems are often classified according to the database model that they support; the most popular database systems since the 1980s have all supported the relational model as represented by the SQL language. Sometimes a DBMS is loosely referred to as a ‘database’.

In this work for mange and store the GIS data PostgreSQL/PostGIS is used. A complete, functional open source DBMS, Postgres (as it’s commonly referred to) seems to be the most popular for open-source web mapping. It requires OSGeo’s PostGIS extension, which comes with the standard Postgres installation, to handle georeferenced data. It is used by OpenStreetMap, GeoServer, MapServer, and CartoDB. Because as it mentioned PostGIS is an open source software program that adds support for geographic objects to the PostgreSQL object-relational database. PostGIS follows the Simple Features for SQL specification from the Open Geospatial Consortium (OGC). [4]

A map server (or map service) provides the map itself. There are a myriad of different map server backends. A small sample includes WMS, Google Maps, Yahoo! Maps, ESRI ArcGIS, WFS, and OpenStreetMaps. [5] The basic principle behind all those services is that they allow us to specify the area of the map we want to look at (by sending a request), and then the map servers send back a response containing the map image.

With many web map servers to use those, just supplying a URL to them in OpenLayers is enough. OSGeo, OpenStreetMaps, Google, Yahoo!, and Bing Maps, for instance, provide access to their map servers (although, some commercial restrictions may apply with various services in some situations). Fortunately, there are numerous of free and/or open source web map servers available that are remotely hosted or easy to set up our self, such as GeoServer which is used in this work.

After storing GIS data on the database (PostgreSQL/PostGIS), GeoServer is used to publish map and the data from database which is written in Java allows to share, process and edit geospatial data. Designed for interoperability, it publishes data from any major spatial data source using open standards. GeoServer has evolved to become an easy method of connecting existing information to Virtual Globes such as Google Earth and NASA World Wind as well as to web-based maps such as OpenLayers, Google Maps and Bing Maps. GeoServer functions as the reference implementation of the Open Geospatial Consortium Web Feature Service (WFS) standard, and also implements the Web Map Service (WMS), Web Coverage Service (WCS) and Web Processing Service specifications.

Figure 2, illustrates how these components are working together to create a web map GIS application.

The result of the current work illustrates that it is possible to implement web mapping systems based solely on open-source software that are not only significantly more cost-effective than many commercial systems but also feature higher graphical quality, interactivity and flexibility. The advantage of this system is that each sections can be produced by different products and any component of the structure can be replaced with other products and vice versa.