Numerical simulations of the optimal geodetic conditions with radioastron

Space Very Long Baseline Interferometry (SVLBI) is the unique space technology that can directly interconnect the three reference systems, which include the Conventional Inertial System (CIS) ﬁxed in space and deﬁned by radio sources, the Conventional Terrestrial System (CTS) ﬁxed to the Earth and deﬁned by a series of observing stations on the ground, and the dynamic reference system deﬁned by the movement of a satellite. In this paper, the Space VLBI mathematical model with notation parameters, and its feasibility for estimation of EOPs are discussed. Simulations have been done for the SVLBI observations and related parameters for RADIOASTRON. With the results of the simulation, the feasibility for the estimation of EOPs has been investigated, then appropriate number of stations and epochs for the estimation of parameters have been analyzed.

For all the three pillars of space geodesy (the geometry of the Earth surface and its displacements, the orientation of the Earth axis and its rotation speed, and the Earth’s gravity field and its time variations), well-defined, highly accurate and stable global Earth-fixed and celestial reference frames are of primary importance. Over the last decade considerable changes took place in space geodesy: the accuracy of the space geodetic techniques has improved dramatically up to

for geometric geodesy, Earth rotation and gravity field measurement. Many new missions are being prepared, planned, or on-going. All these developments pose new and demanding challenges concerning the consistency and accuracy of the three pillars and thus better-defined, more accurate and stable global Earth-fixed and celestial reference frames are crucial to meet these challenges. As a new and rapidly developing technique, SVLBI has tremendous potentials in geodetic research. SVLBI can not only directly interconnect the above two reference frames by determining the 5 Earth orientation parameters (EOPs) which

Following the VLBI Space Observatory Programme (VSOP) of Japan, another Space VLBI mission, called RADIOASTRON, is being planned by Russia with international collaboration for a launch as early as 2010. The two VLBI observatories in Urumqi and Shanghai of China may participate in the observations.

In this paper, the modified SVLBI mathematical model with the EOPs is introduced. The possibility of the model for estimating EOPs has been theoretically studied by Erhu Wei (2008a), and the estimable parameter sequence has been extracted too. Based on these results, the SVLBI observations and the values of related parameters for RADIOASTRON are simulated in this paper. According to the simulated parameters, a matrix A of observation equation will be designed to discuss the validity of the modified model for estimating different EOPs. Finally, the effect of the number of stations, the number of observation epochs and the observation interval on the precision of the EOPs is studied, and the conclusions are presented. 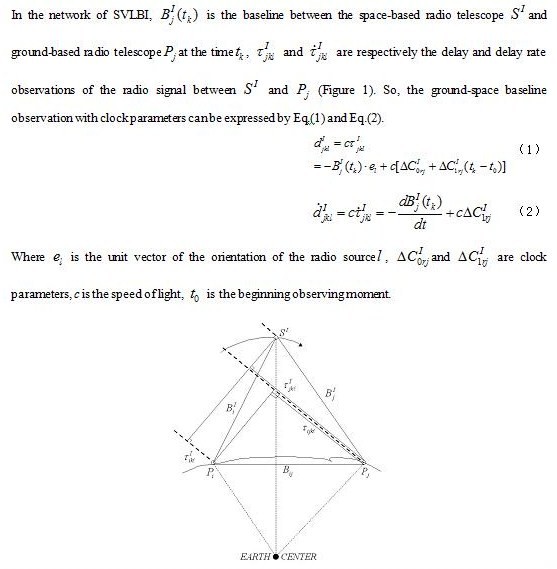 Adam (1990) has derived the mathematical model of ground-space VLBI time delay observation, in which there are no nutation parameters that are used to connect the terrestrial coordinate system and the celestial coordinate system. In order to improve this model, Erhu Wei et al. (2008a) has derived a new SVLBI observation model, which contained the nutation parameters and can be expressed as Eq.（3）. 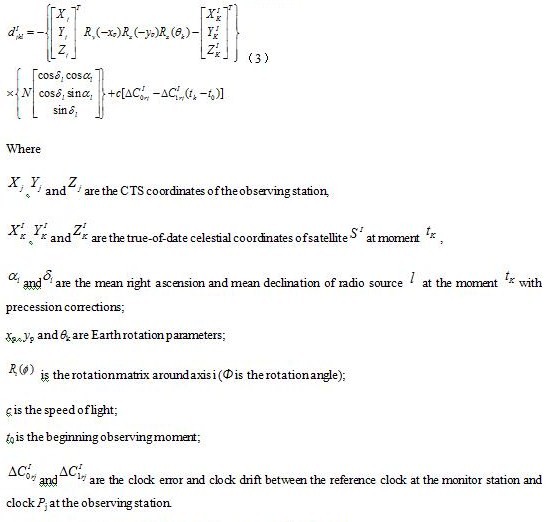 On the other hand, the coordinates of the ground station, satellite and radio source are transformed to the real celestial coordinate system at the moment

by Eq.(3), which solves the transformation between the conventional celestial system and the real celestial coordinate system in the observation. So, all coordinates in the model are united in the same reference frame for the next derivation.

The adjustment is necessary for the time delay observation because the number of the SVLBI observations is very large. The least squares adjustment is adopted here, and the observation equation is derived from Eq.(3) and Eq.(7), which can be expressed as Eq.(8). 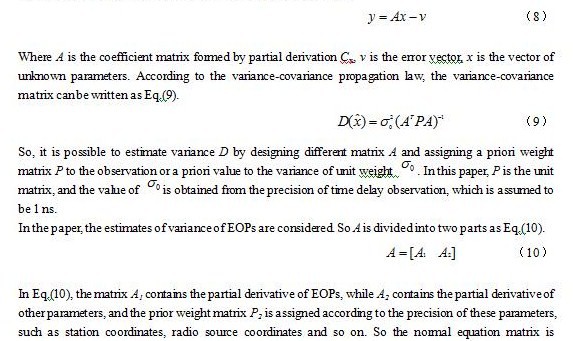 In this paper, only the sensitivity of EOPs will be investigated, and all the other parameters are assumed known or fixed. The precision of EOPs is studied by designing different matrix A.

Data for the Numerical Tests

From the analysis above, only the value of matrix A needs to be calculated. So only the approximation of the parameters mentioned in Eq.(12) needs to be simulated. The coordinates of radio source, approximation of EOPs were found from the IERS Website in Oct.2008. And the Orbit parameters for RADIOASTRON were found from Website RADIASTRON in Oct.2008. With the prior value of these parameters, the partial derivative coefficient can be calculated and matrix A can be formed. In the simulation, some necessary parameters are listed in Table 1 and Table 2. 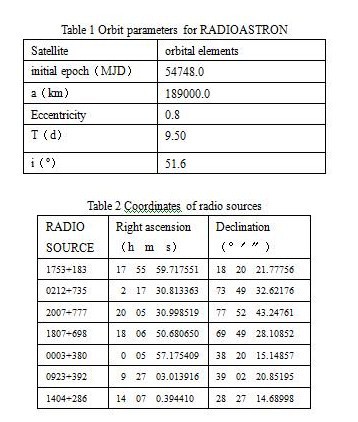 During the simulation, the number of radio sources is not changed. Each observation epoch contains only one radio source. In the experiment, 9 radio sources are used in order to improve the space distribution of the observation and enhance the visibility of the ground stations and the satellite antenna to the same radio source at the same epoch. The configuration range of other parameters is shown in Table 3.

Effect of the Number of Stations

In order to analyze the effect of the increase of observing ground stations on the estimated EOPs, the number of observation epochs will be fixed as 10000, the observation interval will be fixed as 1 min and the number of stations will be increased from 3 to 42 by the step of 3. The results are shown in Fig. 2 and Fig. 3. It can be seen that the precision of each parameter is improved. 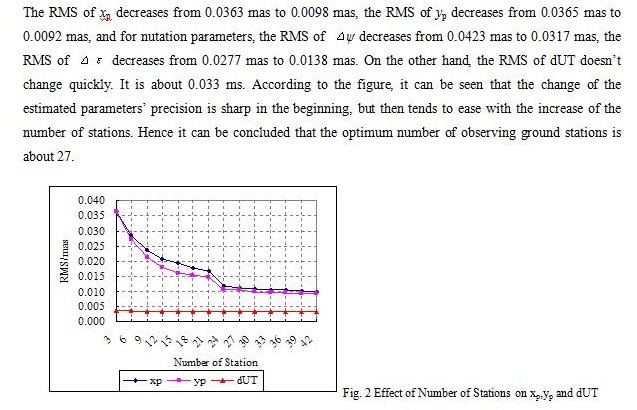 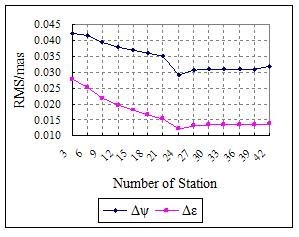 Fig. 3 Effect of Number of Stations on Nutation Parameters 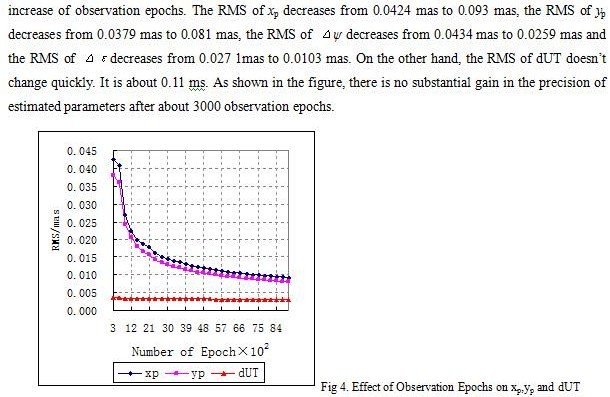 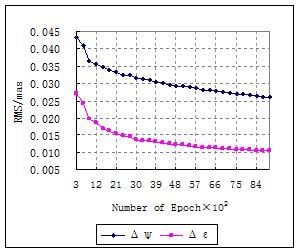 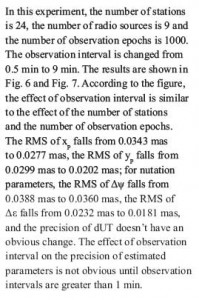 According to the results above, it can be concluded that the optimum number of system parameters could be 27 observing stations, 3000 observation epochs and 1 min observation interval, which are propitious to improve the precision of EOPs estimated with the SVLBI observation from RADIOASTRON.

We must stress, however, that these are simulated results. In fact the present and foreseeable practical realizations of SVLBI are driven by astrophysical goals. The realistic observing setups for RADIOASTRON will be far from making possible to reach the optimum parameters as determined above. For example, the satellite will most likely observe together with a small network of ground radio telescopes (3-5 stations). Due to technical limitations, the pointing of the space-based radio antenna (i.e. the attitude of the massive satellite) cannot be changed quickly enough and over a large angle in the sky. However, the above simulation results will have great reference to the use of RADIOASTRON satellite for geodetic research.