The earthquake investigation committee of the Japanese Government has presented the 2020 version of seismic hazard map for the public which includes color coded probability percentages indicating the risk of M7 class earthquake occurrence in the next 30 years1). However, it is difficult to understand how to promote preparedness against upcoming MEGA earthquakes in the next 30 years from this hazard map. It would be unclear how to understand for example, 70% probability risk over the next 30 years in the Tokyo Metropolitan Area. The Japanese nation expects to receive long-term predictions with clear targets when the most serious earthquakes ate likely to occur, regardless of the correctness. Moreover, another problem is that the committee has not shown how to compute the probability percentage based on scientific rigor. No one can verify the hazard map with the corresponding probabilities for individual residential areas.

One of the largest worries for the Japanese nation will be future occurrence of MEGA earthquake in the Nankai Pacific Area (see Fig. 1) which, in the past is estimated to have caused about 300,000 casualties, if a similar MEGA earthquake and Tsunami occur as in the past, in 100 to 150 year cycles. Many people living in the 700 km along the Nankai Trough in the west to Sagami Trough in the east, would be anxious about their future, but not able to prepare specific emergencies measures when the probability for the next 30 years is only 80%. 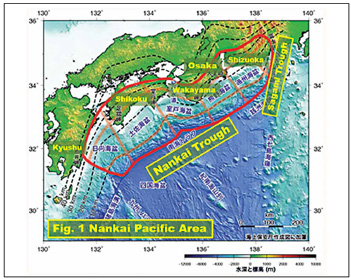 The authors of this paper have reconsidered the existing earthquake probability analysis methods using the mean and standard deviation based normal distribution of earthquake occurrences. As a result of this re-consideration, a prediction method based on yearly unit periodicity analysis with multiple combinations between past MEGA earthquakes has been developed as described in this paper.

Step 1: Select past records of MEGA earthquakes from the website such as for example, USGS site (https://earthquake. usgs.gov) based on a yearly unit. Let n be the number of the earthquakes selected.

Step 3: Calculate the multiple intervals T (i, j) between the year of MEGA earthquakes as follows.

Step 4: The year to be predicted for the next predicted MEGA earthquake is Y (n + 1).

Step 5: Apply a similar procedure as Step 3 and search the most likely risky year with maximum number of multiple yearly intervals.

Step 6: Check the same or multiple year intervals of more than 10 years at the Y(n+1) line and change the number to red color. Change the common periodical year number to blue color for years other than Y(n+1).

The results of cases studies in Japan

Table 1 shows the past records of MEGA earthquakes in East Japan including Kanto Area of Tokyo, Tohoku Area and Hokkaido.

Table 2 shows the result of a yearly unit periodicity analysis in East Japan.

We use different colors to show the numbers which have multiple relations.

It is concluded that the year of 2026 should be the most likely risky year for the next MEGA earthquake in East Japan, as the number of common periodical cycle years is a maximum. It should be noted that there are seven periodical cyclic years including multiple cyclic years, part of which are shown in blue. The numbers 43, 51, 78, 80, 88 and158 in red color, correspond to 1968, 1960, 1933, 1931, 1923 and 1853. If the long-term prediction method had been applied before 2011, we could have predicted that 2011 would be the most likely risky year, and we would have been able to reduce the impact of the 2011 Great East Japan Earthquake disaster which caused 22,000 casualties.

Considerations for the result

Although the long-term prediction method introduced in this paper is not verified on a scientific basis, this approach could persuade the Japanese people to be prepared for MEGA earthquake disasters because the method can show the risky years. It is much better and clearer than the Japanese Government’s longterm prediction in the form of xx% in 30 years in the future. Another benefit is that the proposed method will be available for anybody to calculate simply if the past MEGA earthquake record in the relevant area can be searched.

At least it can be said that the results obtained from three case studies in this paper seems reasonable for individuals to execute preparedness for their own risk of MEGA earthquakes. Otherwise, people have no other options than to believe the Government’s probability prediction without scientific evidence.

It may be surprising to know that there is a yearly periodicity for MEGA earthquakes as shown in this paper, which seems to be a strange coincidence. However, the cyclic anomalies occurring on Earth including earthquakes, volcanic eruptions or global change such as global warning may have been strongly influenced by the solar cycle such as sunspot 11 years cycle, as well as planetary orbital cycles of 12 years for Jupiter and 29 years for Saturn. In Table 2, the cycle of 58 corresponds to multiple cycles of the Saturn planetary cycle, 66 and 88 corresponds to multiple solar cycle4).

1. A new MEGA earthquake prediction method using a yearly unit periodicity has been developed by the authors.

2. The validation results of three case studies reveal that the most likely risky years for the next MEGA earthquakes are clearly based on a yearly unit, which will be helpful for preparedness against earthquake disasters in Japan.

3. The advantage of the long-term prediction method developed by the authors is very clear and simple for individuals to calculate the most likely risky years from past earthquake records. It would give individuals a free hand to believe or not their own risk.

4. The new method will be verified in future when case studies are accumulated in various areas.

We would like to extend appreciation to Prof. Emeritus Dr. John Trinder for his kind reviewing the contents as well as editing English. We also appreciate Mr. Toshihiro Kitta, President of JESEA for his kind supporting our research.