Unmanned aerial vehicle (UAV) is emerging to become a common tool in the geoscience field as it is usable across different field to cover a large-scale area with minimal cost. A low-cost UAV with low-altitude platform is advantageous as it is not affected by cloud cover and easily operable which allows the frequent flight of the same area at low-cost. This is applicable in monitoring effects of coastal erosion and shoreline changes. Coastal erosion is recognized as a permanent loss of land and habitat along the shoreline resulting in changes of the coast. The shoreline is highly vulnerable to erosion and flooding that can spawn negative impact on the wellbeing of human, vegetation, environment and ecosystem altogether. Hence, it is important to monitor shoreline changes by identifying the rate of erosion and accretion to quantify the losses of land due to climate change. This research suggests the usage of low-cost UAV namely DJI Phantom 3 Professional (Phantom 3) to monitor shoreline changes physically at Pantai Jeram. Sub nadir aerial images were taken from the UAV and flew alongshore at above ground level (AGL) altitude of 70 m. The study was conducted at three different months (May, September and December) in 2017 to observe the shoreline changes and vegetation changes during different monsoon periods. The result shows apparent changes of the shoreline and vegetation in the west coast of Malaysia produced at high-resolution because of the images taken by the UAV at lowaltitude which allows the observation of the shoreline changes and vegetation changes to be intricate. In Pantai Jeram, the result of 3-months observation shows noticeable changes in shoreline and vegetation. The research shows that UAV is applicable in monitoring changes along the coastal region which can be useful to assist the authority in deciding on enforcing nature conservation strategy to the affected site.

The UAV system is becoming a common tool in the geoscience field nowadays [1]&[2]. The emergence of new survey technique based on UAV system is becoming a common tool in the geoscience field. It is utilizable across the different field because it can cover large-scale area with minimal cost. With improvements in a camera system and an inertial measurement unit (IMU), UAV is advantageous to be used for photogrammetric surveying and mapping. The system can be mounted in highor low-altitude platforms providing a different advantage for both platforms [3]. Low-altitude system is advantageous in performing survey because it is not affected by cloud cover able to capture full image from above, and it can be used for frequent surveying of the same place at specific time compared to remotesensing technique, which can be affected by cloud cover and if it has, the time of image acquisition will have to be changed. An example of this situation is shoreline changes at the coast as an effect of global warming and sea-level rise. The shoreline is highly dynamic and highly vulnerable to erosion and flooding that can spawn a negative impact on the wellbeing of human, environment and ecosystem altogether.

Global warming is an observed centuryscale increase in the average Earth temperature. As an effect of global warming, the world faces a sea-level rise (SLR). Intergovernmental Panel on Climate Change (IPCC) conducted a study which resulted in findings in the 21st century; the sea level is projected to rise from 18 to 66 cm [4]&[5]. This significant increase in sea-level is identified as one of the leading causes to coastal erosion [6]. Coastal erosion contributes to the changes of the shoreline which can reduce the dunes and boundaries of the coastal area and significantly affect the vegetation at near coast area.

A study by National Hydraulic Research Institute of Malaysia (NAHRIM) states that Peninsular Malaysia will face rate of sea-level rise by 2.7 mm to 7.0mm per year; and within the range of 0.253 m to 0.517 m by the year 2100 concerning the year 2010 [7]&[8]. According to the National Coastal Erosion Study (NCES), Selangor is one of the places with potential to the coastal erosion. Hence, it is important to monitor the changes at the coastal area to strategize further action to mitigate the effects of sea-level rise in the area. Previously, the shoreline monitoring is done by using various techniques either direct measurement or indirect measurement.

High accuracy GNSS surveys are the most popular method but it can be costly, timely and requires a lot of manpower towards completion. Hence, in this study we propose the usage of lowcost UAV to monitor changes at the coastal area at high resolution to help enforcers strategize future actions.

This research is conducted in coastal areas in Selangor along the Pantai Jeram coast, which is located at the west coast of Peninsular Malaysia facing the Straits of Malacca. Pantai Jeram is a low-lying area between the latitude of 3° 13’ 33.762” North and longitude of 101° 18’ 17.761” East. The study area covers a coastal area where sand dunes are the majority material along the coast with vegetations and several man-made structures. Climate condition is affected by Southwest monsoon from April to September; and Northeast monsoon from October to March. This study will be conducted on June, September and December of 2017 to assess the changes at differing monsoons. Pantai Jeram is located as shown in Figure 1.

The data used in this study was obtained from Phantom 3 as shown in Figure 2. This UAV costs USD1000 at the time of launch and it has integrated GNSS positioning module, camera stabilization system, IMU, 12-Megapixel camera with f/2.8 lens and 94° field of view. Aerial images perpendicular to the ground were taken from it and flew alongshore at AGL altitude of 70 m to obtain data at the highest resolution possible while avoiding an obstacle on the ground. The flight plan drafted from MapPilot app included several parallel flight axes with an overlap percentage of the image at 60% endlap and sidelap. Figure 3 shows the flight path drawn and taken by using the MapPilot app.

GCP for aero triangulation of the images is observed at five different positions near to the beaches by using RTKGNSS receiver of Topcon GRS-1. The images were obtained from different temporal resolutions covering Pantai Jeram between May to December of 2017 to observe changes at different monsoon periods. Table 1 shows the data types, date and time of acquisition and the events during the acquisition based on Malaysia Tide Table of 2017.

By using Phantom 3, the operator only needs to be aware of the incoming weather condition as it can be flown at low-altitude which minuses the cloud-coverage factor when compared to the usage of remote sensing. UAV can provide estimates of change directly from the site itself and is a unique tool for coastal monitoring research. During high tides level, we can identify the areas that are changing, either erosion or accretion. According to the NCES 2017, when the images were captured during the peak level, the shoreline changes can be detected during that time.

By referring Malaysia Tide Tables, the prediction of high tides event can be predicted either time of acquisition or the height of tides level. 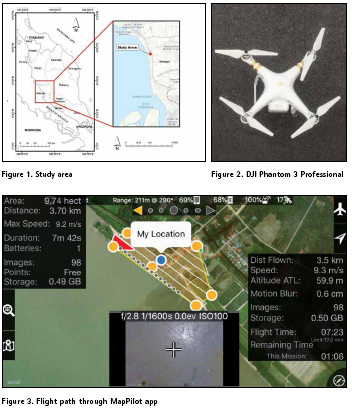 Aerial photos of Pantai Jeram obtained from Phantom 3 at different temporal conditions were used for observation of shoreline changes. From the series of aerial photos obtained, it is then imported into Agisoft PhotoScan, an image processing software which stitches images via Multi-View Stereo (MVS) concept. The software uses Structure from Motion (SfM) algorithm [9]&[10] to produce point cloud, dense cloud, mesh and texture. The spatial resolution of these photos will be produced later in the results. The aero triangulation via GCP allows the usage of the orthophoto for quantitative and qualitative analysis. Subsequently, orthophotos of the coastal area of Pantai Jeram is produced.

The result and analysis of the data are conducted after the data processing is completed. Based on the analysis from the UAV images, the shoreline changes are able to be monitored at high resolution achieving ground resolution of approximately 2.6 cm which can be considered finely detailed for coastal mapping. There were three photogrammetric results generated after performing the aerial triangulation process which is the orthophoto for three different months (May, September and December of 2017) at Pantai Jeram.

The images obtained from Phantom 3 were projected with a coordinate system of the World Geodetic System (WGS84). The most important part of this survey is the ability to analyze the changes in the coastal area. Figure 4 shows the changes of the shoreline of the three different months based on May 2017. Based on the above results, the UAV images show that September experienced the most changes in coastal settlements. The changes in vegetation area are also recorded in the differing months as shown in Figure 5. From the recorded changes in shoreline and vegetation, it is observed that the sea level rise is detrimental not only to the shoreline, but also the near coast as the vegetation area is also affected by it. The study that has been carried out proves that UAV is potential to be used for monitoring shoreline changes. With this finding, it is proven that UAV can be used to help the related departments to monitor changes and consequently, draft an action to be taken to help minimize the changes to coasts. Apart from vegetation changes, The following Figure 6 shows the decrease/increase of the shoreline. Conclusion This study has proven that low-cost UAV, specifically DJI Phantom 3 Pro, is utilizable for conducting a photogrammetric survey at the coastal area for shoreline monitoring. UAV is an autonomous vehicle operable via remote which is cost- and timepractical sufficient for the coastal area. This technology has advantages over land survey technique which can be costly, or remote sensing technique which can have cloud cover. This paper is completed after 6-months of survey works. The shoreline changes were monitored successfully based on the results obtained from survey flights. Hence, it is proven that lowcost UAV can be further used to help mitigate the effects of climate change. 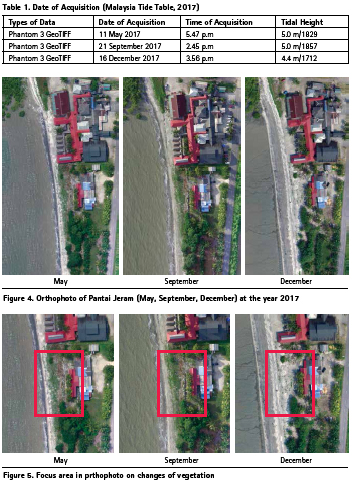 The paper was published in Proceedings Asian Conference on Remote Sensing 2018.