The Federal Territory of Putrajaya (Putrajaya) is the administrative capital of the Malaysian Federal Government with an area of 4931 hectare. It is divided into 20 precincts and consists of 10,580 land parcels. The Department of Survey and Mapping Malaysia (JUPEM) is a government agency responsible for the geodetic, topographical, mapping and cadastral surveys in Malaysia. JUPEM is also responsible for the demarcation and survey of the state and international boundaries.

The cadastral survey in Malaysia is based on the cadastral coordinated system. Steps have been taken to enhance the National Digital Cadastral Database (NDCDB) for Peninsular Malaysia (including Putrajaya) and Labuan with survey accurate coordinate system.

In the bid to understand the complexity and structure of a Multipurpose Cadastre (MPC) concept in Malaysia, a MPC pilot project has been conducted in Putrajaya.

The multipurpose cadastre concept was described as ‘a framework that supports continuous, readily available and comprehensive land-related information at the parcel level.’ The concept is expected to benefit all levels of governments and society. Increased sharing of datasets, public transactions of data and reduction of administrative costs are a few of the benefits foreseen.

A multipurpose cadastre is designed to record, store, and provides not only land records information but also a wide variety of parcel-object related information using large scale base map. It is truly multipurpose since it not only receives information and data from many sources, but it also provides relatable services and products for many purposes and to many users.

The scope of work for the MPC pilot project for Putrajaya is as follows:

– Development of an updated Local Geospatial Data Centre (LGDC) dataset with new large scale geospatial dataset and integrating it with the NDCDB;

For the MPC pilot project, the enhanced National Digital Cadastral Database (NDCDB) which is referenced to the Geocentric Datum of Malaysia2000 (GDM2000) through a dense Cadastral Control Infrastructure (CCI) serves as the fundamental reference layer. Consequently, the 2D Local Geospatial Data Centre (LGDC) dataset for Putrajaya was updated and referenced to the NDCDB. The other core data layer that has been developed for MPC Putrajaya is the 3D city model using 3D point-cloud data acquired through Mobile Terrestrial Laser Scanning (MTLS) technology. As such, the MPC system that has incorporated ‘survey accurate NDCDB’ and ‘survey accurate 3D geospatial data acquisition technology’ can be called a ‘survey accurate MPC’. 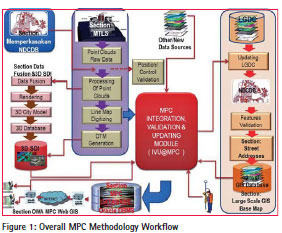 Furthermore, the State Geospatial Data Centre (SGDC) dataset available at MaCGDI for Putrajaya area has also been acquired to be integrated with the LGDC data. The SGDC data consists of various data categories such as Built Environment, Transportation, Demarcation, Topography, Vegetation, Hypsography, Hydrography and Utility.

MTLS is an emerging technology that combines the use of a laser scanner(s), the global navigation satellite systems (GNSS), and an inertial measurement unit (IMU) on a mobile platform to produce accurate and precise geospatial data. The data is initially adjusted by post-processed kinematic GNSS procedures from separate GNSS base stations placed throughout the project area. The GNSS solution is then combined with the IMU information to produce geospatial data in the form of point cloud. This point cloud is then adjusted by a local transformation to well defined points throughout the project area to produce the final geospatial values. Point clouds have been produced in GDM2000 coordinate system and vertical reference being reduced to Mean Sea Level (MSL) and National Geodetic Vertical Datum (NGVD). 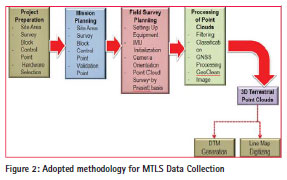 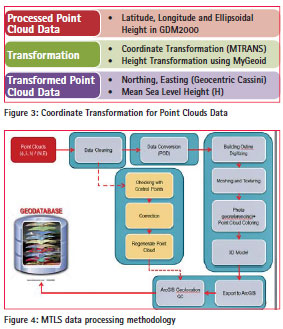 The top part of buildings in Putrajaya was not able to be scanned by MTLS survey. Hence, additional data provided by LiDAR and high resolution satellite images have been utilized to fill-up the gaps (roof top images). Detail on the adopted processing methodology for the collected MPC MTLS data is shown in Figure 4.

MPC Data Integration, Validation and Updating Module has been developed based on a desktop-based GIS development environment to extend GIS functionality, customize and automate repetitive operations, and integrate ArcGIS version 10 with VBA functionality.

Street addressing is to assign an address using a system of maps and signs that give the numbers or names of streets and buildings. Geocoding of Street Address database was based on the enhanced NDCDB and building feature acquired during data acqusition process. Enhanced NDCDB consists of cadastral lot information, Unique Parcel Identifier (UPI) and newly created object identification (OID). OID was also created for building feature. Based on the street address database, geocoding process can be conducted systematically using cadastral lot number, UPI and OID. These information can be linked to zip or postal method to generate street address based on integrated MPC GIS base map.

Present geospatial data acquisition technology coupled with the advances in geographical information system (GIS) and computer technologies enable the creation of 3D landscape models. 3D city models are the most widely created and used landscape models. They consist of Digital Elevation Models (DEM) of ground surface overlaid with structure and texture of buildings. Such models may be created at five levels of detail (LoD).

– LoD0: a DEM with superimposed ortho-rectified aerial or satellite imagery.

– LoD1: basic block-shaped depictions of buildings are placed over LoD0.

– LoD3: represent further expansion by adding to LoD2 structural elements of greater detail, such as facades and pillars, and draping all objects with photo texture.

– LoD4: the highest level, is achieved when the building can be virtually visited and viewed from the inside.

3D Model for Putrajaya has been digitized manually using Google Sketchup and exported to ArcGIS Map (Figure 5). This was then integrated to the database in ArcGIS Server. This project could be recalled via a client PC through ArcGIS Explorer Desktop.

3D City model visualization for Putrajaya integrates image textures for rendering process. This process generates virtual reality of the real world. Sketchup and ArcGIS Desktop Explorer software has been used to drape the related image to 3D city model as shown in Figure 6.

The 3D City model was generated from the MTLS and GIS Base Map data categories. Attribute entry has been carried out based on the available information obtained from the MTLS scanning. Data fusion from multiple geospatial datasets contains attributes information enriched the 3D city model for Putrajaya (Figure 7). LoD 3 is used for the Main Boulevard. Residential area in Precinct 14 is used as a pilot area for LoD 2 digitizing and overlaid with the current NDCDB. 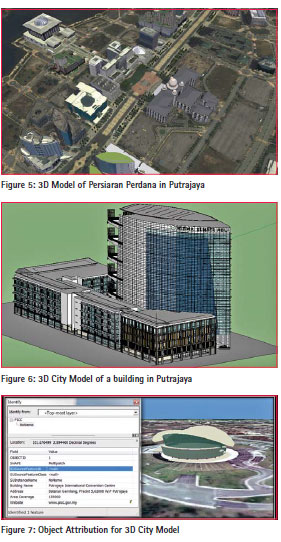 The MPC Database development is the core for the whole pilot project. It consists of the following main characteristics:

– 3D City Modeling for Putrajaya; and

Ubiquitous means the ability to have or seeming to have the ability to be anywhere at anytime. MPC-OWA means mechanism or system that could integrate all related information for a land parcel in order to provide maximum accessibility in term of location, time and method of access. User can access MPC information using various devices such as personal computer, handheld terminals and smart telephone that is connected to an online system.

The benefits resulting from the development and use of a MPC system has been recognised for some time. The MPC system that has been developed for Putrajaya incorporate some of the recent most advances in computer and GIS technologies as well as the latest MTLS 3D geospatial data acquisition technology. The MPC system that has been developed certainly will revolutionise the way large scale geospatial data is utilised in this country.

Findings and recommendations of the pilot project

The findings and recommendations of the MPC pilot project in the Federal Territory of Putrajaya are as follows:

– Survey grade MTLS system should be employed in 3D point cloud data acquisition to ensure higher level of accuracy and resolution of the acquired 3D features.

– The scope of cadastral survey should be enhanced to collect large scale geographic information such as building footprint, drain, fire-hydrant, access road, etc., and the features are to be updated into MPC Database.

– MPC Database should be integrated with the NDCDB and high-rise building database for data updating purposes. On the other hand, SOA concept should be used for updating information from other databases such as mapping databases, underground utility database and other databases from other agencies. – Priority should be given for the implementation of MPC in major cities in Peninsular Malaysia and Labuan in phases, followed by MPC implementation for semi-urban and rural areas with reduced resolution.

– Future marine geospatial and cadastral infrastructure should be incorporated in the MPC Database.

– Public assessment and feedback should be sought from other government agencies, private sector and the public to assess the relevancy of the MPC Database.

The MPC Pilot Project for the Federal Territory of Putrajaya has enabled JUPEM to understand the complexity in the implementation of the MPC for Malaysia. It is hoped that the findings and recommendations based on the pilot project will enable the successful gradual implementation of the MPC for the whole country. This will surely enhance the concept of spatially enabled government and society in Malaysia and fulfilling the nation’s vision.

Department of Survey and Mapping Malaysia – Final Report on the Enhancement of National Cadastral Database for Peninsular Malaysia and Labuan, November 2012.