Landslide comprises almost all the varieties of mass movements on slopes, rock falls, topples and debris flow that involve little or no sliding (Varnes and IAEG, 1984). Landslides are considered as a major natural geologic hazard occurring throughout the World. Landslide triggers instability to the land which disrupts the water pipe lines, road linkages, buildings as well as loss of human lives. Landslides are inevitable and quite common in tectonically active mountain chain where they annually recur during monsoonal events (Aier et al., 2012). Landslides are also increasing due to development activities because of increasing population, urbanisation, and infrastructural development. Identification and zonation of areas prone to landslide has therefore, become crucial to prevent and safeguard physical properties and human lives. Zonation of the land applies to division of the land surface into areas and the ranking of these areas according to degree of actual or potential hazard from landslides or other mass movements on slopes (Varnes and IAEG, 1984).

Identification of area susceptible to landslide is crucial since urbanisation is increasing with time. The spatial information related to the causative factor for landslide can be derived from remote sensing and geographical information system (GIS) techniques. GIS a powerful tool for integrating different data type has made some significant development especially in spatial data analysis (Rawat et al., 2015). High resolution satellite images (Quick Bird 2 and World View 2) have been used to delineate the areas affected by landslide and has been processed in GIS environment to bring out the hazard map. Landslide hazard map divides the landslide prone hilly terrain into different zones according to the relative degree of susceptibility to landslide (Marrapu and Jakka, 2014). LHZ provides information on the susceptibility of the terrain to slope failures and can be used for the estimation of the loss of soil due to slope failures, new construction sites and road alignment, for prevention, evacuation and mitigation processes (Talib and Napiah, 2000). LHZ techniques are classed into direct and indirect methods. Direct method involves the geomorphologist experience and terrain condition knowledge which directly determines the landslide susceptibility. In indirect method, statistical models or deterministic models are used to predict landslide prone areas based on information obtained from interrelationship between landslide conditioning factors and landslide distribution (Van Westen et al., 2003). Kohima, the capital of Nagaland located in the North-eastern part of India is situated in a tectonically active zone. The region comprises the intermediate hills of the Inner fold belt lying north of the Kohima Synclinorium and east of the belt of Schuppen and Patkai Synclinorium (Aier et al., 2012). Geologically unstable along with torrential rainfall in monsoon season has a huge impact on the distribution of landslides in Nagaland particularly, Kohima. 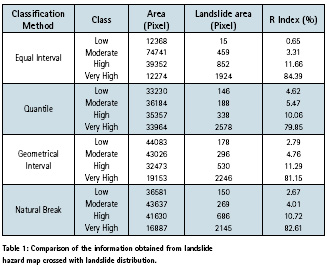 The study area- Kohima, capital of Nagaland is situated on the Inner Fold Belt characterised by Disang and Barail group of rocks, north of the Kohima Synclinorium (Srivastava and Pandey, 2011). The geographical extent of the study area lies between 94˚05’04’’ E and 94˚07’23’’E latitudes and 25˚38’28’’N and 25˚39’24’’N longitudes respectively covering an area of 14.03 km2 (Figure1). The study area consists of 19 town wards and the peripheral areas of the ward.

Kohima is located at an elevation between 800 to 1500 m above mean sea level. Annual temperature is moderate ranging from 5˚C in winter to 30˚C in the summer. In 2015, Kohima experiences annual rainfall about 1521.3 mm with 149 numbers of rainy days, precipitation is maximum in the month of June to August where maximum rainfall was observed in august with monthly rainfall of 374.1 mm.in 2015. Tectonically, it is unstable as it forms part of the Eastern Himalayas and also it lies in the seismic zone V which is liable to seismic intensity IX (Khatsu and Van Westen, 2004).

The process of urbanisation is progressing rapidly where population has increased from 77,030 in 2001 to 99,039 in 2011 according to Census report 2011. The population density of the study area is 7059 persons per km2 displaying a high density populated area (Figure 5(a)). The geographical growth of Kohima is increasing vertically as well as horizontally. The limitation of available land for constructing buildings has compelled the citizens to expand vertically despite the fact that it is geologically unstable. 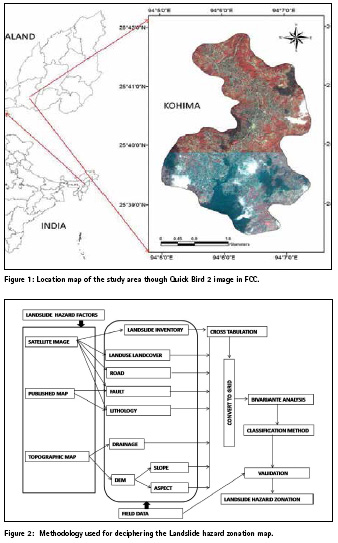 The main objective was to generate a landslide hazard zonation map. Thematic layers was generated from high resolution images for landuse landcover, road, landslide and also for fault and lithology, topographical maps was used for generating drainage layer and DEM to create aspect and slope maps, published maps were consulted for fault mapping and lithology mapping. The method chosen for delineating the landslide hazard zonation was based on statistical analysis viz- Information value method (IVM). The steps followed in the methodology are shown (Figure 2). The various thematic layers was generated in GIS based platform and crossed with landslide layer to generate cross tabulated weighted layers. The crossed layers were combined and classified by various classification methods. The classified methods used were natural break, quantile, equal interval and geometrical interval. The classified maps were crossed examined and validated using relative landslide density (R). The best classified method was considered for generating the landslide hazard map. 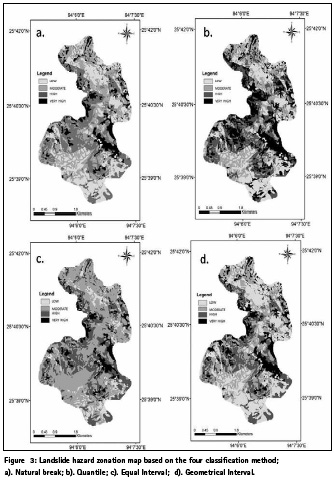 Data driven approach (statistical approach) has gain much popularity in the recent years because of its better subjectivity and more reproducible results. Statistical analysis is divided into two groupsbivariante and multi-variante statistical analysis respectively (Pardeshi et al., 2013). The main concept of bivariante is to determine the relationship between spatial landslide distribution and landslide controlling factors (Guzetti et al., 1999). Information value method is an important bivariante statistical method used in LHZ mapping. Potentiality of landslide hazard is based on the various causative factors and the relationship between them which triggers the slope instability (Sarkar et al., 2013). One of the simple and effective data driven statistical analysis for landslide study is IVM. 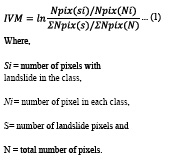 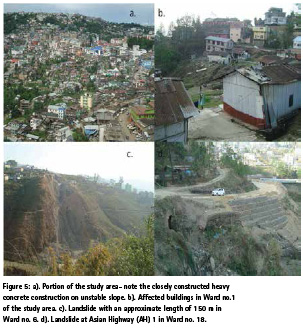 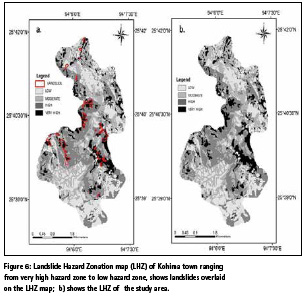 Slow creeping movement is observed in Ward 1 of the study area (Figure 5(b)). This particular area falls under Disang shales which is geologically a weak formation. The soil gets easily absorbed by rainfall causing more subsidence and creeping movement. The weak geological structural settings, heavy rainfall along with vehicular movement has caused landslide in Ward 18 (Figure 5(d)). This particular stretch of road is constantly paralysed owing to landslide almost every year. The area falls under very high hazard zone where the landslide is caused mainly due to geological structural failure as fault line passes though this area (Aier et al., 2011). The unfavourable geological settings coupled with heavy rainfall caused landslide in the study area. One of such landslide is shown in figure 5(c) which is in an army cantonment near the helipad. The steep slope along with little vegetation cover has exposed the land to slides and erosion.

The geologic formation in the study area is very weak been made up of crumpled and weathered shale’s (composed of Disang shales). Barail sandstone formation passes through a thin stretch of the study area towards the south western part of the study area which falls under low hazard zone. 䡔he occurrence of landslide is further triggered with anthropogenic activities particularly by building constructions which are built without any regulations. The scarcity of land has pressured the citizens to vertically expand their construction, further aggravating the danger of a catastrophic event in case of a seismic activity.

Landslides are diverse and their type varies from region to region with certain specific conditions. Hence, determination of landslide hazard zone is difficult depending on various attribute parameters as well as the type of model used. In this study, the statistical model used was Information value method for demarcating the landslide hazard zone. The application of high resolution image has increased the efficiency of the study. The generation of the thematic data’s using high resolution data has improved in better delineating the features. The use of various classification method and R index technique has improved the output by removing the insignificant variants.

The technique used in the study will however vary since the conditions will differ. The landslide hazard map was into four zone- low, moderate, high and very high landslide hazard zones respectively. The very high hazard zones was located mainly in the weak geologically settings. These zones should be avoided as they are unsuitable due to weak geologically unstable area and slope failure occurs in these places once it is triggered by rainfall. Anthropogenic activities should therefore be discouraged in this zone. Various scheme like afforestation and construction of retaining wall should be undertaken to minimise the slope failures. Since, the area being on very high hazard zone mismanagement will not only disrupt but also affect the other safer zone since the study area falls under high tectonic active area.

Srivastava, S.K. and Pandey, N., 2011. Search for provenance of Oligocene Barail Sandstones in and around Jotsoma, Kohima, Nagaland. Journal of Geological Society of India, 77, pp. 433-442.

Varnes D. J. and the International Association of Engineering Geology Commission of Landslides and the Mass Movements on Slopes, 1984. Landslide hazard zonation: a review of principles and practice . UNESCO, Paris, pp. 1-63