Tests of the HSGPS receiver

A car equipped with the four HSGPS receivers (see picture on the right upper corner of Fig. 3, antennas installed on the car roof) was driven around the Sydney CBD. Fig. 3 displays the tracks reported by the receivers (plotted on Google Earth). The two pictures on the right side show the test environment – high rise buildings block most of the sky. Under this harsh signal environment, HSGPS receivers could still provide reasonable solutions. The shape of the track is correct. The largest offset error is at the left upper corner where all the receivers report position with errors of over 100 metres – possibly caused by severe multipath. The average number of used satellites were 6.5 (ublox5), 6.5 (ublox4), 5.2 (SiRF) and 5.6 (Navman). Note that ublox also utilises SBAS (Satellite Based Augmentation System). In this test, two MTSAT (PRN 129 and 137) were tracked and used (if possible) in position calculations. This may explain the better performance of these two ublox receivers.

The tests of mobile phones were carried out for three scenarios: urban canyon, shopping centre, and an area under dense tree foliage. Four handsets were held by two persons walking along the same paths. The software “EasyTrails” was used on the iPhone 3GS and iPhone 4 for the tests; “Sports Tracker” from the Nokia Ovi Store was used on the N95, and a small application was developed for Windows Mobile, the HP iPaq device. 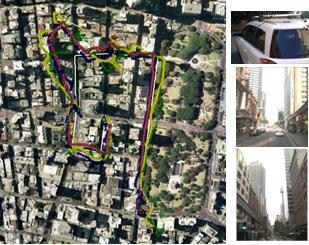 Fig. 4 displays the tracks obtained in the urban canyon test environment. Comparing with the kinematic test of the HSGSP receivers, this test environment is less harsh. The performances of the mobile phones were not bad – the maximum offset of the tracks reported by the handsets was about 50 metres. The effects of multipath disturbance were also evident. 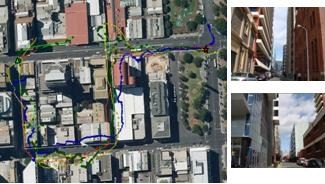 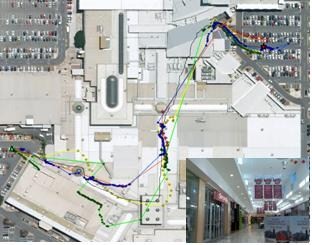 Figure 5. Kinematic test results of mobile phones in a shopping centre (symbols are the same as in Fig. 4, except real ground track – white); the right bottom corner shows the interior test environment

Fig. 6 displays the results of the test scenario under tree foliage. In general this scenario was less challenging than the other two. The green track generated by the N95 is close to the real ground track. Other handsets also performed well, with the exception at some places. As in previous tests, the iPhone 3GS provided sparse PVT solutions. The positioning result from the iPaq was quite variable, while that from the iPhone 4 exhibits an offset (of about 20 metres) at the beginning of the test which may be caused by multipath from a nearby multistory building. 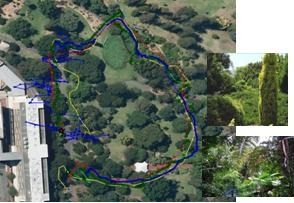 Figure 6. Kinematic test results of mobile phones in a forested area (symbols are the same as in Fig. 4, however there is no real ground track to provide “groundtruth”)

HSGPS receivers are widely used for many mass market applications. Under harsh signal environments, the HSGPS receivers can still provide PVT solutions, although the accuracy is not as good as in clear sky conditions. From the tests, one can observe that, in general, the newer receivers performed best. The performance of the receivers from different the manufacturers varies – one receiver may perform very well in one aspect, but not that as well against other criteria. There is no single clear “winner” on the HSGPS receiver market. However, with technological advances a better HSGPS receiver can always be expected to be released.

[22] Wieser, A.: High-sensitivity GNSS: the Trade-off Between Availability and Accuracy. Proceedings of the 3rd Symposium on Geodesy for Geotech. & Struct. Engineering / 12th Symposium on Deformation Measurements, Baden, Austria, 22-24 May (2006).