This article describes and evaluates the performance of two undergraduate student classes taking the Geomatics course at Universidad de los Andes. Geomatics is a science that studies geographic data collection and analysis, which has traditionally been an area of engineering and its teaching, has been through Cathedra and hands-on experiences. In general terms, Geomatics is an introductory course for engineers such as civil, environmental, and transportation, and for other areas such as, geography, architecture and urban planning. Geomatics courses are also basic courses in topography, cadastral engineering and Geodesic engineering, where it is delivered, not only at an introductory level, but also advanced.

Chart 1 shows examples around the world of Geomatics courses

In the case of Universidad de los Andes, the Geomatics course is mandatory in the Civil Engineering and Environmental Engineering curriculums, and elective in the basic cycle of the rest of the engineering programs. Currently, an average semester has 90 students in each section and an hourly intensity of 3 lecture hours and 3 practice hours per week, for 15 weeks.

Information and Communication Technologies (TIC, for its acronym in Spanish) are being increasingly used in teaching to promote autonomous learning through the incorporation of digital technology. As per Cabrero (2006), TICs configure new training environments and scenarios with relevant characteristics.

The use of technology in the classroom has been proven to improve pedagogy in matters such as guidance and tutoring, they bring down space-time barriers, ease collaborative work, and promote interactivity and flexibility in learning.

The inclusion of technologies in everyday life has an increasing impact in this century, thus education must adapt to new changes within a more globalized society, which is marked by the presence of communication technologies (Cabrero & Aguaded, 2003).

Even though there have been previous investigations to encourage the benefits of these technologies, (Reay, 2001; Rooney, 2003; Sands, 2002; Ward & LaBranche, 2003; Young, 2002; Osorio, 2010), the effectiveness in engineering courses with a high technological content, and taught to large groups (over 50 students) is still unknown.

Specifically, this research focuses on quantifying the impact of the use of videos for operating devices (instead of classroom demonstrations) and the use of clickers or technologies that allow for electronic participation in class. The use of these two technologies has the purpose of improving class participation and encourages the students to learn the materials by themselves outside the classroom, in order to implement a reverse pedagogy.

This article is divided into 3 parts. The first part presents the methodology used, including the tests used for assessment. The second part shows the case study and the results achieved. Finally, conclusions and recommendations for further research are presented.

Based on a pedagogical review of the Geomatics course, carried out by the education research group of Universidad de los Andes (conectate. uniandes.edu.co), it was found that the Geomatics course presented important characteristics to implement technology in education. Specifically, it was found that the size of the attending group (over 90 students) provided an opportunity to seek for alternatives to improve pedagogy in a large engineering course.

The decision to use this technological tool in the faculty of engineering was made based on the inconformity of the students with the lecture classes and the reduced motivation the students had to prepare the classes.

Likewise, the desire to implement educational enhancements to improve student and teacher performance at Universidad de los Andes, supported this research in the conectate. uniandes.edu.co group.

As previously stated, due to the conditions of the Geomatics course, student participation becomes difficult as a result of the theater-shaped classroom infrastructure and the size of the group (over 90 students per section). Also, using the various current pedagogical alternatives, two technological actions were drafted: material virtualization and the use of clickers

Regarding virtualization, we implemented playing back some introductory videos for the use of topographic devices, shown in class (altimetry level, total station and GPS). This pedagogic methodology is different from the previous lecture style classes, since, the teacher usually gathered the students outside the classroom and made a demonstration.

These videos were filmed with Professor Daniel Páez and had a carefully edited script to prevent missing functional concepts that were important for the students. Average video duration was 5 minutes while demonstrations took over 45 minutes.

Regarding clickers, the use of Learning Catalytics in the Geomatics course was provided, which is a commercial product created at Harvard University by Eric Mazur, Gary King, and Brian Lukoff. This software was purchased by Pearson in 2013 and used around the world since then, with results such as the development of critical thinking and communication skills.

In order to ensure that both sections had students with the same academic capabilities, the averages of all students were requested from the department, finding them similar, ranging from 3.6 to 3.8 for the semester in which the study took place.

As strategies to isolate the effects of the use of virtualization and clickers, the following was considered:

▪ The contents or class themes to be covered should be exactly the same in both sections.

▪ Tests, as well as their weight in the students’ final scores also had to be exactly the same.

▪ Tests were administered at the same time and under the same conditions for both groups.

▪ Students in each section were not aware of the differences in the pedagogies used.

From the investigative standpoint, the effectiveness of the use of technologies consisted of comparing the numerical results in the academic tests.

The course is divided into 5 modules, and assessed through lab practices, tests, and a final project. 3 tests were administered throughout the semester, as is usual for each course, to produce individual scores for each student, whereas the rest of the assessments are by group. The 2 first tests were non-cumulative and evaluated half of each module, while the third test evaluated everything covered during the semester.

Also, surveys were completed to determine student perception about the use of the pedagogical methodologies used in each group.

The survey given to the students asked about specific learning activities. These were based on prior experiences from literature (Conole, 2007; Marcelo, Yot & al., 2014), and covered aspects such as: satisfaction, interactive class, commitment and learning perception.

The evaluation scale of the survey was divided in 3 categories: Completely Agree, Neither Agree or Disagree, and Completely Disagree.

Comparing the Geomatics scores of both sections, shown in Chart 2, the average grades for the first two partial tests are very similar.

However, the performance of those students who used the Learning Catalitycs tool throughout the semester displayed a 15% improvement when compared to those who did not use it.

Specifically for the subjects assessed, there were differences, with higher differences in planimetry and altimetry. For the subjects of geographic information, the results suggest there was not a significant contribution. This is due to the video virtualization on how to set up and measure, using the topographic devices of the first part of the course, which were planimetry and altimetry.

Surveys applied to the students who used the technological tools show that 68% of the students fully agree with the evaluation of the 4 factors, as shown in the following graphs.

Graph 1 shows that more than half of the course significantly embraces the tool. There is a high percentage of satisfaction as a response to the implementation of Learning Catalitycs. 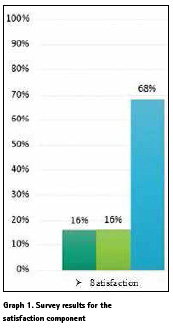 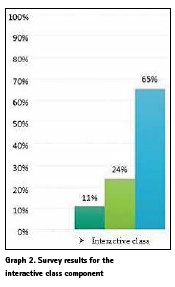 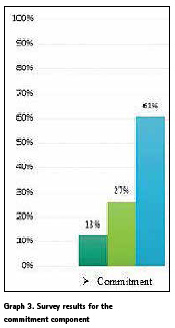 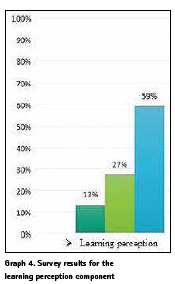 Similar to the answer for the satisfaction component, class interactivity increased by over 50%. This is due to the fact that Learning Catalitycs allows the instructor to ask the group quick text, graph, or even mathematical questions that the student must answer immediately and the teacher receives the results in real time. This encourages the student to prepare their class, since they will receive bonus points and the class becomes a more educational environment.

In this part, student commitment increases due to the motivation felt for the class. Innovation with this sort of tool focuses on the student’s attention and encourages engagement and responsibility.

Summarizing, the survey applied to the students that used technology, showed a considerable percentage, 63%, who stated that the use of Learning Catalytics aided in having a more interactive class.

The students also considered that the class time was more fruitfully used, due to the friendly interface of the program and they would like to see it implemented in more classes.

Figure 1 shows a summary of the survey results in each of the assessed aspects.

When the students were asked about the advantages obtained while using the tools, it was found that technical failures are the main weaknesses of the methodology.

Disorder, loss of time with the tool and the teacher experiencing problems when operating the tool, were also identified as weaknesses for the use of clicker technology.

Figure 2 shows a summary of the results of the survey regarding difficulties. 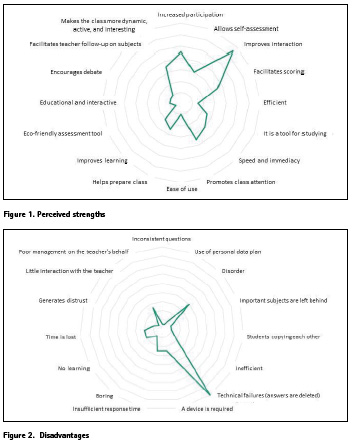 The study shows that the use of TC tools enables self-learning and promotes interactivity with the teacher in large sized classes. Likewise, Learning Catalytics is a user friendly tool that enables variety and a wealth of learning activities that few tools offer.

In order to use the Learning Catalytics, preparation is required regarding the questions that may contribute, to a larger extent, to a learning environment, in the short time that they are applied. Logistical challenges are inevitable when performing trials; however, once they are solved, it contributes to a reverse pedagogy.

Even though the tool does not generate a significant increase in test scores, it has many other positive effects such as: interaction with the teacher, increase in class engagement, and greater participation.

Finally, research based on massive stored information on different means, will bring along the key to determine how to approach teaching in a new era, and therefore, it is important to encourage the use of processes and techniques related to data analysis, such as “Learning Analytics”, because it offers the possibility to define an angle towards improvement, while strengthening the individual learning process.

YOUNG, J.R. (2002). Hybrid’ Teaching Seeks to End the Divide between Traditional and On-line Instruction. Chronicle of HigherEducation; 48 (28); A33.