Deformation analysis of the Balkan Peninsula from GPS data 2011-2016

The territory of the Balkan Peninsula is well known as a very active tectonic zone. Various geophysical, geological and geodetic methods and approaches have been applied to study and interpret the recent active earth crust movements [2], [6], [7], [9], [10] of the region. The present work is an extended geokinematics study not only for the territory of Bulgaria [13], [14] but it covers the territory of the Balkan Peninsula. Analysis and interpretation of the results obtained is based on the estimated station movements within the time span 2011-2016 from GNSS data processing and application of developed by the authors Finite Elements Method (FEM) for the space [13], [14]. The results of obtained relative deformations have been analyzed and mathematical-geometric interpretation has been performed. Suggested areas of extension (dilatation) and compression have been inferred.

For the majority of studies the FEM is mainly used in the analysis of movements of stations, which are results from GNSS data processing in order to be obtained strain tensors and strain accumulation [1], [3], [5], [12]. Since the Balkan Peninsula is relatively large region, the method of finite elements is developed by the authors specifically for the space. More detail theory of the developed method has been presented in [13], [14]. Below only the key points of the theory are given.

The territory of the study is covered by 33 GNSS permanent stations and 11 IGS GNSS permanent stations have been involved for referencing. On a tectonic map after Froizheim et al., 2014 [4], locations of the Balkan Peninsula GNSS stations are shown (Figure 1). Line AA’ is a line of cross section of the Hellenides and Rhodope Metamorphic Complex according to [4].

One week data from each year are used from all six years – 2011, 2012, 2013, 2014, 2015 and 2016. The data are processed with Bernese software, Version 5.0 in coordinate system ITRF2008. Obtained normal equations from data processing of each year have been combined in Addneq2 program of the Bernese software. Finally, the estimated station coordinates (X, Y, Z) and station velocity components (VX, VY, VZ) of all stations have been obtained by applying the least squares method with minimum constraint conditions for coordinates and velocities of 8 selected reference IGS stations in the system ITRF2008, referred to epoch 2005.0. The root mean squire (rms) errors of determined station velocities from data processing in north (VN) and in east (VE) components for all stations are 0,1-0,2mm/yr and for vertical component (VU) -0,2-0,3mm/yr. The estimated station velocity vectors in this study confirm their magnitude and directions obtained in previous investigations of the authors [13], [14], [15].

The relative movements of the stations with respect to the stable part of Europe (ETRF horizontal station velocity vectors in ETRF2000) have been derived from ETRF components of the Eurasia plate rotation pole [15] (Figure 2). The obtained horizontal station velocities vary from 0,3mm/yr up to 8,0mm/yr. For three stations (Brai, Alex, Nvrk) the obtained results are not reliable and they are not used in further analysis.

Analysis and discussion of deformations

The final elements (triangles) have been configured approximately as equilateral triangles with approximately equal areas and not overlapping.

Three main types of deformations have been determined for the time period of five years 2011-2016 by FEM: station displacements, relative side deformations and relative principal deformations.

Displacements and their directions for each station within the time span 2011-2016 are shown with solid red lines in figure 3. The stations in central and eastern part of the region have moved to the south-west with about 3cm except stations Burg and Ores which movement is small, about 3mm. Stations in the west area – Crai, Knja, Blag, Kava have moved to the south-east as the displacement of the first three stations is 0,5-1,4cm and Kava has moved with 2,5cm. Two of the most southwest stations Orid and Aut1 have moved with 3cm and 5cm respectively to the south-west. 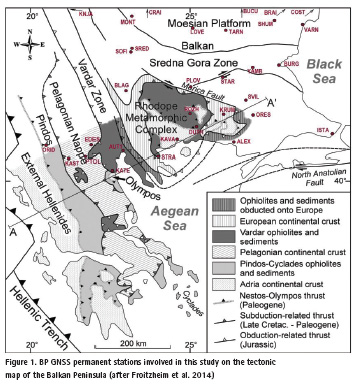 The relative principal deformations of each finite element are obtained by formula (9) and they are shown in figure 3 (compression in blue and extension in red). 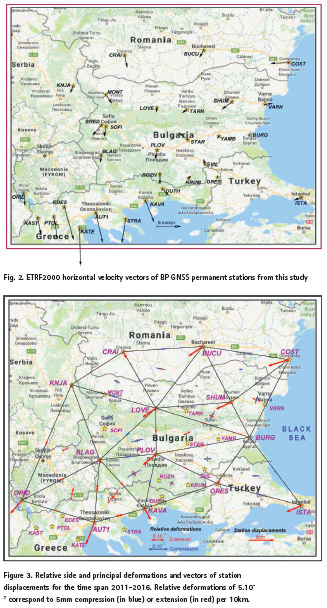 The finite elements method in space is applied for deformation analysis mostly of the central and southern territory of the Balkan Peninsula for the first time and it is an attempt to be applied another approach in surface geokinematics. The suggested areas of extension and compression and their analysis present a mathematical-geometrical interpretation of the movements of the Balkans region. The results obtained in this study cannot be compared directly to the strain rates results of other studies of the Balkan Peninsula due to the different nature of the approaches.

We would like to thank the team of IPOS Ltd. for kindly provided us all necessary BULiPOS GNSS data for the processing.