With fully operational GLONASS, scope for use of Multi-GNSS has increased as GLONASS may be used along with GPS. This paper describes a study from India on the use of GLONASS with GPS for position solution. Increasing number of GLONASS satellite signals were used sequentially with 4 or more GPS satellites to explore the contribution of GLONASS in position solutions. It was found that sequentially increased number of GLONASS signals proportionally improved the achievable accuracy in GPS+GLONASS solutions for lower number of GPS. For higher GPS numbers, the effect is less prominent. The results may be helpful in exploring the importance and advantages of Multi- GNSS for unaided, low-cost, medium to low accuracy applications in degraded satellite visibility scenarios and calls for better GPS-GLONASS interoperability for robust Multi-GNSS operations.

Currently GLONASS is the only alternative to GPS as a fully operating global satellite based navigation system after its revitalization since late 2011 [1]. As a result, user efforts are ongoing to avail the benefit from both the systems together, specifically for the Asia-Oceania region [2-4]. Therefore from India, use of Multi-GNSS is an interesting option for satellite based navigation due to expected high number of such signals [5] using commercial geodetic receivers capable of using GPS and GLONASS signals together. This paper describes an experiment and the results to explore the contribution of GLONASS in improving position solution accuracy, while operating with GPS. The experiment has been done from a fixed station located at The University of Burdwan, India. The results obtained suggest sequential improvement in stand-alone, unaided position solutions using increasing number of GLONASS satellites together with a fixed number of GPS signals for solution for lower number of GPS.

To find out the effect of GLONASS in MIX mode of operation, firstly 2 dimensional (2d) and 3 dimensional (3d) errors for individual solutions are found out w.r.t. a predetermined reference point following the method as described below. Very long-time GPS-only position solutions for the same experimental set-up are collected together and averaged; the average values are taken as the reference point of the antenna with latitude (La 0), longitude (Lt0) and altitude (h0) [6].. Using these predetermined reference position coordinates, the instantaneous errors in latitude, longitude and height associated with each observation were found out. Then 3d and 2d errors for individual instantaneous solution were calculated in meters using Equations 1 and 2. It is assumed that 1 minute of arc of the earth curvature is equivalent to 1,852 m. 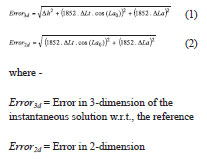 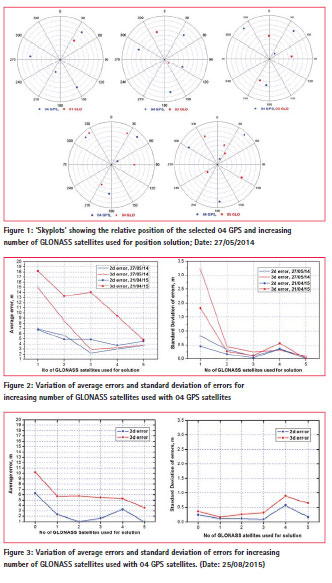 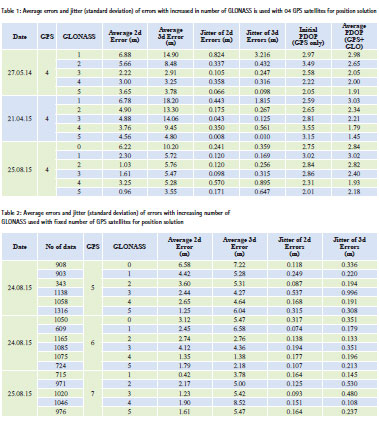 The experiment begins with a set of 04 GPS and increasing number of GLONASS. GPS and GLONASS satellites selected for observation are shown in Figure 1 (skyplots) for 27/05/2014, wherein the relative positions of the selected satellites are shown to provide idea about the satellite geometry. Here the azimuth angles are shown along the circumferences of the circles in a clockwise direction- the top showing 00/ 3600. The elevation angles are shown radially with the centre of the circle as zenith and the circumferences represent the horizon. Similar observation procedures were followed for other days also. Results for variation of 2d and 3d errors in solution for the set of 04 GPS and increasing number of GLONASS satellites for three observation days are shown in Table 1 and in Figures 2 and 3.

The results implies decrement of average error and standard deviation of error values with increased number of GLONASS signal contribution with 04 GPS , improving the position solution accuracy in 2d and 3d. Figure 3 also shows the benefit of using GLONASS over GPS-only operations (when no GLONASS is used). Varying error-levels for the different days may be attributed towards the selection of available satellite sets with different geometries during individual observations. Another interesting feature observed is the slight increase of jitter values all observation days when 04 GPS and 04 GLONASS satellites are used together. 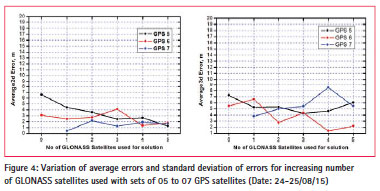 Next phase of the study involves use of sets of 05 or more GPS satellites for position solution with increasing number of GLONASS to observe the contribution. The data collection procedure and analysis methods remain the same as described earlier for the set of 04 GPS satellites. Care has been taken to select and maintain modest PDOP values for the selected set of satellites used during the data recording periods. Generally, such conditions could be maintained for duration of approximately 15 minutes. Results obtained for average 2d and 3d position errors, and the standard deviation of errors (jitters) for each set of data are shown in Table 2 and the variation of average error values are shown graphically in Figure 4. It may be initially observed that use of at least one GLONASS satellites with GPS helps in improving solution accuracy as has been observed earlier also. For up to 5 GPS satellites, the beneficial effect of GLONASS can be clearly observed beyond which (06 or more GPS) gradual improvement of accuracy with increasing GLONASS becomes less prominent. For these cases, use of more than 03 GLONASS does not improve the situation much. However, the values presented in Tables 1 and 2 point towards the improvement of accuracy due to the GPS+GLONASS mode of operation using a large number of available satellites. The results supports the idea of using GPS+GLONASS together over single-constellation operations for various stand-alone, single-frequency and mass-market applications [7].

Presented results here firstly show the advantages of Multi-GNSS (GPS+GLONASS) over single-mode operation providing improved solution accuracy in stand-alone, unaided operations. Presence of GLONASS, in general, supports to obtain better solution accuracy. The study also indicates that, when low number of GPS satellites are augmented with GLONASS, favourable improvement of solution accuracy is observed. Combinations of higher number of GPS satellites with increasing number of GLONASS though do not present similar benefit for improvement of solution accuracy. This may be attributed to the differences of GPS and GLONASS reference frames and other associated interoperability issues; the findings calls for better resolution of this problems to fully exploit the advantages of Multi-GNSS environments.

[6] Banerjee P, Bose Anindya and Dasgupta Ashis, The Usefulness of GLONASS for Positioning in the Presence of GPS in the Indian Subcontinent, The Journal of Navigation, Vol 55, 2002, pp 463 – 475