A report on GNSS performance standards

We are in a significant transition period as new satellite navigation service providers move from initial operation to full operation over the next several years. While each system provides similar services, these services differ in implementation and capabilities, in signals, codes, navigation data, data authentication levels, and ancillary services. Satellite navigation service providers issue documents that describe the service they are providing with commitments on the level of service that users can expect. These include core performance standards such as accuracy, availability, continuity, integrity, and coverage. 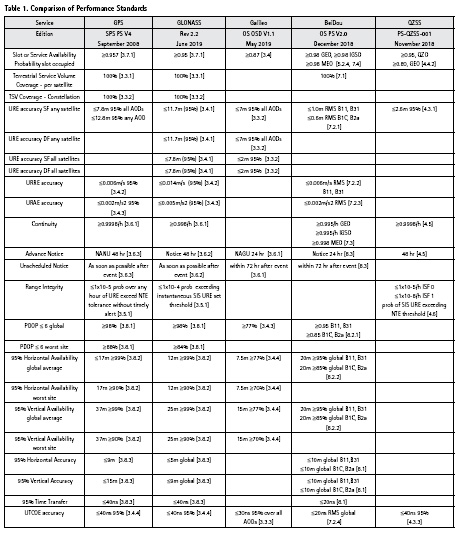 When the United States first offered a global navigation satellite service through its Navstar Global Positioning System (GPS), it became clear to leadership that for its open service to be adopted by users, written commitments of the service were required. This began with a publicly available interface control document, “Navstar GPS Space Segment / Navigation User Interfaces”, ICD-GPS-200, released January 25, 1983 (ICD-GPS-200V1, 1983). While this described the format and content of the open service signal, it did not describe the performance levels that the service would provide.

During the same year GPS reached initial operational capability in 1993, the U.S. Department of Defense issued its first statement of open service, called the Global Positioning System Standard Positioning Service (SPS) Signal Specification (GPSPS1, 1993). Contained in the document was a letter stating that the signal specification defined “GPS services provided by the Department of Defense to the Department of Transportation to support the needs of civil users.” The document included a statement of policy for the provisioning and usage of the system, system overview, and detailed description of ranging signal characteristics. It also included an annex specifying the Standard Positioning Service, including coverage, service availability, service reliability, and positioning & timing. Later versions appeared at subsequent key points. Version 2 was published in 1995 to coincide with full operational capability (GPSPS2, 1995), Version 3 in 2001 to report amended service levels following the turn off of selective availability (GPSPS3, 2001), and Version 4 appeared in 2008 (GPSPS4, 2008). A Version 5 is in development to specify new services, including possibly the L2C and L5 frequencies and codes.

Other satellite navigation service providers also issued their own service standards, and today we have the following:

The value of standards

To support safety-of-life applications, space and ground-based systems have been developed to augment the services provided by the core GNSS services. The Wide Area Augmentation System (WAAS) is one such system that augments the GPS SPS by broadcasting differential correction messages through GEO satellites and supports signal integrity by transmitting integrity data in the WAAS messages, thereby making the augmented GPS Standard Positioning Service a trusted air navigational aid. Putting this another way, WAAS could not offer its service levels without a corresponding commitment from the GPS SPS. When the WAAS performance standard was issued in November 2008, then Federal Aviation Administration GNSS Program Manager Leo Eldredge explained, “For civil aviation purposes, we depend on the commitments contained in the SPS PS as the basis for our commitment to provide service through augmentation and the approvals for aviation use of standalone GPS. Before we could approve use of L5, for either standalone use or as part of an augmented service, the commitment to provide that service would first need to be provided by DoD in a [Performance Standard].” (InsideGNSS, 2008).

This section applies if positioning is provided as a service.

The inevitable question one asks after considering these published performance standards is, are the service providers meeting their commitments? For several of the systems, the answer is generally yes, although insufficient data from monitoring and assessment services for each of the GNSS/RNSS is available to be conclusive. Both GPS and Galileo publish regular reports assessing performance against their standards. As early as 1993, the United States Federal Aviation Agency (FAA) began to publish quarterly performance analysis reports which scored the GPS performance against the existing standards (FAATC). In 2013, the U.S. Air Force began issuing public reports by the University of Texas Applied Research Laboratories that analyze GPS Standard Positioning Service performance (ARL:UT, Analysis of GPS SPS Performance ). In 2017, the European GNSS Service Centre (GSC) began publishing a quarterly assessment of Galileo initial operational service (GSC, Quarterly Performance Report).

• January 2016. Fifteen GPS satellites broadcasted erroneous values of the UTC offset correction term in their navigation message for a period of over 12 hours. As a result, thousands of digital radios and communication networks around the world went off line. The satellite operators were made aware of the problem, and they restored the signals to normal operation. In its report for the period, the University of Texas Applied Research Laboratories said, “Several GPS satellites broadcast flawed UTC offset information on 25-26 January 2016. The flawed data included tot values that did not satisfy the allowable range criteria. Therefore these data were not considered in this process. No values exceeding the NTE [not-to-exceed] threshold were found in 2016.” (ARL:UT, Analysis of GPS SPS Performance for 2016, 2016)

• July 2019. All satellites in the Galileo constellation were disabled from service for six days due to a technical incident related to the Galileo ground infrastructure. The satellite operators eventually were able to correct the problem and bring the service back online for its users. In its report for this period, the GSC reported only on a violation of UTC availability, but no violation of positioning service availability. The GSC said, “During this quarterly reporting period, the measured Galileo Initial Open Service performance figures exceed the Minimum Performance Level (MPL) targets specified in the [OS-SDD], with the exception of the UTC availability MPLs in July.” (GSC, Galileo Initial Services Open Service Quarterly Performance Report, 2019Q3)

GNSS service providers are to be commended for providing performance standards, and verifying they are being met. With multiple constellations, there is an opportunity to learn from one another and improve the service commitments.

Multiple GNSS systems and services are being implemented to meet national goals. While offering largely the same service of positioning and time, these GNSS systems also provide independence and redundancy, which is invaluable to PNT users. They also provide a degree of competition, which spurs providers to improve their own services. In the next few years, I believe that all GNSS and RNSS will have documented performance standard commitments, and to a great extent, these performance standards will conform to the guidelines set by the International Committee on GNSS.

I also expect that every service provider will begin to assess and publish its performance against these standards. My hope is that as this information is shared, there will be motivation to tighten up the performance standards, so that no single GNSS falls behind the others in providing reliable and accurate service to their users. This, of course, will be to the benefit of those who rely daily on these multiple GNSS/RNSS services.

This article solely reflects the views of the author. The author gratefully thanks Brent Renfro for his help in proofreading the manuscript and providing guidance on clarifying the technical wording.