Where navigation meets the world

The Munich Satellite Navigation Summit 2010 was held from March 9 – 11 in the famous Residenz Munich, traditionally organized by the Institute of Geodesy and Navigation of the University FAF Munich. Prof. Bernd Eissfeller, Director of the hosting Institute, was delighted to welcome 450 attendees from about 25 nations.

This year´s motto “GNSS – quo vadis?” dealt of course with the growing global interest in GNSS as much as the rush in developing Satellite Navigation Systems all over the world. But where is GNSS going – what decisions should be made to improve technical, political, financial and even global social matters? The guests of the Opening Panel in the beautiful Court Church of All Saints addressed these issues with their interesting views..

Galileo must become a success

Prof. Klaus Dieter Scheurle, Permanent State Secretary of the German federal Ministry of Transport pointed out that it is a non-negotiable German position that Galileo as first EU project of such a large dimension must become a success. But Scheurle drew also attention on the fact that international cooperation is the only way that can guide satellite navigation to success.

Prof. Johann-Dietrich Woerner from the German Aerospace Center (DLR) started by asking whether Galileo is a never-ending story. Then he mentioned the outstanding importance of Galileo in the field of air traffic control and logistical innovations, in particular with respect to electrical mobility, because mobile energy storages may in future substiute the current way of energy provision. Paul Verhoef, Programme Manager of EU Satellite Navigation programs at European Commission made clear:

“I hope for my part that [Galileo] is a never-ending story. If it is an ending story, I think we’ve had a problem on the way.” Verhoef stressed the fact that users had to be won and this being the real challenge for the project.

The program went on with topics like GNSS Program Updates, Safety of Life: Realizing the Vision?, Knowledge and Technology Transfer in GNSS?, Big Brother is watching you! – Privacy Issues contra Satellite Navigation?, Bridging the Gap – A Journalistic View on Progress and Problems of GNSS, etc.. 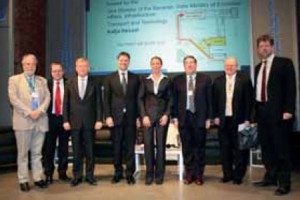 The closing session of the Munich Summit titeling Bridging the Gap – A Journalistic View on Progress and Problems of GNSS was an absolute journalistic session which dealt with the question if GNSS already arrived in public. Bal Krishna, editor of Coordinates from India pointed out that the problems in India as a developing country are very different from the problems of developed countries. Missing maps are making positioning nearly useless and new technology is viewed more as a bad ghost than as an improvement. Glen Gobbons, editor and publisher of Inside GNSS was convinced that the name GPS will continue representing satellite navigation in the mind of the end users for a long time.

Christina Teuthorn, political editor of the BR, a very famous German radio station, agreed with Gibbons. She found out that the word GNSS does not appear in the archives of her company. Contrariwise there are many search results for GPS. Alan Cameron, editor in chief of the GPS world hold the view that the world as a whole is not ready for new GNSS applications. It is ready for the old ones..

As in the last year the traditional Summit exhibition was fully booked. The attending companies used the opportunity to present their innovative products and activities in the charming atmosphere of the Residenz Munich. The Bavarian State reception as well as the Summit Space Night afforded the opportunity of making top-quality networking.

The next Munich Satellite Navigation Summit will be held from March 1-3, 2011. Register in time & get more information on www. munich-satellite-navigation-summit.org