For space faring nations or group of nations, maintaining their autonomy in the engineering of technologies allowing the success of exploration missions is mandatory. This article focuses on one of these technologies – the flash imaging Light Detection and Ranging (LiDAR). This technology has unique features that will allow the success of future complex space exploration missions.

Placing in-orbit of the targeted celestial body an orbiter – like the Mangalyaan Mars probe recently launched by India – is a first important step towards the exploration of this body. However, the most difficult part of the exploration comes with the missions that shall drop off at the celestial body ground either expensive scientific payloads or human beings.

The smooth landing of the rover Curiosity on Mars in the frame of the NASA Mars Science Laboratory (MSL) (http:// mars.nasa.gov/msl/) mission in August 2012 with a precision never previously achieved is a remarkable example of what can be accomplished by autonomous exploration space crafts. In the near future, several planned European or international exploration missions (e.g., Mars Sample Return, Marco Polo-B) (http:// sci.esa.int/marcopolo-r/49559-spacecraft/) also include a phase of controlled descent and soft-landing with even higher precision requirements. Their success stands largely in the ability to perform Terrain Relative Navigation (TRN) and surface Hazard Detection (HD) as these missions will land in areas pockmarked by craters, crevasses and boulders. 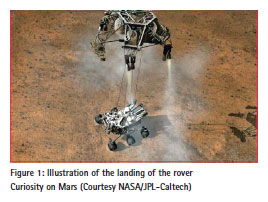 The landing of Curiosity was possible mainly because of the precision of the distance measurements achieved by the Terminal Descent Sensor (TDS) embarked on the sky-crane which dropped off Curiosity smoothly on the ground. The TDS is in fact a radar equipped with 6 directional antennas. Its main features and functionalities are mentioned in table 1. 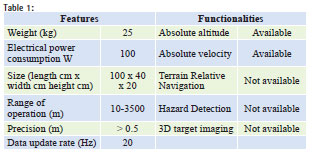 The TDS allowed the landing of Curiosity in an ellipse of 20 by 7 km. Even though this is the best landing precision ever achieved, it is not sufficient to ensure the success of exploration missions currently planned by the space agencies around the world.

For exploration spacecraft, autonomy is the key functionality, when the aim of the mission is a smooth landing on a faraway celestial object where remote commands from Earth to Mars needs at least 3 minutes and 7 seconds to reach the exploration spacecraft. This is by far too long to ensure the success of a mission where some sub-phases of the entry, descent and landing last only a few seconds. 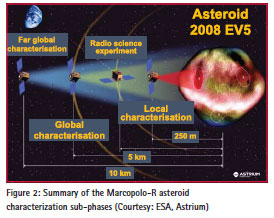 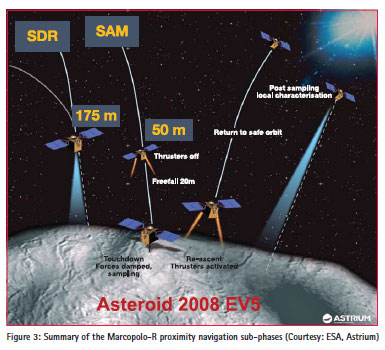 New requirements are surfacing in relation with the ambitious objectives of new exploration missions. An example of such a mission is the Marcopolo-R mission planned by the European Space Agency (ESA). The mission’s main objective is to collect ground samples on a Near Earth Object (NEO) and to bring them back to Earth.

The scenario of Marcopolo-R is split in several sub-phases either focused on the characterization of the asteroid or on the landing and on the collection of samples. 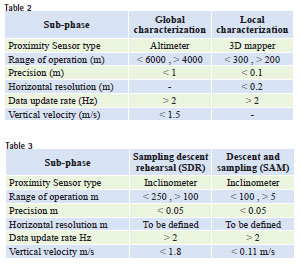 • The maximum mass has to be divided by a factor 6,

• The power consumption has to be decreased by a factor 3,

• The total size has to be decreased by a factor 4,

• At the same time, the ranging precision has to be improved by a factor 50.

In addition to these performances, allowing a precise relative navigation spacecraft-asteroid and making precise topographic and geodesic characterization, the proximity sensor must provide surface hazards detection and avoidance capability. A device with such capabilities will play an essential role for the success of NEO space missions. A proximity sensor with the features above is technologically not mature today to be embarked on a mission to Mars in the close future.

It appears to the space community that a sensor with such features can play an important role in other space applications. Applications often quoted are- rover navigation (as a replacement for the stereo-vision camera used so far), situational awareness sensor and rendezvous-docking operations.

A new space application can make profit of the proximity sensor with the features quoted above- the Active Debris Removal (ADR). ADR missions will become more and more important in the future to maintain an access to space at reasonable risks.

The numbers are breathtaking. Today, amongst the objects orbiting the Earth in the geostationary orbit, 70% of them is garbage. It represents 958 objects in January 2013 (Space News October 28 2013). Collisions between debris and active satellite already happened in Low Earth Orbits (LEO).

The remedy to the situation illustrated on the left above where the sustainable exploitation of space would not be possible is to send ADR missions. ADR missions will allow reaching the situation depicted on the right where debris are either parked in specific garbage orbits or destroyed in the atmosphere through controlled de-orbiting. ADR missions are split in three main phases- the rendezvous phase between the chaser (the spacecraft sent to catch debris) and the debris, the capture phase where the chaser catches the debris and the orbit-change phase. For each of these phases, enabling technologies must be used to achieve the necessary operations. There is currently a consensus in the scientific community for the identification of the technologies that will allow the success of ADR missions. They are listed in the figure below. Visionbased and LiDAR are the top ranked technologies for proximity navigation. 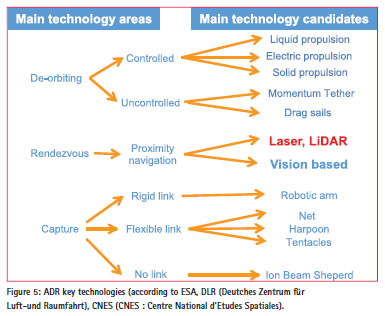 LiDAR – or more precisely imaging LiDAR, is the technology which offers all the features of the adequate proximity sensor. Other technologies propose only a subset of them (e.g., radar, passive camera).There are two families of imaging LiDAR technology- the flying spot and the flash technologies. The first step in the design of an imaging LiDAR is the choice between the flash and flyingspot architectures. Considering the optical budget, the available optical power from the illumination source is spread in larger solid-angle in a flash architecture (http://www.fosternav.net/), implying more demanding constraints on the detector sensitivity to maintain equal ranging and imaging performances with flying-spot architectures. However, considering system’s complexity, flash architectures makes it possible to avoid the scanning subsystem of the flyingspot architectures. The progresses in major flash LiDAR subsystems, e.g., in miniaturized high energy pulsed lasers, compact microchip lasers, continuouswave laser modules and photodetector arrays makes this LiDAR architecture a solution that will become the most relevant to address the tough challenges of future space missions.