The most basic operation of a vessel monitoring system is to determine the location of the vessel at a given time, and periodically send this information, usually by satellite, to a monitoring station ashore. Most of vessels are tracked using the purple finder. This finder uses various satellites like Inmarsat, Globalstar and Thuraya for tracking the vessel. INMARSAT-C has been the most considered choice, since INMARSAT transceiver is already fitted onboard many ocean-going vessels as required by GMDSS (Global Maritime Distress and safety System).

The carriage and operation of VHFbased Automatic Identification System (AIS) onboard vessels, as required by the revised SOLAS (Safety of Life at Sea) international convention, has greatly improved the identification and tracking of vessels in coastal waters. However, it needs to be extended in coverage, at least over the entire EEZ (Exclusive Economic Zone). It is also adopted as an Automatic Location Communicator (ALC) in the VMS (Vessel Monitoring System) of many regional fishery management organizations (RFMOs) and countries. Implementation of the long-range mode of AIS with INSAT- 3C satellite communication and the multipurpose performance of such a system is discussed in the paper.

The designed ship track system as shown in figure 1 is installed in NIOT research vessel. Data logger collects the date, time and positional details (Latitude, Longitude) from the in-built GPS transmits, and transmits the GPS details through INSAT-MSS modem using serial (RS232) port. Reception hub receives the data from MSS transponder on INSAT-3C satellite. The hub sends the data to NIOT mail server. Data reception software running on server checks the mail server continuously and shows the exact ship location, generates *.kml (Keyhole Markup Language) file depending on the period selected, calculates the average ship speed and generates a back up of the data in database for future use. 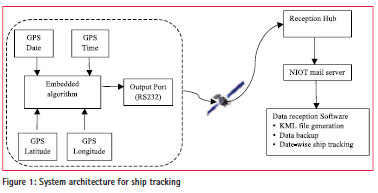 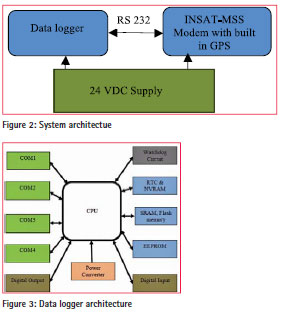 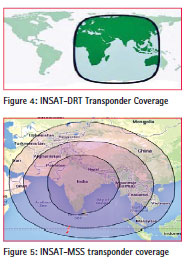 Depending on the frequency of operation, INSAT modems are of 2 types, namely INSAT-DRT and INSAT-MSS. 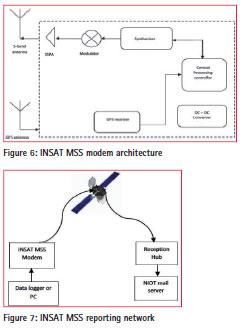 INSAT-MSS:- INSAT-Mobile Satellite Services works in S-band (2.6 GHz). Modem transmits the data to the satellite and the same is been received in hub in C-band. INSAT-MSS has a less coverage compared to INSAT-DRT as shown in figure 5.

INSAT-3C satellite has a wide coverage of India mainland, Bay of Bengal, Arabian Sea and Indian Ocean. The modem used in this paper works in inner lobe area only covering Indian mainland, Bay of Bengal and Arabian Sea due to a small antenna dish and less transmission power apt for scientific applications. Antenna size and power consumption should be minimal for easy installation, maintenance and longer system life in remote locations.

Both modems work in TDMA (Time Division Multiple Access) mode. In this paper, INSAT-MSS modem is used for ship tracking. In the next section, INSATMSS modem architecture, the reporting network has been explained in detail.

The details of INSAT-based modem are explained in detail in following section.

Central Processing Controller (CPC) controls the modem hardware and GPS receiver data. The DC to DC converters keeps the output voltage level (9–36VDC) to the required voltage level irrespective of the load. The GPS receiver is used to collect date, time, latitude and longitude and stores in to CPC. Binary Phase Shift Keying (BPSK) is digital modulator scheme that conveys the data by changing or modulating the phase of reference carrier signal. The Synthesizer generates required range of frequencies from a single fixed oscillator to lock the frequency to transmit the data.

The analog part of INSAT modem has been designed with Solid State Power Amplifier (SSPA) which takes advantage of current cutting edge technologies in both design and manufacturing, thereby resulting in high reliability, high performance and cost effective alternative to the Traveling Wave Tube (TWT).

All these sub-systems are housed in an IP65 enclosure suitable for marine conditions. The power supply and interface connector are located outside of the terminal. Users can configure terminal ID, frequency of operation by using RS-232 interface. MSS terminal operates in TDMA (Time Division Multiple Access) mode which has unique ID code operated in S-band and transmits messages at 300bps. The INSAT MSS modem works in S-band at a frequency of 2.6 GHz with down-link in a C-band.

Data logger sends the data through RS-232 to INSAT-MSS modem for transmission which is received by the INSAT-3C satellite. The Reception hub receives the data from satellite and sends it to NIOT mail server immediately without delay as is shown in figure 7.

A control string ‘@#N’ is required at the start of data to transmit and avoid false triggering. To receive the latitude, longitude, date and time from the built-in GPS, the command is ‘@#G’. The power consumption during idle mode of INSATMSS modem is 40mA. The idle mode current of satellite modem contributes a major part in the power budget while sizing the communication system, as this modem is idle for most of the time and transmission takes only a few seconds with peak current. The details of INSAT-MSS power consumption and cost are shown in table 1 which also indicates that INSATMSS is economical compared to Iridium, which needs about Rs 40,000/month. 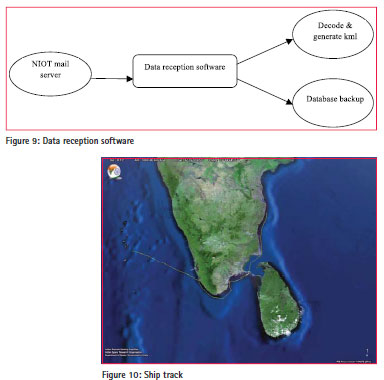 Data reception software runs continuously on server computer. It receives the data from the NIOT server, decodes it and generates the .kml file showing the ship track as shown in figure 9. The software features are to calculate the distance traveled for the particular selected period, GPS data backup for future reference, continuous ship tracking, etc. In future, the software can be upgraded to calculate the average speed, Expected Time of Arrival, sending Vessel position reports through SMS, E-mail, etc.

Track ship setup was installed on Coastal Research Vessel Sagar Purvi in Chennai, India. INSAT-MSS modem was installed on the top most location in the ship. The data logger inside the ship was powered with 24 volts uninterrupted power supply. The vessel being tracked sailed from Chennai to Kavaratti Island (Lakshadweep) via Tuticorin, Kollam. The same has been shown in Bhuvan (Gateway to Indian Earth Observation), an Indian Geo-portal in figure 10. Bhuvan is a software application which allows the exploration of a 2D/3D representation of the Earth’s surface. The browser is specifically tailored to view India, offering the highest resolution in this region provided with local four languages. Apart from visualization, Bhuvan provides timely disaster support services, free satellite data and products download facility and rich thematic data-sets. Bhuvan is using crowdsourcing approach to enrich its maps and collecting Point of Interest data.

The tracking of ships using Indian satellite has been successfully implemented, tested and commissioned. The positional information has been exported to an Indian Geoportal, Bhuvan. The system can be used for better tracking in Indian waters using domestic satellite. Commercial decisionmaking, fleet management and cost control can be improved by using the tracking system. Presently, only one industry provides ship tracking services using various satellites. The developed system is very cost-effective compared to the commercially available vessel tracking services. Ships can be tracked in the vast Indian Ocean region if INSAT-DRT modem is used, since the INSAT-DRT satellite footprint is large.