The GPS data campaign for the slip surface estimation

Landslide is one of the mass movements at a slope that people known very well. According to Cruden and Varnes’ definition (1992), landslide is a mass movement of soil down the slope toward slip surface or relative to intensive shear strain (Abramson et.al, 1996). Generally, landslide is a local failure which is caused by heavy losses in the economy, and even threatens human security. Thus, mitigation efforts should be made to minimize the risk of landslides. In order to minimize the probability of landslides hazard, it is very important to monitor a material stability of the slope. A common monitoring method done by physical method which it calculates the slope stability value or safety factor? The computation uses physical parameters such as slope geometry, resistance of the forming slope material, hydrogeology, soil-rock layers, weather, and geological structure. Physical parameters can give a realistic output to describe the landslide phenomenon, but it is also related with different kinds of materials and field morphology. Sophisticated and expensive tools are required.

Another alternative to monitor a slope material stability is carried out by a geometric method. It is simpler than the physical method. Early indication of landslide is the formation of cracks on the original ground surface that will become a main scarp of landslide zone. The shape of landslide zone scarp will give a clue about the shape of slip surface, eg., circular or planar. The kinds of landslides may be rotational, translational and compound.

In a landslide zone, the slip surface is a plane that divides a stable and unstable material in the slope. If we can estimate the slip surface location, we can determine the depth and border of the slip surface. This information leads to landslide mitigation. The purpose of this research is to estimate the slip surface location by GPS (Global Positioning Satellite) measurement campaign. The phenomenon of landslide can be identified by the displacement from the monitoring point. This method will be implemented in the landslide case where the soil movement has a slow velocity. The characteristic of landslides is defined by the displacement vector which is derived from the monitoring point in a landslide zone. The type of landslide will be defined by the kind of material forming the slope and soil movement mechanism. The slip surface denotes a border between unstable or moving soil and stable soil, as sliding plane. Location, shape and size of slip surface will be estimated using geometric method, as illustrated in figure 1. 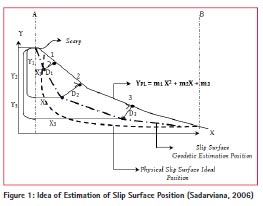 The advantage of the information is to determine the procedure of technical engineering for mitigation that is very useful for an early warning system and evacuation of housing areas.

The geographic position of the research location is 1070000-1070020E and 064240- 064300S at kilometer 88.1 Cianjur-Puncak, Kampung Baru Puncak, Desa Ciloto, Kecamatan Pacet, Kabupaten Cianjur West Java, see figure 2. Ciloto landslide zone is across approximately 40 hectares. The base rock of this area is a quarter of a material that has undergone weathering, which is volcanic tuff breccia’s 3-7 meters depth. The physical property of the soil is loose and the roots are soft, unable to hold the soil together. However, weathering soil resistance to steep slopes when the conditions are dry is not an issue, but when in the presence of saturated water then the material easily collapses. A Geology research unearthed that the Ciloto landslide zone has a soil material category of debris type. Ciloto Peak Region has 5 landscapes units, namely: 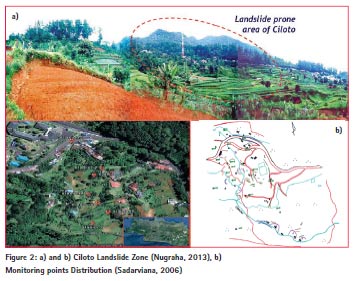 1. Unit I that includes Gunung Lemo;

3. Unit III that includes Puncak, Jember and the surrounding areas;

5. Unit V is the slope of Cempaka hillsides, Tugu and its surrounding areas.

Rain water that is trapped in the region of Unit I will accumulate on the Cijember River, which then becomes ground water. Cijember local groundwater will flow through the narrow water bearing layers that causes increased pressure on local ground water (Purnomo, 1993).

The Ciloto area has a population density of ± 626 man/km2 (based on population census in 2007). The primary jobs of people lie in the agricultural sector, accounting for 62.99% of the population. The Ciloto landslide zone includes a vegetation plantation and fish pond.

Such kinds of land use make the water pressure in the soil higher than usual.

The data obtained from five campaigns by GPS measurement from 2002-2005 includes 15 monitoring points and 2 reference points. In table 1 we see the measurement strategy and data availability. 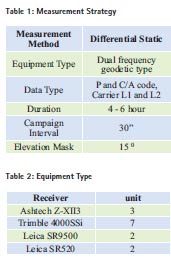 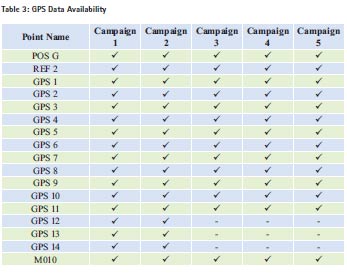 This research has a GPS processing in scheme like in figure 3 and slip surface estimation scheme in figure 4. We can see the distribution of the monitoring points in Figure 2. By processing GPS data, we obtained the position of monitoring points at each campaign in UTM coordinates (E, N, h). Statuses of the displacement of a monitoring point are obtained by the geometric method which is divided in two kinds of mathematical model, namely static and kinematic model. Equation of static model: 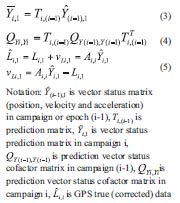 matrix, which is the function of prediction vector status in campaign i as parameter. 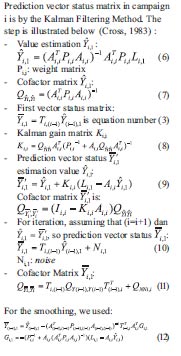 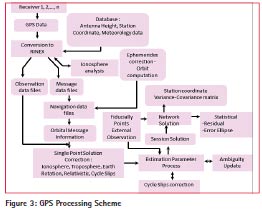 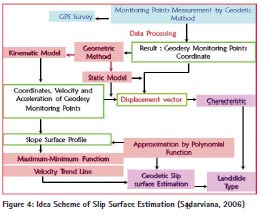 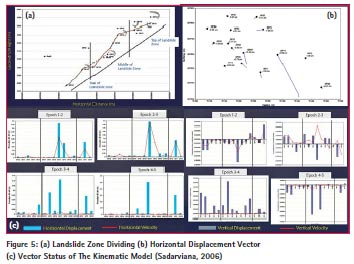 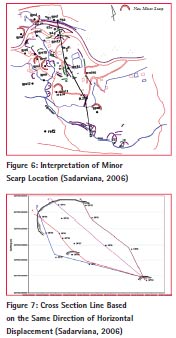 The Ciloto landslide zone is a major landslide hazard zone. There are several minor-zones in a major-zone. Each zone has the same indication of characteristics. A crack usually indicates the top of the landslide zone defined as minor scarp, whether a major or minor zone. If we interpret the vertical displacement of each monitoring point, we will find several minor scarp locations – this can be seen in Figure 6. The field check is needed to get the truth of that interpretation. The facts give a clue that the number of a scarp is the same as the number of slip surfaces. The conclusion supports another assumption that one slip surface effect to similar direction of the monitoring point displacement. As the Ciloto landslide zone has several displacement directions, hence this zone has more than one slip surface.

By the result of a kinematic model, we can make a displacement Velocity Trend Line (VTL) for each monitoring point of a cross section line. We assume that all material has the same velocity on the same plane of slip surface. So we need an intersection of VTL. The illustration of a slip surface formation can be seen in the figure 8. 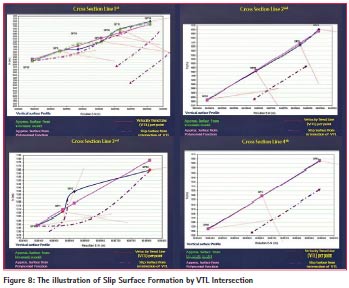 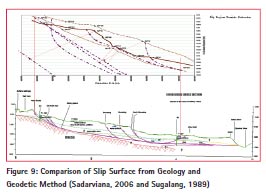 The mechanism of Ciloto soil movement is rotational and translation or compound type because the landslide zone has two kinds of slip surface, namely circular and planar. Each of the monitoring points could have a different direction of displacement in every campaign. It means that one monitoring point can be on more than one slip surface. In the left side of the zone, there is a scarp that is curved and its topography profile is hilly. It is the indication of a rotational slip surface. In the right side of the zone, we did not find a scarp and topography profile that was smooth, i.e., indication of translational slip surface.

From the perspective of a geology investigation, we know that the material of slope was of debris type. Accordingly, the Ciloto landslide zone map and minor scarp location in Sugalang’s research report in 1989 plotted minor scarp interpretation on the same map. The all scarp plotting almost had the same location and there were new scarp developing (retrogressive landslide). See illustration in Figure 6. Soil movement velocity is 5 x 10-5 to 5 x 10-7 mm/ second (very slow). Validation is done by comparison of the geodetic slip surface (result of geodetic method estimation) and slip surface used in geology research done by Sugalang (1989) in the same location.

By geodetic data, soil movement can be quantified and identified as new phenomenon in landslide zones like new scarps or cracks and known displacement vector and velocity of soil.

Characteristics of Ciloto landslide zone are included in a very slow category of 5 x 10-5 – 5 x 10-7 mm/second and various directions of movement.

The geometric method can be used to a location and shape of slip surface estimation by intersection of Velocity Trend Line (VTL) of each monitoring point. Slip surface by geodetic and physical method gives a good conformity. The type of landslide zone is multiple compound (rotational and translational) debris slides.