Before the modernization of Galileo and BeiDou, the integration of multi-GNSS PPP incorporated only GPS and GLONASS constellations (Melgard et al. 2009). Today, with the benefits accrued from multi-GNSS constellation, studies have been undertaken in different GNSS combinations. Lou et al. (2016) analyse the contribution of Multi-GNSS PPP solution to single and dual-frequency raw observations based on 105 MGEX stations. Pan, Chai, and Kong (2017); Zhao et al. (2017) gather improved average convergence in three-dimensional (3D) based on different combinations of GPS, GLONASS, Galileo, and BeiDou constellations. Rabbou and El-Rabbany (2015) assesses the contribution of Galileo to GPS PPP performance. Pan et al. (2017) extend the study by evaluating Galileo PDOP values on a global scale. Recently, Xia et al. (2018) carry out a similar study but by comparing the Galileo input to multi-GNSS PPP solution.

In analysing PPP with respect to conventional GNSS positioning, Soycan and Ata (2011) yield better positioning accuracy in PPP of 10 mm and 20 mm in 2D and vertical components, respectively, from one week daily observations obtained from 60 Ordinance Survey (OS) stations. In a separate study from 24-hour datasets, Soycan (2012) comes up with a better 2D positional accuracy of 6.6 mm and 9 mm in the elevation dimension with a very high precision in the north coordinates of 3.1 mm.

Triple-constellation PPP has become possible due to improvement in Galileo satellite orbit and clock products (Rizos et al. 2013). Most studies on multi-GNSS PPP do not provide a fair evaluation of different combinations of GNSS. In this study, static PPP with triple-constellation GNSS of GPS, GLONASS and Galileo is evaluated in seven combinations: GPS-only, GLONASS-only, Galileo-only, GPS+GLONASS, GPS+Galileo, GLONASS+ Galileo, and the combined PPP solution of GPS, GLONASS and Galileo. The single and combined PPP static solutions are evaluated in terms of positioning performance, convergence period and PDOP.

The GNSS observation models for carrier phase (L) and pseudorange (P) from the satellite (s) to the receiver (r) at carrier frequency (j) are expressed as follows: 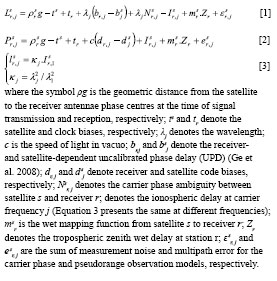 The slant tropospheric delay is the sum of the wet and dry components and are estimated as unknown parameters (Li et al., 2013). Ionosphere-free combination observations are normally employed in PPP to mitigate the first-order ionospheric delay (Kouba and Héroux 2001; Yu and Gao 2017a). From the basic carrier phase and pseudorange observation equations [1] and [2], the associated linearized observation models are expressed as follows: 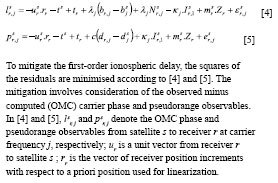 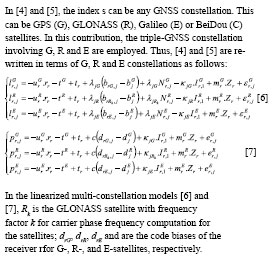 The G- and E-satellites use Code Division Multiple Access (CDMA) whereas R-satellites use Frequency Division Multiple Access (FDMA). In CDMA, each satellite transmits a Coarse/ Acquisition (C/A)-code and a Precision-code (P-code) (Kaplan, 2006).Unlike the modernised GLONASS satellites which can transmit a CDMA signal on a new L3 frequency, originally the system transmitted signals within L1 and L2 bands (Teunissen and Montenbruck 2017). Notwithstanding this, it should be mentioned that individual satellites differ in frequency and signal structure. This calls for the application of Differential Code Biases (DCBs) in order to achieve precise positioning performance.

Multi-GNSS constellation brings about an increased number of biases that need to be accounted for in a PPP algorithm (Schaer 2017). Even though, precise ephemeris eliminates the biases in coordinates and time, receiver and satellite hardware biases need to be accounted for (Cai and Gao 2013). The implementation of multi-GNSS DCB products alongside precise satellite orbits, clocks from IGS multi-GNSS Experiment (MGEX) becomes necessary (Montenbruck, Hauschild, and Steigenberger 2014). Equations [6] and [7] simplify to [8] and [9] when the MGEX products are implemented. 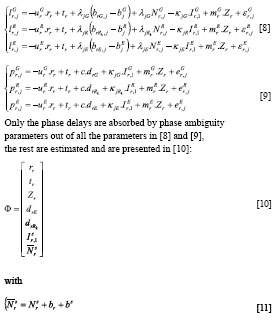 The tips of the receiver-satellite unit vectors form a polyhedron whose volume assists in defining DOP values. Geometric Dilution of Precision (GDOP) defines the precision and accuracy GNSS observations from satellites (Azami, Azarbad, and Sanei 2013). From Altamimi & Gross (2017), PDOP is simply the GDOP without the contribution of the receiver clock (qξ). For the sake of clarity, PDOP (σP) [13] is deduced from the diagonal elements (qx, qy and qz ) of a co-factor matrix of receiver position [12] as expressed in Leick, Rapoport, and Tatarnikov (2015): 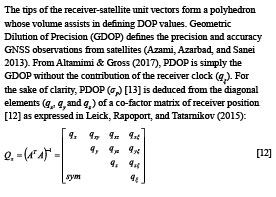 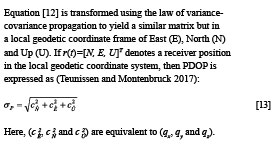 The MGEX stations selected in this study are illustrated in Figure 1. The selection criterion was based on the fact each of these stations tracks at least GPS, GLONASS, and Galileo satellites. In this study, one week observations were used for the year 2017 from DOY 060 to DOY 066. 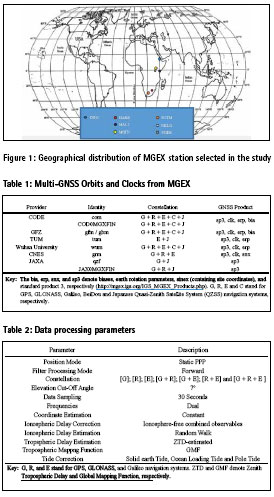 Guo et al. (2017a) and Guo et al. (2017b) identify minor differences between precise ephemeris generated in analysis centres (ACs) and those provided by the Deutsches GeoForschungsZentrum (GFZ). This paper takes advantage of the DCBs computed by GFZ in evaluating the triple-GNSS static PPP performance. To thoroughly evaluate triple-GNSS static PPP performance in different combinations, a state-of-the-art GAMP was used. GAMP is a command line software capable of handling multi-constellation and multi-session data processing written by Zhou et al. (2018). Table 2 depicts the data processing parameters implemented in this study. 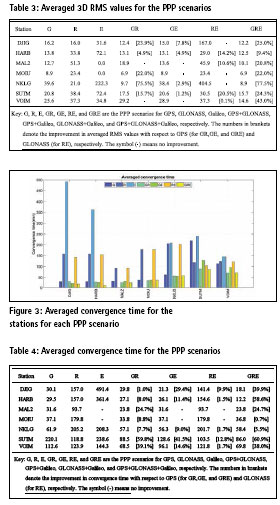 In this contribution, three output files from GAMP are considered: positioning root mean square error (RMSE) values, convergence time, and PDOP. The position errors are estimated with respect to a priori coordinates for the stations contained in the SINEX files from the IGS (International GNSS Service). The convergence time is estimated as the time interval from the start epoch to the convergence epoch (Xia et al. 2018). In this study, PDOP values are used to demonstrate the influence of the receiver-satellite instantaneous geometry of the visible satellites on station positioning.

The positioning RMSE values in North, East, Up and 3D for the seven (7) stations for the selected DOY are averaged and are depicted in Figure 2. The averaged RMS values for the triple PPP solution of GRE yield the best results in N, E, Up and 3D out of all the seven PPP scenarios. The statistical evaluation of the 3D positions is presented in Table 3.

The averaged PPP positioning performance was the best in GRE (11.6 cm) combination among the seven PPP solutions. The performance of dual-constellation of GR (15.4 cm) ranks second, followed by GPS-only PPP with an average of about 19.7 cm. Here, it can be seen that there was no meaningful difference between GPS-only PPP and GPS+Galileo PPP solutions. This slight difference is attributed to insufficient number of visible Galileo satellites contributed to the GPS-only PPP solution (Xia et al. 2018). For the same reason, the static PPP for Galileo was not possible for MAL2 and MOIU stations. This is indicated with zeros (0s) in Table 3.

Furthermore, the combined solution of GE falls on the fourth of the seven different combinations with an average of 19.8 cm. The GLONASSonly (31.6 cm), Galileo-only (61.9 cm) and GLONASS+Galileo (105.4 cm) fall on the fifth, sixth and seventh positions, respectively in terms of positioning accuracy. The combined solution of GPS+GLONASS is necessary in cases of few visible satellites in either of them (Tolman et al. 2010; Li, Zhang, and Guo 2009).

The statistical results indicates better performance for GLONASS-only static PPP solution than that of GLONASS and Galileo combined solution. The poor static PPP solution in the GLONASS+Galileo PPP combined solution may be attributed to both reduced number of Galileo visible satellites and poor orbit and clock accuracy of Galileo (Xia et al. 2018). As can be seen in Table 3, the positioning accuracy improves with increase in number of GNSS-constellations. The averaged 3D RMS value for NKLG was the most outstanding with an improvement of 77.5% in the triple-constellation. 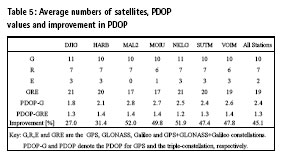 In this contribution, static PPP using tripleconstellation GNSS was assessed in terms of positioning performance, convergence time, and PDOP. GNSS observations from seven (7) MGEX stations spread over Africa were analysed for DOY 060 to DOY 066 for year 2017 in GAMP.

The observations were analysed in seven different GNSS PPP solutions. Based on the results, the following conclusion are drawn:

2. The convergence performance of triple-GNSS PPP was the best for all seven different static-PPP scenarios.

3. The number of satellites for the triple-constellation static PPP was significantly better than that of GPS-only PPP. GPS-only PPP had better satellite visibility than GLONASS and Galileo-only PPP.

Ceylan, Ayhan, Cemal Ozer YIGIT, Salih ALCAY, and Behlul Numan OZDEMIR. 2015. “EVALUATING THE PERFORMANCE OF KINEMATIC PPP AND DIFFERENTIAL KINEMATIC METHODS IN RURAL AND URBAN AREAS.” Pp. 17–21 in From the Wisdom of the Ages to the Challenges of the Modern World.

Héroux, P. et al. 2004. “Products and Applications for Precise Point Positioning – Moving Towards Real-Time.” Proceedings of the 17th International Technical Meeting of the Satellite Division of The Institute of Navigation (ION GNSS 2004).

Rizos, Chris et al. 2013. “The IGS MGEX Experiment as a Milestone for a Comprehensive Multi-GNSS Service.” in Proceedings of the Ion Pacific Pnt Meeting.

Shen, X. and Y. Gao. 2006. “Analyzing the Impacts of Galileo and Modernized GPS on Precise Point Positioning.” in Proceedings of the 2006 National Technical Meeting of The Institute of Navigation.

Steigenberger, P., A. Hauschild, O. Montenbruck, C. Rodriguez-Solano, and U. Hugentobler. 2013. “Orbit and Clock Determination of QZS-1 Based on the CONGO Network.” Navigation, Journal of the Institute of Navigation.