Space Weather, from the Sun to the Earth, the key role of GNSS

• propagation through the ionosphere

In this part we will focus the GPS system, propagation through ionosphere, VTEC and ROTI index.

The standard format for the GPS data is the Rinex format. The first training is an introduction for processing the Rinex file. We use the example of ykro3500.09d.Z (site of Yamoussoukro/ Cote d’Ivoire on 16 December 2009). In the rest of this section we show all the parameters that the students can deduced from the GPS data during the training. 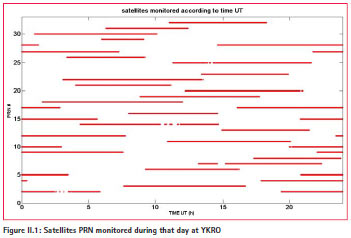 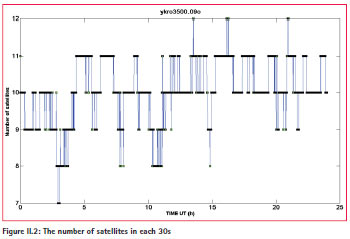 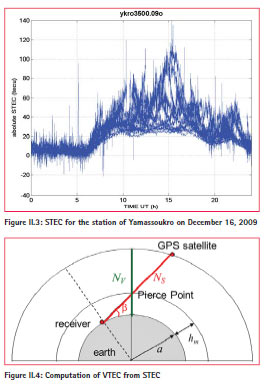 Two exercises make it possible to understand the relative complexity of the Rinex 2.10 format (ftp://igs.org/pub/data/ format/rinex210.txt) for recording GPS signal measurements. The visualization of the constellation of GPS satellites followed by this receiver makes it possible to develop a first Matlab script. Figure II.1 plot the distribution of the PRN satellites monitored during the day selected as a function of the UT time.

Figure II.2 gives the number of satellites monitored in each 30s time, according to the UT time for the selected station of Yamassoukro.

The GPS signal: STEC and VTEC

The following equations give the pseudo ranges and the phases for the two frequencies of the GPS receiver (Leick, 1995; Schaer, 1999; Hoffman-Wellenhof et al., 2001). – Equation II.1, Pseudo range:

α are others terms which are in second order. P is the pseudo range in m.

There is an additional term B which is the ambiguity function which is unknown. L is the length of the phase path expressed in m.

In the equations of the pseudo-range and phase, two layers traversed by the signal transmitted by the satellite modify this signal. These are the Troposphere and the Ionosphere (see figures I.4e and Figure I.5b). 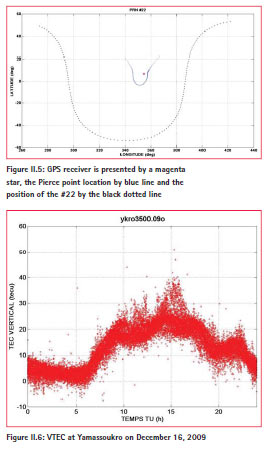 Figure II.3 illustrates the diurnal STEC (Ns) deduced from the GPS signal by using the equation II.3, for the selected station of Yamassoukro in Côte d’Ivoire We use of the law of the secant to determine the Vertical Total Electron (VTEC) (Nv) from the STEC (Ns); This computation requires the knowledge of the elevation angle β and therefore the position of the satellites. Figure II.4 presents the computation of the VTEC.

The Earth radius (6370 km) is given by the letter a, and hm is the height of reference which is taken at 420 km (this height is variable from one scientist to another). 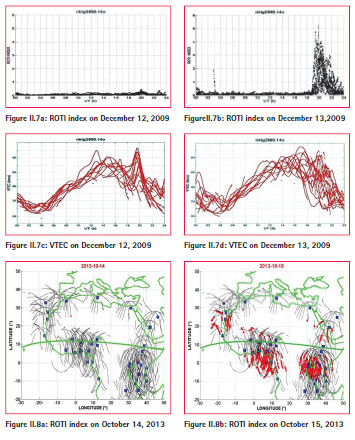 Figure II.6 presents the VTEC computed with the equation II.4. This figure makes it possible to appreciate the diurnal variation of the VTEC which grows during the day because of the photo ionization and which decreases at night.

The dispersion of the points at given instant is principally due to the fact that they are not on the same geographical position, the Pierce points are distant from the position of the station.

and then the ROTI index which is RMS of ROT values with a time span of 10 mn and only for data above 20° elevation to avoid the influence of multi paths.

We have developed a Matlab software (‘calcul_roti_v41.m’) to calculate the ROTI index for daily Rinex files. An example is done for two consecutive days for NKLG (Gabon), on December 12 and 13, 2009 (DOY=255, DOY=256). We see no variation in the first day (Figure II.7a) and high Roti index after the sunset of the day after (Figure II.7b).There is another index for scintillation, the index S4 which requires a dedicated receiver ISM (Ionospheric Scintillator Monitor).

where I is the intensity of the signal and <> is the mean.

From time series, we are able to plot some pertinent representation of the phenomena.

Figure II.8a shows no variations of the ROTI index in all the stations over Africa on October 14 October 2013. On the contrary, on October 15 2013, we can observe large values of the ROTI index near the northern and southern crests of the equatorial anomaly (red color). Azzouzi et al., 2015 explained the disappearance of the scintillations, revealed by the ROTI index, as due to a high speed solar wind flowing from a solar coronal hole. In this case the solar disturbance facilitate the propagation of the GPS signal 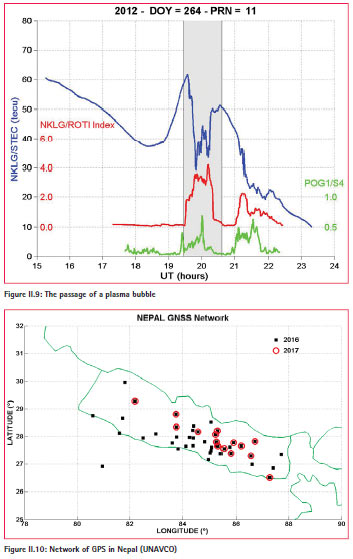 In this part we have presented the ionospheric parameters that can be deduced from the GPS data, mainly the Vertical Total Electron Content (VTEC) and the ROTI index. These two parameters allow the study of the variations of the ionospheric ionization as well as the existence of ionospheric scintillations .There are many websites on which you can get free GPS data (daily 30s data) and study the ionosphere. These sites are given in table 1.

The International Committee on Global Navigation Satellite Systems (ICG), established in 2005, has encouraged tangible international cooperation. Leading global satellite operators have coordinated their GNSS services to provide global coverage in satellite-based positioning, navigation and timing in order to benefit civil, commercial and scientific users worldwide. ICG acts as a platform for open discussion and the exchange of information under the umbrella of the United Nations, and as such promotes the use of GNSS technology for environmental management and protection, disaster risk reduction, agriculture and food security, emergency response, more efficient surveying and mapping, and safer and more effective transportation by land, sea and air.

To support the work of ICG, Office for Outer Space Affairs was designated as the executive secretariat of ICG. In that capacity and as the body leading ICG’s Working Group C on Information Dissemination and Capacity Building, the Office, through its programme on GNSS applications, each year co-organizes and cosponsors a wide range of seminars, training courses and workshops. Those activities usually bring together a large number of experts, including specialists from developing countries, to discuss the GNSS applications in various fields of the world economy.

Pursuant to the ICG workplan and its recommendations, the ICG Working Group on Information Dissemination and Capacity Building, in partnership with members, associate members and observers of ICG and international entities focused on: (a) disseminating information through a network of the information centres hosted by the regional centres for space science and technology education, affiliated to the United Nations; (b) promoting the use of GNSS as tools for scientific applications; and (c) building the capacity of developing countries in using GNSS technology for sustainable development. The detailed information is available on the ICG information portal at: http://www.unoosa. org/oosa/en/ourwork/icg/activities.html

Information dissemination through a network of the information centres hosted by the regional centres for space science and technology education, affiliated to the United Nations

The ICG information centres are hosted by the regional centres for space science and technology education, affiliated to the United Nations. The regional centres are located in India and China for Asia and the Pacific, in Morocco and Nigeria for Africa, in Brazil and Mexico for Latin America and the Caribbean and in Jordan for West Asia. The main objective of the ICG information centres is to enhance the capabilities of member States to use GNSS and related applications at the regional and international levels so as to advance their scientific, economic and social development. The centres coordinate their activities closely with ICG and its Providers’ Forum through the ICG executive secretariat. 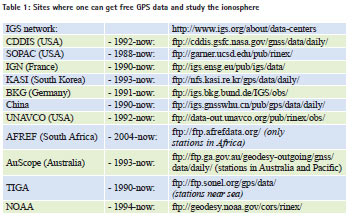 This paper presented the physics of space meteorology as well as the teaching developed for the use of GNSS in meteorology of the Space. The representatives of the following countries participated in the training courses: Algeria, Burkina Faso, Cameroon, Côte d’Ivoire, Egypt, Morocco, Niger, the Republic of the Congo (RC), the Democratic Republic of the Congo (DRC), Senegal, Tunisia, and Vietnam.

To date, following the training carried out since 2 decades, there are research groups in meteorology of the Space in Algeria, Burkina Faso, Cameroon, Côte d’Ivoire, Egypt, Morocco, RC, DRC, Senegal and Vietnam. Each 2 years a regional school is carried out in Africa. The next will take place in Abidjan in Ivory Coast from 16 to 28 October 2017, the professors are from Algeria, Burkina Faso, Côte d’Ivoire, France and Morocco.

Th e schools aimed to promote (1) the emergence of students on Space Weather with works that can lead to PhD (38 PhD in 25 years), (2) to work in an international context giving rise to publications and (3) To favor the implantation of GNSS receivers for scientific purposes, especially in Africa, which lags far behind other continents.

The activities and opportunities provided through the ICG result in the development and growth of capacities that will enable each country to enhance its knowledge, understanding and practical experience in those aspects of GNSS technology that have the potential for a greater impact on its economic and social development, including the preservation of its environment.