Soil Moisture is a key component of water cycle budget [6]. It is fundamental measurement in the fields of hydrology, flooding, agriculture etc. Various earth observation satellite missions have studied surface soil moisture using on-board sensor data. The NASA Soil Moisture Active Passive (SMAP) mission and ESA Soil Moisture and Ocean Salinity (SMOS) mission were launched to study soil moisture using L-band radiometers to address the problems because of larger pixel sizes (~10’s km) of earth observation satellites. However, there is no global data set is available in order to validate the soil moisture estimated using SMAP and SMOS missions [5,6]. International Soil Moisture Network (ISMN) was established in 2009 to support SMAP mission. However, it is not yet fully established to cover the global stations like International Ground Station (IGS) Network does. Thus a global network of in-situ comparable measurements was needed to validate the soil moisture estimated using these missions. GNSS satellites that operate at L-band frequency (1.2 to 1.6 GHz) can provide these in-situ measurements for validation [5-7]. At these frequencies microwave signal is less perturbed by atmospheric effects and can better penetrate clouds and heavy rains [7]. This ensures all weather availability of in-situ soil moisture measurements using GNSS signals.

Along with carrier phase and code observables, GNSS receivers also report the signal-to-noise ratio (SNR) of receiver. SNR is the ratio of signal power to the noise, which is the measurement of efficiency of receiver tracking algorithms [1]. SNR measured through carrier tracking loop thus has direct relation with carrier phase error due to multipath. Multipath effects are directly related with the dielectric properties of the reflecting ground surface. These multipath signals result in the oscillatory variations in the SNR [4-5]. Thus SNR measurements from GNSS receiver can be used to estimate the geophysical parameters such as soil moisture, vegetation heights, snow depth and water depth. A number of studies have been reported retrieval of soil moisture using GPS signals in single antenna mode [1-8]. NavIC is newly established regional constellation of 3 Geostationary (GEO) and 4 Geosynchronous (GSO) navigation satellites providing the data at L5 (1176.45 MHz) and S bands (2492.028 MHz). The present work reports the very first attempt of utilising indigenously developed NavIC-GPS-SBAS (NGS) user receiver to retrieve soil moisture using carrier phase multipath as sensed by the receiver.

Indigenously developed NGS receiver by M/s. Accord Ltd. was used to record the NavIC and GPS signal strengths. Data was collected at Space Applications Centre (SAC), Ahmedabad for continuously 4 days to log the SNR measurements. Elevation angle cut-off for the receiver was kept at 5o. SNR data for NavIC L5 (1176.45 MHz) and GPS L1 (1575.42 MHz) were logged using L1-L5-S tri-band antenna. Antenna was mounted at a height of 1.3 m from the ground with soil as the reflecting surface and with no other reflecting surface in 225 m2 area surrounding the antenna (figure 1a).

In-situ measurements of volumetric surface soil moisture (in m3.m-3) were done using a soil moisture probe by M/s. ICT International Ltd. at regular interval of 3 hrs for 4 days for validation of estimated soil moisture values (figure 1b) during day time between 1000 hrs to 1800 hrs.

As stated earlier, reflected multipath signals cause temporal variations in the SNR. The changes in the geophysical parameters such as soil moisture affect the amplitude, frequency and phase of the SNR. When there is no multipath, SNR is equivalent to direct amplitude of the received signals. In presence of multipath, SNR is combination 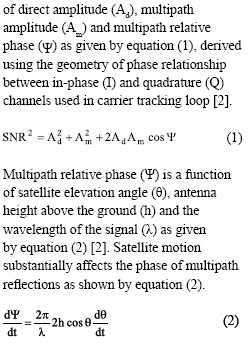 These multipath reflections are directly proportional to the dielectric properties of the reflecting surface and thus are directly related to the geophysical parameter such as soil moisture. 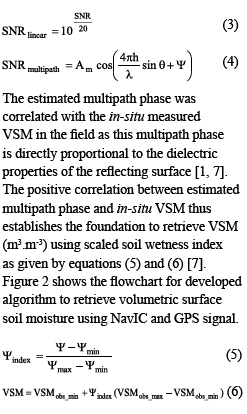 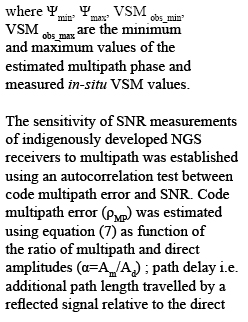 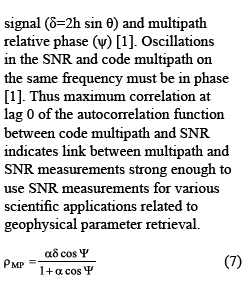 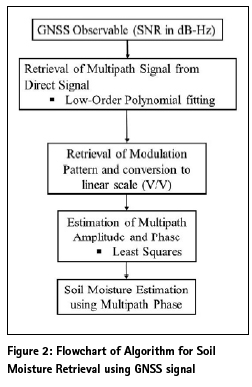 SNR measurements collected using NGS receiver were analysed for estimation of volumetric soil moisture. Satellite motion affects the multipath phase and thus SNR measurements were checked for oscillatory variations due to multipath. It was observed that no significant oscillations were observed in SNR due to multipath above the elevation angle of 30o for both NavIC and GPS signals. SNR observations between 15o to 27o and between 5o to 26o elevation angles were selected for retrieval of soil moisture using NavIC L5 and GPS L1 signals; respectively; in the present study.

Polynomial up to order 3 were fitted to SNR measurements from NavIC L5 and GPS L1 signals. R2 values varied from 51% to 63% for polynomial fit of order 3. Polynomial fit values correspond to direct signal from satellite whereas the residuals of the polynomial fit correspond to the contributions by multipath. Residual SNR affected due to multipath was thus retrieved and converted to linear scale as shown in figure 3. Variations due to multipath were clearly observed in residual SNR as can be seen from figure 3. 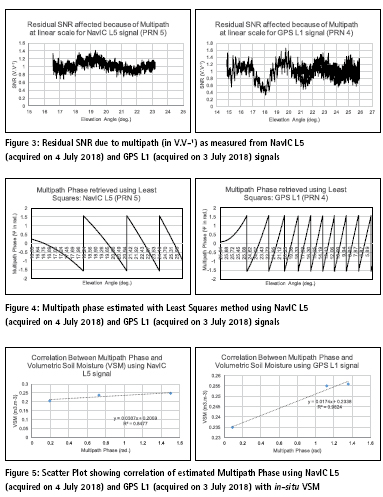 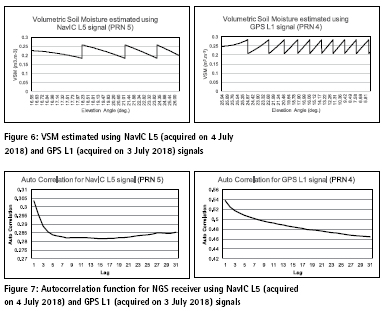 A linear relation was observed between field collected VSM and retrieved multipath phase. R2 of 0.84 and 0.98 were observed between in-situ collected surface soil moisture and estimated multipath phase using NavIC L5 and GPS L1 signals; respectively as shown in figure 5. This validation of linear relation between soil moisture and the multipath phase thus was further used to estimate VSM at every second time interval. VSM values measured in the field showed variation from 0.18 m3.m-3 to 0.25 m3.m-3 for different days.

VSM was retrieved separately for each day. Figure 6 show the sample of volumetric surface soil moisture estimated using NavIC L5 and GPS L1 signals. The results obtained for VSM using GPS L1 signal were observed to be consistent with those already reported in earlier literature. Comparison between VSM retrieved using GPS L1 and NavIC L5 could not be carried out as observations were done at different time intervals. However, VSM estimated using NavIC signal was validated using in-situ data collected with soil moisture probe in the field; for some of the sample values. R2 values of 0.78 to 0.94 were observed between the VSM retrieved using NavIC L5 and in-situ data. The results obtained for VSM using NavIC L5 signal were thus encouraging to further extend the study for different soil types and at different locations.

The authors are thankful to Shri. D. K. Das, Director, Space Applications Centre (SAC), Ahmedabad, for providing the opportunity to carry out this work. The authors are very grateful to Mr. V. K. Tank, Head/NAD; Mr. A. P. Shukla, GD/NAG and Mr. N. M. Desai, DD/SSAA for their constant support, encouragement and keen interest in this work. Authors also extend their thanks to D r. Nikhil Lele, scientist/EPSA/SAC and Dr. Bimal Bhattacharya Head/AED/EPSA/ SAC for providing the instrument for insitu data collection. This work is carried out under the TDP/R&D program of Space Applications Centre, Ahmedabad, India.