3D modeling of cities has become very important as these models are being used in different studies including energy management, visibility analysis, 3D cadastre, urban planning, change detection, disaster management, etc. (Biljecki et al., 2015). 3D building models can be considered as one of the most important entities in the 3D city models and there are numerous ongoing studies from different disciplines, including vast majority of researchers from geomatics and computer sciences.

The two main concepts of reconstructing 3D building models can be given as procedural modeling (Musialski et al., 2013; Parish and Müller, 2001) and realitybased modeling (Toschi et al., 2017a), the latter including photogrammetry and Airborne Laser Scanning (Fig. 1). The concept of procedural modeling is based on creating rules (procedures) that reconstruct 3D models automatically (i.e. dimensions and location of starting point of a rectangular prism). On the other hand, reality-based modeling approaches rely on data gathered with 3D surveying techniques to derive 3D geometries from surveyed data. While procedural modeling concept holds the main advantages of data compression and savings from hardware usage, it comes at two important costs, i.e. low metric accuracy and issues with control ability on the model, especially for complex structures.

There are many approaches presented in the literature for 3D building modeling, which rely on point clouds (Haala and Kada, 2010; He et al., 2012; Lafarge and Mallet, 2012; Sampath and Shan, 2010), often coupled with ancillary data such as building footprints. However, reliable footprints are not always available. Moreover, these existing methodologies are not found to be fully exploiting the accuracy potential of sensor data (Rottensteiner et al., 2014). For these reasons, we are motivated to develop a methodology to reconstruct 3D building models without relying on such ancillary data. The method focuses on the segmentation of photogrammetric point clouds and RGB orthophotos for the successive reconstruction of 3D building models. Using a semi-automated approach, we detect vegetation (and/or other) classes on the image and mask/ separate these regions in the point cloud.

Therefore, it becomes easier to process the rest of the point cloud for a segmentation and classification in order to extract the buildings from the point cloud. The paper proposes a methodology to extract and model buildings from photogrammetric point clouds segmented with the support of orthophoto. After a review of related works, the developed methodology is presented. Results are discussed at the end of the paper. 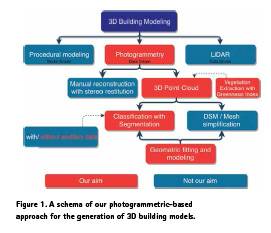 In the last years, thanks to the availability of dense point clouds coming from LiDAR sensors or automated image matching (Remondino et al., 2014), there have been many studies on 3D building reconstruction from dense point clouds. Most of them are based on extraction of roofs, generally using ancillary data such as building footprints, and then fitting geometric primitives (Dorninger and Pfeifer, 2008; Malihi et al., 2016; Vosselman and Dijkman, 2001; Xiong et al., 2014). As our approach (Fig. 2) is based on orthophoto and point cloud segmentation, in the next sections, a state-of the-art of such methods is shortly given. Our aim is to reconstruct Level of Detail 2 (LoD2, (Biljecki et al., 2016)) 3D building models with optimum number of vertexes. For this reason, we are not using a method that creates a mesh using all the available points in the point cloud. Instead, we prefer to employ a method that generates lightweight polygonal surfaces. In the literature there are different kind of 3D building reconstruction methodologies, which we could classify based on the used data: footprints (Müler et al., 2006), sparse point clouds, procedural modeling (Müller et al., 2007; Parish and Müller, 2001; Vanegas et al., 2010), combined methodologies (Müller Arisona et al., 2013), hybrid representation (Hu et al., 2018) and deep learning approaches (Wichmann et al., 2018).

We propose an automated methodology that aims to extract buildings from photogrammetric point clouds for 3D reconstruction purposes. The method combines a series of processes including: (i) vegetation masking through orthoimage segmentation, (ii) point cloud segmentation (vegetation, buildings, streets, ground level objects – GLO) with the aid of the image masking results and (iii) 3D reconstruction of the building class.

We used two different datasets for developing and testing our method.

The first is derived from ISPRS benchmark dataset of Dortmund City Center (Nex et al., 2015). As the original dataset contains data from different sensors including terrestrial and aerial laser scanners, we only used the point cloud generated using oblique images acquired with the IGI PentaCam, with the GSD of 10cm in the nadir images, and 8-12cm in the oblique views. The average density of the cloud is ca 50 pts/sqm.

The second dataset was flown over the city of Bergamo (Italy) with a Vexcel UltraCam Osprey Prime by AVT Terramessflug, with average GSD of 12cm for both nadir and oblique images (Gerke et al., 2016; Toschi et al., 2017b). The resulting dense point cloud has an average density of 30 pts/sqm.

Segmentation of the orthophoto

We used Kohonen’s Self-Organizing Map (SOM, Fig. 3), which is an Artificial Neural Network (ANN) designed for clustering the given data into number of clusters that is defined by the number of layers (González-Cuéllar and Obregón-Neira, 2013). By its design, SOM has an unsupervised approach for the training and with this training the network generates a map of the given data (Kohonen et al., 2001). The neuron’s weights are calculated as: 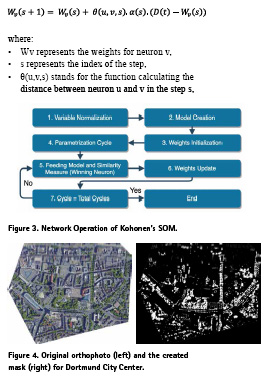 The datasets used in our tests have very high-resolutions although, in most cases, pixel-based segmentation and classification are not ideal for such imagery. Yet, as our image segmentation goal is to separate only the vegetation from the others, pixel-based segmentation met our need. In order to segment the orthophotos, a SOM network is generated with 9 layers and image data is prepared as a data matrix, where each row vector of the matrix represents one band of the image. The original orthophoto and the generated vegetation masks for the Dortmund dataset are shown in Figure 4. Segmentation of the 3D point cloud

The region growing segmentation algorithm built-in Point Cloud Library (PCL) (Rusu and Cousins, 2011) is used in order to segment 3D point cloud with the aim of classification into buildings and GLOs. The algorithm (Fig. 5) basically detects points which are generating a smooth surface if they gather together, and this is decided by comparing the surface normal of the neighbour points.

In order to make this comparison, the algorithm first calculates the curvature values for each point, which is based on normal. As the points with minimum curvature are placed in planar regions, all the points are sorted with respect to their curvature values in order to detect the seed points with minimum curvatures. The points are labelled till there are no unlabelled points left. Before applying the region growing segmentation to the point cloud, we project the vegetation mask previously generated onto the point cloud (Fig. 6). This allow to label points as vegetation or non- vegetation and to automatically generate a masked 3D point cloud (Fig. 7).

The region growing algorithm is then applied to the masked point cloud, adjusting minimum-maximum number of points per cluster, normal change threshold as well as curvature threshold. This allow to distinguish buildings, streets and GLO assigning a different ID per point. Merging all segments, a classified and segmented point cloud is obtained (Fig. 8). 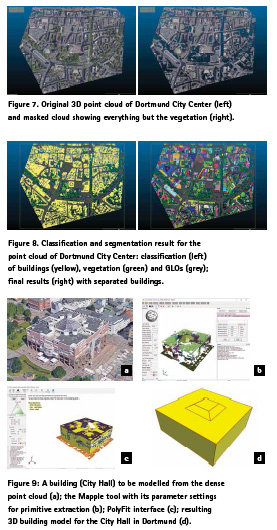 Once building structures are identified in the point cloud, the geometric modeling is performed using Mapple (Nan, 2018) and PolyFit (Nan and Wonka, 2017) tools. Mapple is a generic point cloud tool that can handle normal estimation, down sampling, interactive editing and other functions. Mapple is used to extract planar segments from the point cloud based on RANSAC algorithm (Fig. 9a). Then, accepting these preliminary planes as candidate faces, PolyFit, creates an optimized subset based on angle between adjacent planes (θ<10°), and minimum number of points can support both of the segments (select minimum of number of points in segment 1 and 2, divide this amount by 5). Using this optimum subset of faces, a face selection is performed (Fig. 9c) based on the following parameters;

– Fitting, i.e. a measure for the fitting quality between the point cloud and the faces, calculated with respect to the percentage of points that are not used for the final model;

– Point coverage, i.e. a fraction related to bare areas in the model, calculated with respect to the surface areas, candidate faces and 2D α-shapes, which is basically a projection of points to the plane;

– Model complexity, i.e. a term to consider the holes and outgrowths, calculated as a ratio of sharp edges and total amount of intersections of the pairs.

These parameters can be adjusted in an iterative way during the 3D reconstruction process, which includes refinement, hypothesizing, confidence calculations and optimization procedures. Figure 9d and Figure 10 show examples of derived 3D building models from the Dortmund point cloud.

The proposed methodology, which includes automated image segmentation for vegetation mask generation, separation of the point cloud using this mask, segmentation and classification of the separated point clouds, and 3D reconstruction, was tested also on the Bergamo datasets. The given orthophoto and generated vegetation mask are shown in the Figure 12b whereas the application of the image mask to the dense point cloud produced the segmented point cloud of Figure 12b. Separation of the vegetation makes it easier for the following steps of point cloud segmentation and classification. The classification results shown in Figure 12c-d, and 3D building reconstruction results shown in Figure 13 demonstrate that our methodology also provided significant results in case of dense urban areas. Yet, we faced some cases where we could not manage to reconstruct the building due to a lack of points representing the ground level. An example can be seen in Figure 14. The paper reported an ongoing work for the identification and modelling of buildings in photogrammetric point clouds, without the aid of ancillary information such as footprints. The achieved results show that pixelbased orthophoto segmentation is successful even for high-resolution images to generate a vegetation mask. Such mask aids the classification of point clouds to identify man-made structures. The point cloud segmentation approach, based on region growing algorithm, shows that this method can be a proper way to distinguish objects within the point cloud (i.e. building roofs, facades, roads, pavements, trees, grass areas), thus, useful for classification and modelling purposes. The geometric reconstruction of buildings, based on RANSAC and plane fitting, produced successful results although, in case of low points on facades or roofs, the modelling is not completely correct.

Among all processes, there are two main tasks handled manually at the moment: the setting of the region growing parameters, and the setting of segment numbers from the point clouds after segmentation for merging them. However, as this is an ongoing research, these two steps are going to be automated in the future. As other future works, we would like to bring all functionalities into one environment and upscale the methodology to an entire city. Acknowlegments The authors are thankful to Liangliang Nan (3D Geoinformatics group, TU Delft, The Netherlands) for his kind support.

Schindler, K., 2012. An Overview and Comparison of Smooth Labeling Methods for Land-Cover Classification. IEEE transactions on geoscience and remote sensing 50, 4534-4545.

The paper was presented at 13th 3D GeoInfo Conference, 1–2 October 2018, Delft, The Netherlands.